Help Santa get his hat back from Rudolph in NetEnt's Santa vs Rudolf slot. The game comes with five reels, 20 reels and win-both-ways paylines. Playable on all devices from 20p to £10, it includes bonus features like shifting Wilds, re-spins and free spins feature with two additional bonus features. Spin the reels of Santa vs Rudolf for the chance to win 1,000x your bet for the spin! 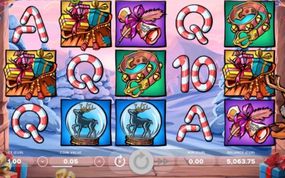 Santa vs Rudolf slot is NetEnt’s latest Christmas-themed slot game that comes with five reels, 20 paylines and both ways payouts. Available to play on all devices, you can enjoy the gameplay from 20p up to £10 per spin. The game comes with shifting Santa and Rudolf Wilds with re-spins and free spins. The shifting wilds are used to fill meters which trigger two more bonus features based on Santa and Rudolf. The maximum payout you can receive when playing Santa vs Rudolf is 1,000x your bet.

The Christmas theme in Santa vs Rudolf slot is evident as soon as you open the game. The action in the slot takes place at the North Pole at Santa’s workshop. The reels are placed inside a transparent frame giving an uninterrupted view of the snowy landscape in the background. Santa is to the left of the reel set, while Rudolf is on the opposite side with Santa’s hat on his head. The game buttons are placed beneath the reels and are marked well. As you spin the reels, you can hear a cheerful Christmas music and sounds which just add to the quality of the slot.

The symbols in Santa vs Rudolf slot can be split into two groups. The group of low-value symbols includes the standard playing card 10, J, Q, K and A with a candy cane twist. The group of high-value symbols consists of letters to Santa, snow globe, reindeer collar, a sack of gifts, and Santa’s sleigh. Winning combinations in the game are formed both ways, from left to right and from right to left.

How to Play Santa vs Rudolf Slot

Santa vs Rudolf is very simple to play mainly because you need to set only one variable before pressing the spin button. Since the 20 paylines are fixed, you only need to decide on your coin value. You can set your coin value by pressing the up and down arrows of the COIN VALUE box. Once you’ve set this variable, all you need to do is press the big button with a circular arrow at the bottom centre of the screen.

If you want to enjoy the gameplay of Santa vs Rudolf without pressing the spin button after each round, click on the autoplay button. You need to select the number of rounds to be played automatically and the reels will start spinning for your current bet. You can stop this feature at any given time by pressing the stop button.

How To Win Santa vs Rudolf

Winning payouts in Santa vs Rudolf are awarded for landing combinations of identical symbols on the paylines. As we have mentioned before, winning combinations are formed both ways. The payouts start with the standard playing cards for landing three, four or five symbols. They are followed by Santa’s wish list, the reindeer snow globe, Rudolf’s collar, Santa’s sack of presents and Santa’s sleigh. Santa’s sleigh pays the most with three, four or five on a payline awarding 1, 7.5 or 25 times your stake.

When the two walking wilds collide on the reels, a new symbol is created and the free spins round begins. You are awarded ten free spins with a possibility to get up to 30 free spins if you merge up to three Rudolf and Santa wilds. There are three meters above the reels corresponding to the wilds that appear during the feature. When either of the two wilds moves off the reels, the corresponding meter fills one space. If one of the meters get filled before the end of the feature, a corresponding bonus feature will be triggered.

This feature is triggered when you fill the Rudolf meter. You are awarded three spins with five Reindeer wilds randomly placed on the reels for each spin.

The feature is triggered when you fill the Santa meter. A new screen opens with three item sets. You click on one of the five items to win a prize which could be a cash prize, a multiplier increases or a feature end.

The RTP of Santa vs Rudolf is 96.35% which makes the game an above-average online slot.

Our Santa vs Rudolf Slot Review

Santa vs Rudolf is an excellent game for the upcoming Christmas holidays. It comes with interesting features which are both funny and rewarding.

If you want to try Santa vs Rudolf slot, claim your welcome offer from the casinos promoted here at Slotswise and spin the reels of Santa vs Rudolf for the chance to win big!