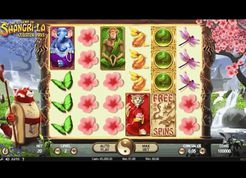 With a picturesque backdrop and some incredible design throughout, you’re sure to be visually pleased when you play The Legend of Shangri-La: Cluster Pays video slot. Think running waterfalls, cherry blossoms and wood-carved dragons.

Coming from NetEnt, this slot looks how you might expect, and by that we mean great. Not only is the design on-theme, but it’s also done to an incredibly high standard. During your time playing The Legend of Shangri-La: Cluster Pays, you’ll be accompanied and guided by a fox that some say is also a monk-like figure.

Aside from him, you’ll notice the incredibly designed reel symbols too, the ones that will (hopefully) land in series of combinations to reward you with cash payouts. You can land combinations of butterflies, Koi fish, dragonflies, flowers and three guru figures in the form of a monkey, a tiger and an elephant.

As is the case when playing all video slots, the amount you’ll receive in return for landing these symbols depends on which ones you land and of course how many.

Before you spin to win playing The Legend of Shangri-La: Cluster Pays, you’ll need to decide on your stake for each go, and doing so is easily done.

As is the case with most, if not all NetEnt slot games, the two variables that decide your total stake are the coin value and the level at which you play. While the level usually effectively refers to the amount of coins per payline, The Legend of Shangri-La: Cluster Pays slot doesn’t feature typical paylines.

Instead, as the name suggests, this video slot features a cluster pay system, but we’ll explain more on that later.

To establish your stake per spin, you’ll need to select your coin size, with those available ranging between 1p and £2, the level that you’d like to play on from either one to ten. Your coin size will be multiplied by 10 initially, and then again by the respective number for which level you’re playing at.

Once your stake has been established, you can start playing The Legend of Shangri-La: Cluster Pays, setting the reels off in search of cash sums! To do this, you can either click the central spin button that’s aptly designed as the yin-yang symbol, or use the ‘Auto Play’ feature to set the reels spinning consecutively either 10, 25, 50, 100, 250, 500 or 1,000 times.

The Legend of Shangri-La: Cluster Pays has many different features that contribute to you winning cash sums. One of which, and perhaps the most focal, is the cluster pays feature itself.

A symbol becomes part of a cluster if it matches the one that is horizontally or vertically adjacent to it. When nine or more of the same symbols form a cluster in this way, you’ll be awarded with a win.

The amount you’re awarded for a cluster is dependant on the symbol involved, with the three gurus representing those of higher value. Because of the cluster pay system when playing this slot, you need to land more symbols that you otherwise would playing different games.

While the majority of video slots accept combinations of three or more symbols for a cash payout, the minimum requirement when playing The Legend of Shangri-La: Cluster Pays stands at a nine.

The Legend of Shangri-La Bonus Rounds

Random Substitutions - When two or more clusters of the same symbol land, this feature is activated and at least one substitution symbol will be added to the reels, adjacent to the cluster that already exist.

Sticky Re-Spins - Two or more non-winning clusters landing will activate this feature, making the feature symbols stick to the reels while the rest of the symbols spin again. This feature continues until new feature symbols land on the reels, ultimately rewarding you with a win.

Nudge Reel - If two Free Spins Symbols land and other lands to the right of them, but outside the visible area, the third Free Spins Symbol can be nudged onto the reels to help activate some free spins.

Like we said, NetEnt can do no wrong and their latest addition to the slots scene will help all spinning fans continue to hold them with high regard. The Legend of Shangri-La; Cluster Pays is an exceptional online video slot with a lot going on.