Experience the Phantom of the Opera on the five reels of The Phantoms Curse slot! It comes with 40 fixed paylines and features Wild substitutions, Scatter symbol and three Bonus symbols that act as Wilds. You can benefit from Free Spins round and the Pick-and-Click feature, as well as land winning combos with the help of the Sticky Wild Re-Spins.

Themed on the famous Phantom of the Opera novel, The Phantoms Curse slot is part of NetEnt Universal Monsters online slots. With five-reels, four-rows and 40 fixed paylines, it tells the story of the disfigured Phantom who falls for the beautiful Christine. The Phantoms Curse comes packed with exciting features like scatters, wilds and a pick-and-click bonus game. Playable from £0.20 up to £200.00, you can spin for the chance to win the maximum payout of 200x your bet!

Everything in the game is designed with the novel, or the musical, in mind. As soon as you launch The Phantoms Curse, you can see that it is set inside a beautiful theatre. The symbols are placed on a transparent reel set, while the game logo is in the top left corner. The bottom of the screen is reserved for all game buttons. While you’re playing The Phantoms Curse slot, you are accompanied by a classical music soundtrack that just adds to the mystical ambience. 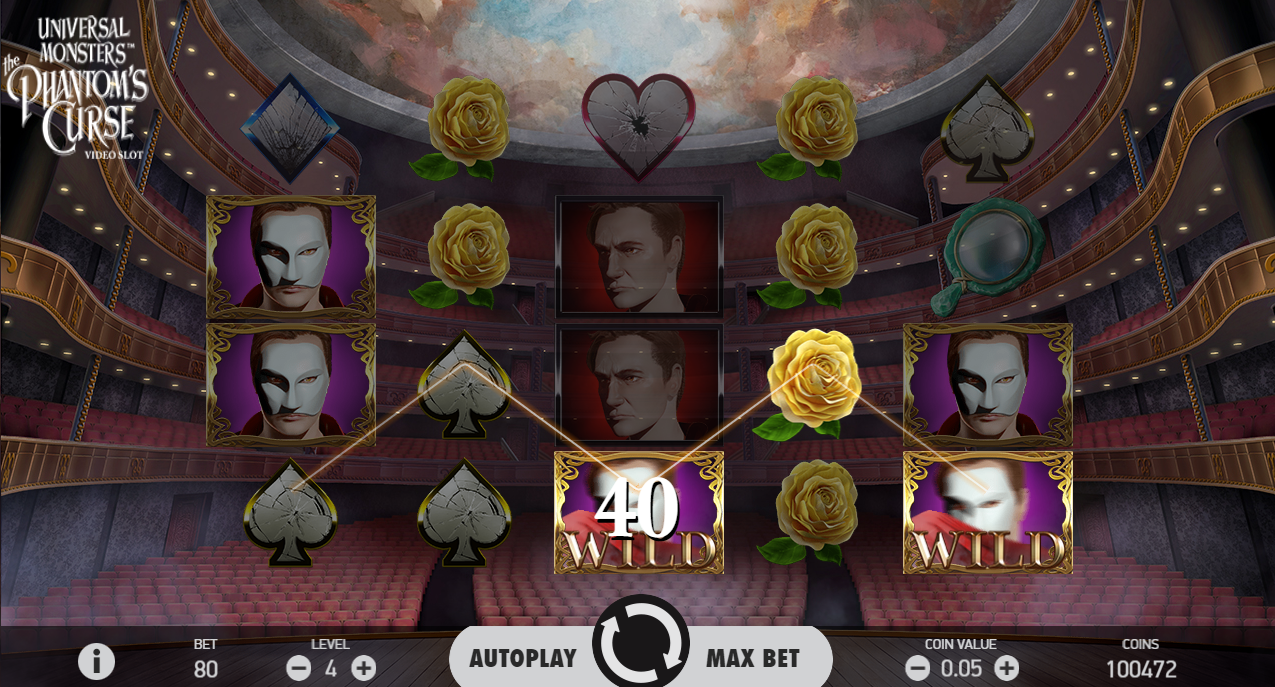 The symbols in The Phantoms Curse are split into low values and high values. The group of low-value symbols consists of the four card suits - spades, diamonds, clubs and hearts. They are designed as framed broken mirrors and award payouts for combinations of three, four and five matching symbols.

The group of high-value symbols includes six game-related picture symbols. They start with a dagger, followed by a mirror, a yellow rose and a gold ring. The highest-paying symbols in the game are Christine and the Phantom himself. All high-value symbols award payouts for combinations of three, four and five matching symbols on a payline.

The special symbols in the game include the Phantom’s mask as the Wild which substitutes for all except the scatter and bonus symbols. A golden chandelier is the game’s Scatter symbol which triggers the Free Spins round. Other symbols can act as a Wild, but more about this further down the text.

How to Play The Phantoms Curse Slot

Once you have selected your total bet, you can spin the reel set by pressing the spin button in the bottom centre of the screen. If you want to enjoy the gameplay without pressing spin after each round, then press AUTOPLAY. You can select the number of rounds from the available pre-set numbers and watch the reels spin for your selected bet.

How To Win The Phantoms Curse

Winning payouts in The Phantoms Curse slot are awarded for landing combinations of matching symbols on the 40 paylines. The four low-value symbols all award payouts of 5, 10 and 20 for three, four and five matching symbols. The low values start with the dagger and the mirror awarding 10, 20 and 40, followed by the yellow rose with 10, 25 and 50, and the gold ruby ring with 10, 25 and 60. Christine pays out 15, 30 and 100, while the unmasked phantom is the highest-paying symbol with 15, 50 and 200.

Landing three of the golden chandelier scatters anywhere on reels one, three and five triggers the Free Spins round. You will be awarded an unlimited number of free spins on a new reel set. Here, the reels are attached to a rope holding the chandelier. If the masked phantom appears on a reel, it gets highlighted and a rope is cut. When the Phantom cuts all the ropes, the round ends. The masked Phantom acts as a Wild during the round and it will become stacked on any of the highlighted reels.

This feature is triggered by landing stacked unmasked phantom on reel one and a stacked wild mask on reel five. All bonus symbols on the reels, phantoms and wilds, remain frozen on the reels for one re-spin and act as wilds.

The point and click bonus in The Phantoms Curse is triggered by landing the unmasked phantom stacked on reel one and Christine stacked on reel five. First, you need to click on eight roses to reveal con prizes until you find the blocker. When this happens, you’ll move to the second stage where you need to select from three mirrors to reveal a multiplier. The maximum multiplier is 3x the coin win, with a possibility for a maximum win of 7200 coins.

Our The Phantoms Curse Slot Review

Like all releases coming from NetEnt, The Phantom’s Curse is another excellent online video slot. It looks excellent and there’s plenty of action both in the main game and the bonus features.

So, claim your welcome offer from the casinos promoted here at Slotswise and spin the reels of The Phantoms Curse slot for the chance to win big!

Avalon II Quest For The Grails

Dungeons and Dragons Fortress of Fortunes