Ali Baba, the star of the famous folk tales is returning on the online slots scene. This time, the developer Red Tiger Gaming has decided to update its Ali Baba’s Luck slot with a Megaways version that gives you up to 15,625 ways to win. Here, players will get the chance to trigger free spins and turn winning symbols into golden ones, so you can land payouts of up to 20,336x the stake. This game is very similar to the original, but there are a few differences that make it stand out. Find out what is new in our in-depth Ali Baba’s Luck Megaways Slot Review. 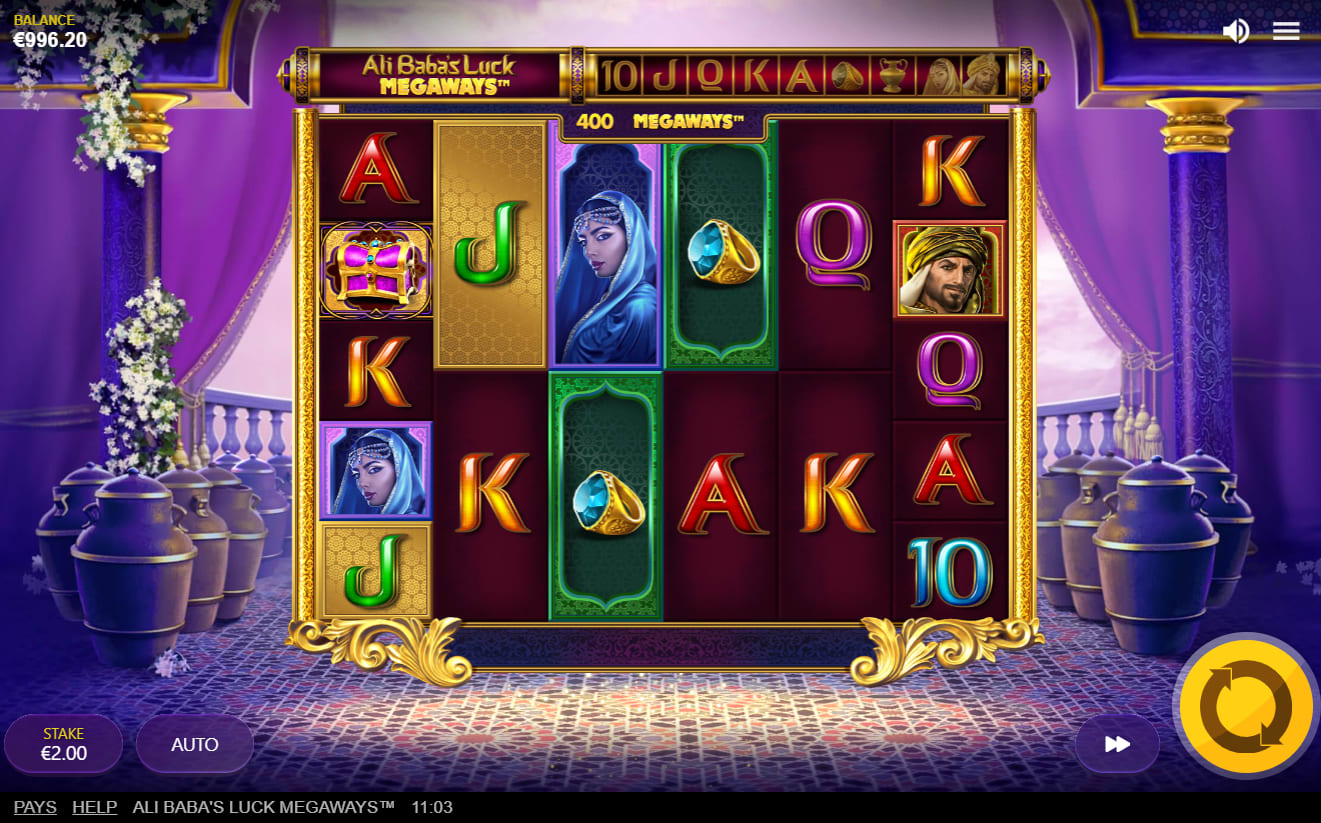 Red Tiger’s Ali Baba’s Luck slot has been given a Megaways version and it comes with up to 15,625 ways to win. All in all, it’s basically the same game with a number of additions. Features here include free spins and expanding symbols. You can land huge payouts and can take thousands of pounds from a single spin. All in all, it’s a Megaways game with high-quality design and graphics, and you’ll read more about its bonus features in our Ali Baba’s Luck Megaways Slot Review below.

The star from the folk tale added to the One Thousand and One Night collection is back for more slot adventures, this time with the Megaways game mechanic. The Ali Baba’s Luck Megaways slot by Red Tiger Gaming comes with six reels that can contain two to five symbols. The more symbols, the more Megaways. So, if all reels have the full number of symbols, you’ll play with 15,625 active paylines.

Ali Baba’s Luck Megaways provides Megaways fans with a new gaming experience while still appealing fans of the original game. This game has many of the elements included in the original game including expanding symbols after every winning spin. There’s also a bonus wheel which will determine how many free spins you’ll receive. Therefore, with free spins and expanding symbols, this game offers a pretty huge payout potential, so you can win impressive prizes of up to 20,336x your stake in a single spin.

To start your journey to the Arabian palace, you’ll need to place your bet per spin that can range between £0.20 and £40, which will hardly please the high rollers. To win, you need to land at least three of the low-paying symbols or two of the high-paying symbols on an active payline from the leftmost reel. There’s also an Autoplay feature that allows you to run 20, 50, or 100 auto spins.

When it comes to the design, Ali Baba’s Luck Megaways doesn’t really differ from the original game. So, if you’re familiar with the design of the Ali Baba’s Luck slot, you’ll be familiar with the design of its Megaways version too. The reel set is placed inside a beautiful palace with a gold and purple colour scheme. Of course, an Arabian soundtrack in the background is adding more to the action, especially when bonus features are triggered. All in all, it’s a nicely designed game with high-quality graphics.

In the Ali Baba’s Luck Megaways slot, the main focus is on the Megaways engine with its dynamic reels. At the start of every spin, the game will select a random number of two to five symbols that will land on each reel, leading to anything from 64 to 15,625 active paylines. You can see the number of paylines that are active during a spin above the reels. Besides the Megaways engine, you can also benefit from expanding symbols and free spins when playing the Ali Baba’s Luck Megaways slot.

The Expanding Symbols feature is a brand new feature in the Megaways slots. Instead of using cascading reels, which are often found in the Megaways slots, Red Tiger decided to put Expanding Symbols in this game. This feature becomes active every time you hit a winning combination on the reels. The symbols involved in the winning combination turn gold for the following spin. When golden symbols land, they will expand to cover all positions on the reel if they can form a win. Unlike standard symbols, gold symbols don’t need to be next to each other in order to create a winning line. You can see which symbols are expanding symbols in the meter above the reels.

During the Dream Spins bonus, when a symbol is converted to a golden symbol, it stays golden until the end of the bonus round. This will give you more expanding symbols to form winning combinations easily.

Red Tiger Gaming has optimised the Ali Baba’s Luck Megaways slot to perfectly work on all mobile devices. The design, layout, features, and everything from the game works seamlessly when playing on a mobile. The game is built with HTML5 which allows it to adjust on any smaller screen, whether it’s an Android, iOS or a Windows mobile device.

Red Tiger Gaming is a well-known developer that has proven to make high-class online slots. You’ve probably heard about the Gonzo’s Quest Megaways slot by Red Tiger that is one of the most popular slots in the world of online casinos. Or, if you’re a fan of the Luck of the Irish, you might have played the Leprechaun’s Magic slot that comes with a number of magical bonus features. Another popular Red Tiger Gaming slot is the Vault of Anubis slot which takes you to a journey in Ancient Egypt through a cluster pays game with seven reels.

Comparing to the original Ali Baba’s Luck slot, the Megaways version does its job well. There is a massive payout potential of up to 20,336x your stake, and the RTP is pretty average. Moreover, the Expanding Symbols feature is a great addition to the game which makes it stand out among the other Megaways slots. If you liked Red Tiger’s original Arabian adventure but now want to play something more interesting, the Ali Baba’s Luck Megaways slot is the right choice for you.

Discover the Ali Baba’s Luck Megaways slot by claiming a welcome offer right from this page and play at top-notch online casinos.

The Adventures of Ali Baba