Experience the famed Celtic Football Club on its slot game of 20 always-active paylines and five reels. The game has an RTP of 95.27% and an engaging reel action that includes a free spins bonus that includes the chance to score goal and get a kicker on your winnings. The top paying symbol brings 1000x and the starting bet is as little as 0.20 per spin. 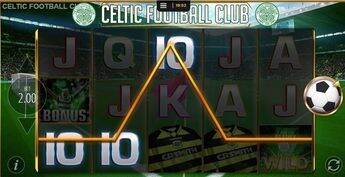 In this review, we will focus on a rather unusual slot game that is based on one of the oldest clubs in the world, based in Scotland. With a rich tradition of over 130 years, the club is still one of the most popular in the world, with plenty of fans and supporters from all over the world. So, stay tuned for our Celtic Football Club Slots and read all the thrilling details regarding this online slot game.

So, this online slot includes 5 reels and 20 active paylines, which means that there will be more than enough winning possibilities for you. Also, at this point, it is worth to mention that the wins can be massive, even up to £250,000(or x10,000 of your stake), which you would agree, is massive.

Celtic Football Club slots has some nice graphics that are focused on this glorious Scottish club, found way back in 1887. The symbols of the game includes low valued symbols including fans, players, jerseys, logos and a star of the year 1967. There are also royal symbols which are low valued, including 10, J, Q, K, and A.

The least amount that you can stake in the game is £0.20, while the maximum amounts to £200.00, which means that this online slot game is perfectly suitable for every type of player out there, no matter the budget.

The RTP of this game is also worth mentioning, especially because it is above average. So, the Celtic Football Club slots has a return-to-player percentage of 95.27%, which is slightly above average.

The developers, Blueprint Gaming in this case, have made this online slot game extremely straightforward. The first thing that you need to do is choose the desired casino where you want to play the game. After doing that, the next stop to you finally beginning the game is to set the desired coin denomination. This is done with the “Bet” option which is placed on the left side next to the reel set.

Once you are ready with that, you can start the game with the “Spin” button that is placed on the right side of the screen. It is practically a football, which resembles the theme of the game in a perfect sense.

The game includes the “Autoplay” option as well, which is a tool that helps you have more relaxed and enjoyable gameplay.

If you want to find out more about this online slot game, you can click on the “i” button on the lower left corner of the screen.

Celtic Football Club slots includes some nice bonus features which we will talk through in the following segment. There is a wild symbol that includes the logo of the club and the other one is the fan section in the stadium. These symbols will pay you a huge amount of up to x1,000 based on your stake.

Changing Room Bonus is a feature that is triggered if you manage to land bonus symbols appearing on the first, third and fifth reel. This will bring you some bonuses like free spins, mystery wins and a couple of bonus games.

Celtic Way is a bonus game that moves you on board while collecting coins multipliers or scoreboards.

The Trophy Room is another bonus game that is practically a simple picking feature.

Ultimately, we must admit that Celtic Football Club slots has some nice graphics with potentially huge payouts and high volatility. The RTP in the game is also nice which is why this online slot is not just for Celtic fans, but for general slot lovers as well.

Do you have what it takes to be a champion? Play Celtic Football Club slots and claim your welcome bonus to find out!