The game at hand comes with a layout of four rows and six reels, plus the additional row on the top. This is the layout of a megaways game that can spin on as many as 100,000+ ways to win. Players can land winning outcomes for three symbols and make bets that are as little as 10p per spin.The theoretical return to player (RTP) of Pirates Bounty Megaways is 96.12% and the variance is between medium and high. 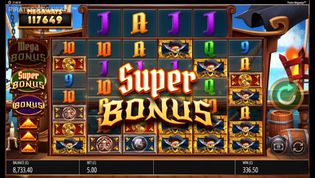 There's pirates aplenty in the world of online slots and the fun seems to never end thanks to game providers like Blueprint Gaming. The latest addition to the throve of slots that take place on a ship is called Pirates Bounty Megaways slot which is a 117,649 ways to win bonanza with three bonuses and potential payouts of up to 10,000x multiplied by your bet.

The cascading wins payout system that is part of the megaways mechanic is always exciting to experience, especially if it is being nudged into a frenzy. This certainly is possible when you play Pirates Bounty Megaways and the benefit is one of the three bonus features that come with free spins and potential instant prizes.

Although not a megaways slot, NetEnt's Rage of the Seas slot is quite exciting and comparable to this game, because of the ways to win system. But where Rage of the Seas beats Pirates Bounty is in the area of extra features. Both games can compare, but each one is its own thing.

The designers at Blueprint Gaming have gone for the usual set of symbols that can be encountered in pirate-themed lore. The high-paying picture symbols feature skulls and swords, octopuses, ships and sirens. The rest of the symbols are cards between nine and ace.

The players aren't going to find much animated detailing surrounding the symbols, however, the winning outcomes result in the combination becoming cropped out of the screen, surrounded in a fiery frame.

There are animated effects in the Pirates’ Bounty Megaways slots, especially when you cross from the base game into the bonus feature and when the multipliers are slamming down on the reel set. The visual effects of rays of sunshine and fire are pretty cool and there is also a musical theme that completely fits your reel adventure.

Players can start rolling with the pirates and hurl big black bombs on the reel set by pressing the Spin button, which is located on the right side of the screen. The reel adventure should, however, start with selecting a wager that is different from the casino's default, unless that amount works fine.

The above is possible by pressing the banknote in the bottom-left corner, which is to the left of the autoplay button. This action opens up a list of wagers which begin with 10p and end with a maximum of £100 per spin.

Pirates Bounty Megaways slot has the standard and expected paytable structure where the most lucrative symbol is the wild, which can pay 50x your bet. All other symbols pay significantly less for six of a kind.

Players who are looking for something new in regards to the extra features are not going to find much that is different. Except for the way in which you land the bonus feature. Instead of scatter/bonus symbols you need four, five or six or more win cascades.

This brings you to the Bonus WHere where you can spin for a chance to land free spins and a cash prize. The maximum regarding the latter is 40x and the most that you can win in terms of free spins is 20 - that's at the innermost reel.

Also, winning outcomes start a multiplier of 1x for each good successive spin and there is a mystery symbol that can transform multiple symbols at once into the same kind.

The game is available as a free play demo slot at online casinos that host Blueprint Gaming slots. This enables the player to test the game’s features, the variance level and the overall look and feel.

There isn’t much that is different about this game compared to other megaways slots, but it is quite alright to play and actually it can become quite fun thanks to the visual effects. The potential payout of 10,000x is reachable with the help of multiple free spins retriggering events and lots of win multipliers.

To discover Pirates Bounty Megaways slots choose one of the welcome offers, claim it and play at one of the best casinos on the internet.