Discover the amazing Safari Gold Megaways slot and play for a chance to win more than 10,000x. The game comes with six reels, up to seven rows and an additional row of four reels that can boost the chances for a win. Safari Gold Megaways has a bonus feature in which the players can win multipliers of up to 10x on the win. 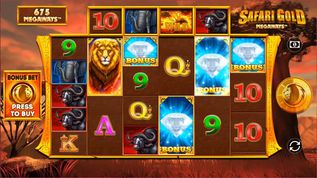 Play the Safari Gold Megaways slot for a chance to win up to 50,000x multiplied by the winning bet, plus free spins and multipliers of up to 10x.

By now Megaways slots have become a standard part of the online casino inventory and the titles just keep rolling in. This time, the latest from Blueprint Gaming to close off the summer with an exciting release, is the Safari Gold Megaways slot. The game comes in the standard package of the style - 117649 ways to pay, six reels and a shifting set of rows which can display as few as two symbols and as many as seven.

The theoretical maximum payout on this game is up to 500,000x and there are many cash prizes leading up to that amount which can come from standard symbol wins or with the help of the free spins bonus feature and the multipliers which are part of the wheel of fortune bonus. The game has a standard wild symbol which adds to the excitement of your gaming experience.

Here is one of those online slots that isn't quite shining brightly from all of the graphics design gems, yet still delivers a decent visual experience as part of the play. Safari Gold Megaways slot, as the name suggests, features a set of animals that belong to the African savanna. These are the high-paying symbols and they haven't been drawn particularly well.

The rest of the symbols are the high cards, starting from nine and ending with the ace, all of which, sadly, have been given close to zero effort in terms of their design. At any rate, it is the musical theme that can set the mood for the gameplay, and of course, the potential wins, on a game that comes with a good range of multipliers on the bonus wheel.

Unlike the reel set taken individually, the layout as a whole tells a different story. The background is part of the African savanna and all of the buttons are big and in plain view.

To send the reels spinning use the big round button to the right, which has the king of the jungle on the face. The autoplay button is below and clicking or tapping it will open up a row of options, where you can set a total loss limit or a single win limit.

The bet amount can be selected from the bank-note symbol which is above the spin button. In that regard, the smallest bet on the game is £0.20 per spin and the maximum has been set at £10.00 which has been the standard for many megaways releases and Safari Gold Megaways slots isn't the exception.

The players can access the paytable from the upper right corner of the screen. This is the area that keeps all the information about the symbol pays, the details to the bonus feature and how the payouts are calculated.

Some slots of this category offer a Bonus Bet and that is the case with Safari Gold Megaways slot. The players can buy a bonus bet and play at increased chances for a win.

The most valuable symbol is the lion and it pays 50x when six of the same land on the reels. The other symbols pay less when they fall in the same number. Generally, the picture symbols pay 2x for the least valuable one in three instances to 50x.

The game comes with a scatter, which is responsible for triggering the bonus free spins feature, and there is something called the Mystery Symbol. The latter can surprise you both during the base game as well as in the bonus spins. The mystery symbol reveals either one of the high-paying picture symbols.

As for the free spins, the scatter stopping in three places will take you to the bonus where. It is here where you can get anywhere between five and 30 free spins with an attached multiplied that can range from x1 to x10.

The Bonus Bet simply buys you the free spins bonus.

Here is one of the latest string of megaways slots that we can get excited about. Safari Gold offers all of the megaways excitement on an affordable range of bets. The bonus feature gets a special notice because of the multipliers. Landing anything more than x4 could mean winning outcomes that are quite decent.

Start your adventure on the Safari Gold Megaways slots when you claim a welcome offer to one of the UK online casinos on this page.