The game comes with four rows, five reels and 30 always-active paylines. Winning outcomes can form with three or more matching symbols and players can spin the reels with as little as 10p per go, The theoretical return to player of Hoard of Poseidon is 95,72% however the variance hasn’t been released yet, although it appears to be near the highest level. 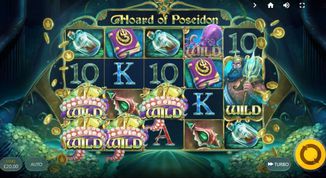 The slots masters at Red Tiger Gaming are stepping up their production with a wilds-heavy online slot that takes us under the sea and into Poseidon’s realm. The premise suggests a hide and seek game between the sea god and one of the deep seas’ most feared creature - the Kraken. And with a name for the game like Hoard of Poseidon slot, players can rest assured that the maximum payout can grow into a serious hoard.

The players can have a ball scuba diving in pursuit of the golden chest wild symbol, as this is one of the three wild symbols that are present on the paytable and on the reels. With so many wilds is there room for a free spins bonus? Not so much, as the payout system of Hoard of Poseidon can trigger respins with locked wilds as part of the extra features. The engaging bonuses can trigger events in succession towards the maximum payout potential of 3423x.

Red Tiger has made one of the games that may turn the players’ attention away from other slots. Besides the dynamic gameplay and the fun that comes with it, Hoard of Poseidon slots has been primed with a number of moving parts. The symbols themselves are quite engaging as they represent objects from the realm of Poseidon.

Players will find a book of godly secrets, a boat inside a bottle, a precious stone inside a  conch, a golden ring with a ruby and a set of royal cards. It is however the wild symbols that can put up a marvelous show on Hoard of Poseidon. Each wild symbol comes to life when it helps to form a winning outcome and when it interacts with its own kind and with the other wild symbols.

Overall, this is a great game to play. it has a mysterious edge to it and definitely keeps you guessing.

How to Play Hoard of Poseidon Slot

Setting up for the gameplay on this Red Tiger Gaming slot is quite easy, as the company retains its favorite layout for the controls and buttons. To start the reels spinning under the sea, press the big, yellow Spin button in the right bottom corner. This action deducts the active bet amount one time from the balance for each spin.

To know how much you are betting from the get-go, look in the bottom left corner and you will find the Stake button which shows the amount of the bet. Press that button to open up the list of available wagers. Hoard of Poseidon slot has a nice range which starts at 10p per spin and has a maximum of £20.00.

The four rows and five reels can spin on their own if the player wants to engage the game in its Autoplay mode. Pressing the Auto button opens up the menu where you can choose from the automatic spins presets and add a few additional settings that help control the spend. In order to go for a speedier game, press the thunderbolt icon in the bottom right.

How to Win Hoard of Poseidon Slots

There are four outcomes that can trigger with the wild symbols. The first possible outcome is called Poseidon's Plunder. All three wilds need to land on the same spin so that Posidon can cast his sea spirits on the reel-set, causing random chest wilds to appear. Meanwhile, the Kraken visits the reel set and causes the wilds to lock in place so that they stay there for the next spin.

Locked Wilds occur when the Kraken wild and the golden Wild chest land on the reel set on the same spin. In the event, Kraken slips its tentacles around the golden chests so that they stay there for the next spin.

Ink Wilds occur when Kraken and Poseidon frequent the waters on the same spin. Poseidon sends his sea spirits, Kraken runs away but leaves a trail of ink in its path which become the Ink Wilds throughout.

Yet another combination of wilds is possible with Poseidon and the golden chests. In the event when these land on the same spin, Poseidon sends his sea spirits to clone a number of chest wilds.

Multipliers can randomly appear on the winning outcome and cast their effect on the next spin also.

The game is available as a free play demo at online casinos that host Red Tiger slots. This enables players to try the features and gameplay with free credits, which, of course, result in non-cash winnings.

A marvelous game overall. Has a quite decent maximum payout potential that can result from a single spin and it can work up a sea storm with the wild symbols. A must try shall we say?

Discover the Hoard of Poseidon slot by claiming a welcome offer right from this page and play at top-rated online casinos.