Red Tiger are fresh with a new jackpot slot in 2019 called Jackpot Quest. The game has six vertical and six horizontal rows as well as 40 always active paylines. The game has a number of picture symbols of which the most valuable is worth 1000x. The Ruby Talisman is the game's bonus feature and it triggers respins and expanding high-valued symbols. The RTP is 96.06% 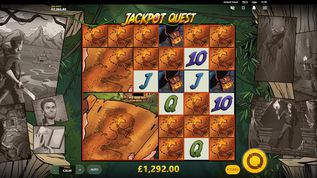 Play the Jackpot Quest slot for a chance to win the game’s big prizes. Play with small bets and hope for the Ruby Talisman bonus feature activating often.

Anyone who is ready to enter the jungle in pursuit of a jackpot prize that is hidden somewhere in it, will find recluse in the Jackpot Quest slot. This is after all, an adventure-themed slot game, that has a big prize for those who are lucky enough to chance upon it. Game takes place in a mountainous kingdom that opens up to valleys under canopy and serpentine rivers. That is the thrilling idea behind it.

How to Play Jackpot Quest Slot

The reel-set itself however is a combination of six horizontal and six vertical rows filled with the high cards symbols and picture symbols of the adventure. Play the game with as little as £0.20 per spin but there are multiple bets that follow small increments, of £0.20 that give way to the £1.00 bet from where the amounts become bigger by whole numbers. The middle-range bets include  £6.00 and £8.00 and £10.00 From there on, the £20.00 bet will lead to the Jackpot Quest slot maximum of £100.00.

To start all the reel action that has been embedded in this slot game, simply press the big yellow 'Spin' button found in the bottom right corner of the page. There is next to it another button labeled Turbo, which causes the reels to move and stop faster. Anyone who wants to kick back and let the adventurer in the game take the course of action through the jungle, and towards the potential jackpot prize, then use the 'Auto' button which stands for Autoplay.

That button lets the players select from a number of total spins. There are also few additional options that let the players set a loss or a win limit, or both. Also, the Stop on Bonus Feature button is there to stop the auto spins when the game hits the bonus feature, which is fun to watch. To stop the automatic turns use the same button to do that.

How to Win Jackpot Quest Slots

The game has 40 always active paylines and these spin as such without regard of the size of the bet. Their objective is to turn up the potential winning combinations based on three or more matching symbols, or one of the game's bonus features.

The most valuable symbol is the good old one-armed bandit symbol, which displays a winning outcome of triple sevens on its one payline. That golden symbol pays 1000x when six of the same land on a line. Next in line is the satchel symbol, paying 600x for a line of six, followed by the whip, paying 480x and the piece of the map, which pays 320.

The rest of the symbols are the royal cards, which pay significantly smaller amounts compared to the picture symbols, but these sustain the game and the balance nevertheless.

The winning outcomes can also occur when that one most special symbol called the Ruby Talisman causes some symbols to expand and cover four or more positions on the grid.

The role of the Ruby Talisman is to turn as many Golden Slot Super Symbols as possible. This is achieved at random, when the picture symbols are turned into that highly-prized symbol. When the talisman sends a beam towards the Satchel Super Symbol, a random number of picture symbols will also become the same. In the same manner, the whip can also become a super symbol. So we see the same logic in the Jackpot Quest slot.

The implements to the adventure become super-sized symbols and each tell a part of the story in a cartoon-like manner. In the process, the game can unleash multiple such outcomes that can result in the entire reel-set becoming covered with one of those super symbols. And that means big winnings when it happens.

This adventure slot has a return to player of 96.06%. For those who aren't aware of the meaning of this abbreviation, it translates to the percentage of the amount of money that could be returned over a period of play. So, over an indeterminate number of spins, the return will be £96.06 if we assume that £100 has been played on the same.

The game has been optimized for mobile and it is one of those grid-based games that does not do the cluster wins pay. This is a standard payline game and for this format it is a curiosity, and one which we approve of. The theme is cool and the big wins could reach some amazing heights thanks to the respins to which theoretically there could be no stop, as long as the talisman keeps activating.

Play for a chance to discover the treasure in the Jackpot Quest slot. Claim a welcome bonus to the casinos on this page and enjoy the game.