The present game is set inside an alchemist's lab which is equipped with heavy tomes of transmutation and magical incantations. The Alchemy Fortunes slot is set on a grid-based playing field that can produce cluster wins instead of classical payline wins. 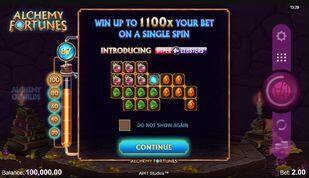 A game of crystals and magic potions has been conjured up by All41 Studios for release on Microgaming's platform.

Players who go for this game are going to find several gameplay features that can help boost the odds in your favor. First off, the Rolling Reels is part of the All41 Studio payout system called HyperClusters. Basically, these are cascading win events that can result in multiple payouts from the same spin.

If you play Alchemy Fortunes you will notice the Magic Potion Meter that can trigger five different reel modifiers, however, the game also has a free spins bonus.

In terms of design, the game isn't keen on creating a marvellous display of symbols and animation. This is simply because the grid of seven horizontal and seven vertical rows makes for smaller symbols, thus leaving out room for the graphic design to come through to you.

Nevertheless, if you play Alchemy Fortunes slot you will find this to be an exciting game that can engage in dynamic spin sequences. Five matching symbols are needed for a basic win. In that regard, the low-paying symbols of the game are four crystals that can pay between 0.25x and 25x for clusters between five and 30 or more symbols.

High-paying symbols are represented by four different vials of liquid, possibly the alchemist's prized connections. These symbols can pay between 0.8x and 500x for the same payout schedule across the board.

Most valuable symbol on Alchemy Fortunes slot is the vial with orange liquid. The game's wild symbol is represented by a blue orb. This symbol can substitute for any of the regular symbols.

Considering the theoretical return to player probability, All41 Studios has provided players with a value that is higher than the industry's average. An RTP of 96.41% basically states that a return of around that figure can be expected from the sum of wagers made on the game.

Some players may get lower than this number over an indeterminate number of spins and some may get more, as it all depends on the whim of the random number generator that determines all outcomes by sheer chance.

Alchemy Fortunes slot is a highly volatile game which means the winning outcomes will tend to be low and more numerous, which makes a very big win possible at a very low frequency of occurrence.

You can play Alchemy Fortunes for a chance to win cash prizes of up to 1100x your bet, which represents the game's maximum that can be paid from a single spin.

Gameplay and Features on Alchemy Fortunes

The feature we'd like to start with involves the wild symbol. In addition to substituting for all standard symbols, the wild can be randomly added in multiple positions on the reel set on a non-winning spin. What is more, the free spins bonus can add five wilds at the start of every spin. So we'll continue from there.

The meter on the left keeps track of the number of winning symbol from a sequence of HyperClusters. If the game can include 100 or more symbols as part of the winning outcomes of subsequent hyperspins, the player gets five free spins. These can retrigger if another 100 symbols are reached on the meter.

is rewarded for 20 symbols. This is basically a symbol replacement modifier that picks a random bottle and casts it across all other potion symbols on the grid. In the free spins, the replacement symbol is the highest-paying bottle.

is rewarded for 40 symbols. In the base game this adds between three and six wilds in random positions. In free spins five wilds are guaranteed.

is rewarded for 60 symbols. In the event, all gem symbols are removed and replaced by random gem and bottle symbols.

is rewarded for 80 symbols. In the event of a wild symbol landing on the reels, multiple positions are marked wild and are converted in that symbol.

The game can load on mobile without any issue as long as you are playing on a iOS or Android phone that isn't severely dated. Considering the layout, Alchemy Fortunes slot plays in landscape mode automatically, which enables a full view of the grid-based playing field.

Is there a Jackpot on Alchemy Fortunes

All41 Studios has packed the game with a 1100x win potential however this amount can't trigger as an instant prize. The machine has to work through multiple payout iterations to reach that sum, and those need to involve high-paying symbols wins that are additionally given a boost by the game's reel modifiers.

Other All41 Studios Slots

All41 has released a few games that we consider engaging and fun to play. Shamrock Holmes Megaways is one of these as well as the All Win FC slot, which is a football-themed game that launched in time for the Euro cup which was postponed for 2021.

As far as we can remember, the Alchemy Fortunes slot is the first game by this studio that comes with a cluster payouts system, here called HyperClusters. The reel modifiers can be gotten by landing wins that include 20 or more symbols and that is quite possible without having to endure long winless droughts.

Discover the Alchemy Fortunes slots by claiming a welcome offer right from this page and play at top rated online casinos.