Tiki Reward is a new online slot that comes with four instant prizes that include a jackpot of 1000x. The layout of the game is three rows and five reels that spin across 50 paylines. Those who play Tiki Reward will be met by a high-volatility mathematical model and a theoretical return to player (RTP) of 96.32%. The smallest bet is 20p per spin and winning outcomes are made for three or more matching symbols. 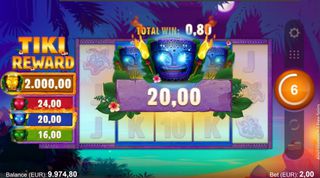 It looks like tiki masks are in-vogue in the world of online slots. Several game providers have taken up the theme that takes the player on a reel adventure to some paradise island in the Pacific ocean.

One of the most famous games is Aloha! Cluster Pays slot but there are also games like Tiki Treasures Megaways, Tiki Vikings and others that are notable and quite exciting to play.

The game at hand is simply called Tiki Reward slot. It was made by the slots experts at All41 Studios who have furnished it with a maximum pay potential of 1000x.

All41 Studios is a relatively new company with about a dozen releases thus far in 2020, however, their games are released on Microgaming's platform. Tiki Reward is one of their more-engaging games because the gameplay has been made to be more engaging than usual, thanks to the 50 paylines, and there is the standard set of features like a wild and a scatter symbol. But there is more, as the game can trigger win multipliers.

Design-wise, All41 Studios has followed the tiki theme to the T. The masks are the bonus symbols that can accumulate to add to the jackpot prizes during the free spins bonus. When there is a winning outcome with any one of these symbols, they perform a little tiki dance that puts you in the mood for a Hawaiian vacation. The high-paying symbols are shapes of various animals that can be found in the Pacific expanse, plus a flower.

The remaining symbols of the Tiki Reward slot are the royal cards. The graphic design is a major reason why this game is fun to play. Perhaps the game isn't overly exceptional, but there is enough movement on the screen to make for dynamic gameplay. There is also the musical theme which adds to the tiki bar on a beach type of a setting.

How to Play Tiki Reward Slot

Players can start spinning the reels of the game by pressing the Spin button which can be found on the famous "hand watch" part of the screen where All41 Studios keeps all of the settings and gameplay buttons.

On top of the Spin button, players are going to find the buttons for the paytable and for the settings, represented by nine dots and a cog, respectively. The first button shows all of the symbol payouts and the second button enables you to change some settings, such as the speed of the spins.

Tiki Reward slot has autoplay mode. That button can be seen just below the Spin button. Pressing it opens up a board that has a number of presets for the number of automatic spins. Selecting either one enables you to play Tiki Reward hands-free and simply enjoy the show.

Below that button is a stack of coins, which opens up the bet setting. In that regard, the game has a range of bets that start at 20p per spin and end at £100.00.

How to Win Tiki Reward Slots

This is an interesting game to play for a layout of three rows and five reels. Players can land standard winning outcomes in the base game, however, the bonus feature comes with improved odds because the tiki masks can lead to bigger prizes. Since there are 50 paylines, Tiki Reward slot makes landing multiple winning outcomes from a single spin quite possible.

The Tiki Reward RTP is 96.32% and the winning outcomes for the five high-paying symbols range between 0.10x and 2.5x multiplied by the bet. It is obvious that these figures aren't overly exciting, but we have to take into account the 50 paylines and the fact that this is a game with four instant jackpots, of which, really, only the top two count for much.

The tiki masks are wild symbols that can land on the reels with a 2x win multiplier. These symbols can only land on the three reels in the middle section of the playing field. There is a golden tiki mask that can substitute even for the blue, green and red tiki masks.

You need three scatter symbols to trigger the free spins bonus where the tikis can award the corresponding jackpot prize. You need three on the reels to win either one. The golden mask rewards the biggest of the four jackpots, which is prized at 1000x.

Players can explore the game as a free play demo slot at online casinos that host games by All41 Studios and/or Microgaming. Demo slots enable player to try the gameplay and features of the available slots, which may help some players make a decision as to whether to play that particular game as a real money slot.

Maybe the graphic design isn’t the most fulfilling compared to some other games, most notably Aluha! Cluster Wins, but the game is engaging nevertheless. Overall, it’s worth trying it because the wilds come aplenty and the high variance makes it possible for the occurrence of big wins.

Discover the Tiki Reward slots by claiming a welcome offer right from this page and play at top rated online casinos.