Play the retro Lock a Luck slot for a chance to win high paying symbol prizes thanks to the locked reels feature. The game offers two locked reels as a random event, with a chance for these to expand to five reels, in which the wins are guaranteed. The locked reels spin the same symbols, so the line wins are in-sync. 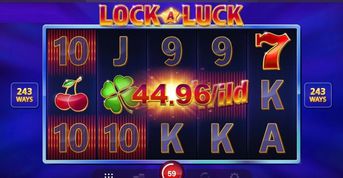 We are on the cusp of a retro slots revolution and Lock a Luck slot may be one that stands the test of time.

All41 Studios are not an overly famous developer studio, but they do make slots for Microgaming, and that is deserving of our attention. The studio has several online slots under their belt and the latest one is Lock a Luck slot. This is a fully classical, retro slock involving the symbols that you'd find on one of those old slots machines.

The players will find a reel set of three rows and five reels that spin across Microgaming's iconic 243 ways to pay. That means, the symbol pays are for three or more of the same symbols falling on consecutive lines. Even though it is a classic slot, the game has been developed quite marvelously and carries a dynamic gameplay.

Along your adventure on the reels, you can unlock achievements which accrue towards potential big wins. The name-giving feature is a reel modifier that can locks the reels and make them spin in sync with one another. An absence of a free spins feature is supplemented with a wild symbol, so there is enough going on that can bring you towards the maximum payout of close to 80,000.

A blue background sets the stage for a low-key graphics layout that is the home of the Lock a Luck slots. Even though it seems simple, the game packs a dynamic reel action. The symbols get a gloss-over of lights and shades on each winning outcome.

There is a low key sound theme that punctuates the wins and the paired reels whenever they occur. The choice of symbols, like we said, reflects the simple days of mechanical slots machines, yet, the design team at All41 Studios have done an excellent job in making it all look modern and enjoyable.

How to Play Lock a Luck Slot

To start playing the game you need to choose one of the amounts from the range of bets that are available in the coin stacks icon. When you click this button a list will open that contains the smallest bet of £0.20 and the biggest bet of £60.00 per spin.

There are many other bet amounts that are available, and once you have made your choice, you can push the big red round Spin button. Another way to play is by choosing the autoplay option. This lets you select from the automatic spins presets and set the optional stops that help you mind your balance.

Another button that you can note is the paytable. It is accessible by the menu button which is to the left of the coin stacks.

How to Win Lock a Luck Slots

The wins in Lock a Luck are made with three or more matching symbols that need to fall on consecutive reels. This is where the locked reels align the same symbols, thus increasing the chances for a big or a bigger win.

The high-paying symbols are the fruits, the diamonds, sevens, horseshoes and the clover. The most valuable symbol of the slot is the diamond, which pays  50x multiplied by the bet. The second symbol in terms of value is the seven, paying 20x.

The high cards start with the nine and end with the ace. These are the low paying symbols, paying between 1x and 1.5x when five of the same fall in a row.

The defining feature of the game are the locked reels. These can trigger at random on any spin to the effect of two adjacent reels are locked and the same symbols are displayed.

There is a supercharged occurrence of this feature in the Lock a Luck slot where up to five reels can lock and deliver the same symbols, in which case the resulting win packs a significant prize relative to the bet.

The Wild symbol is represented by that word in glossy, 3D text. This symbol substitutes for any other, but it also appears on reels two, three and four only.

Considering that All41 Studios is yet to establish themselves by producing subsequent successful slots, it is expected that they will release their games as demo versions. Some casinos may even hold a demo of the Lock a Luck slots, so there is a way to play the game for free before playing for real money.

In a spate of retro and classical slots this is one that has to fight with some amazing releases. In our honest opinion, the graphics design shouldn’t be the decisive factor in that regard. The features of Lock a Luck aren’t many but that one chance event can turn your bet into a small wealth, if you manage to get all five reels locked with the good symbols lined up. Another game with the same feature and of the same style is Sync Reels slot, and it isn't the only one, so players can take their.

Discover Lock a Luck slots by claiming a welcome offer to any of the online casinos on this page.