64 ways to pay on a funnel-shaped reel-set that can turn up expanding wilds, scatter-bonus symbols and wins of up to six symbols. The biggest symbol pay is 15x on the winning bet and there can be more than one resulting from a single spin. Rome: Caesar's Glory slot can trigger up to 16 spins. 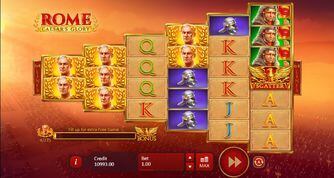 Legionnaires, commanders, swords and shields, and of course, Caesar, the man who took Rome to the next level. These are the symbols which comprise the premise of a new slot game by Playone. Unlike most of their previous releases, this one brings excitement on a type of reel-set that can be seldom seen in slots machines, and with it comes the challenge to embark on a reel adventure.

Rome: Caesar's Glory slot starts with a reel of two rows and gradually moves onto six reels where each subsequent one offers an additional row. Thus the sixth and last row has seven rows with symbols. These spin across a total of 64 paylines. The reels can come with full symbol stacks and payouts are made with three or more matching symbols, when they fall from the leftmost reel on adjacent rows.

The game has a wild symbol that can expand fully on the reels and there is a free spins bonus that flips the reel-set and thus increases the chances for more than one win to become initiated from the leftmost reel. Payouts can be decent, but only for the high paying symbols occurring in five or more stops on the paylines, so where do the big wins lie? We shall find out ahead.

The slots experts at Playson haven't departed from their familiar style on this game. We are used to seeing artwork that follows along similar style and pattern, but this isn't to say that Playson are repetitive.

Rome: Caesar's Glory slots has original artwork and offers a number of actions that result in the reel-set springing to life. The symbols are still, however few of these can cause the game to flame up, such as in the event of the expanding wild canvassing an entire reel.

An additional attribute is a cinematic musical score which creates a dramatic atmosphere that adds to the excitement of the theme.

How to Play Rome: Ceasar’s Glory

The game starts on all 64 paylines with the push of the spin button, which sends the reels spinning once, taking the active Bet amount once per spin.

The players can also use the autoplay option by selecting the button to the right of Spin. Once you have clicked or pressed on that button a menu opens up with the number presets for the automatic spins.

Rome: Ceasar's Glory slot has an advanced menu that allows the players to toggle on a Loss Limit option or add Single Win Limit amount to stop the automatic spins.

Bets can be selected from the BET button underneath the reel-set. The smallest bet is £0.20 and the biggest spin is £100.00. An impulsive jolt may cause some players to hit the MAX button.

Then there is the 'i' button which opens up the paytable for a view of the payouts, bonus feature details and few other pieces of information that may come useful.

Like we suggested at the start, the payouts are made with three or more matching symbols, however these must begin on the leftmost reel, which consists of two rows.

Obviously, the three-row second reel most have one symbol that matches on the first reel and another same symbol on the third reel for a win to occur.

A wild stopping on the first reel immediately increases the chances for any other symbol on the subsequent reel to open up to chances for a win. The same counts for wilds on the second reel.

The most lucrative symbol in Rome: Caesar's Glory slot is the wild, represented by Caesar. Six of the same pays 15x on the winning bet. The commander of the legion opays 15x for six of the same, and only 0.25x on the bet for three. The wolfskin wearing general pays 10x for six and only 0.20x for three.

A free spins feature is triggered when three or more of the Roman eagle symbol fall anywhere on the reel-set. Three of these symbols trigger 8 free spins, four trigger 12 and five trigger 16.

Regardless of the number of triggering symbols, the reel-set funnel will flip its orientation so that the sixth reel with seven rows is placed on the left.

This immediately increases the chances for wins, because now we have seven symbols that can connect with two or more additional symbols to form a win.

Furthermore, the wild symbol expands during the free spins bonus.

The free play mode which is available at casinos that host demo slots in practice mode, allows the player to get familiar with the gameplay and make a decision whether to play based on that.

The funnel reel-set is definitely not the most usual out there, but it does offer specialties of its own. Since we need three or more symbols for a win, key in this game are the wilds, especially the ability for the wild to expand on a reel. A meter keeps track of all the times a wild has occurred on a reel and when it is filled the game grants a bonus.

Rome: Rise Of An Empire