Playson has taken one of its most popular online slots and given it its Megaways version. Combining an Ancient Egyptian slot with the Megaways engine, Playson is giving us the Legend of Cleopatra Megaways slot. This is a six-reel slot where the number of ways to win can go up to 200,704. When playing this exciting game, you can take advantage of collapsing symbols, scarab multiplier and a free spins round where you can win up to 6,584x your stake. Carry on reading our Legend of Cleopatra Megaways Review to discover all its features in more detail. 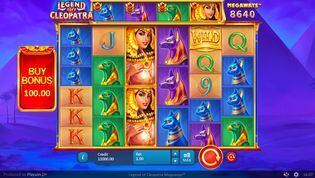 About Legend of Cleopatra Megaways Slot

Enter the world of Cleopatra, the famous ruler of Ancient Egypt, and spin the reels of this new online slot from Playson. The Legend of Cleopatra Megaways is a new version of the original slot that was released two years ago. This time, the developer has changed a couple of features and added the well-known Megaways mechanic. For those who don’t know, Megaways is a slot mechanic which allows the game to have thousands of ways to win whose number change with every spin. In this case, the Legend of Cleopatra Megaways can have from 324 to 200,704 ways to win.

This online slot plays on six reels and can have two to seven rows. It’s the first game from Playson featuring the Megaways mechanic. As its title suggests, this is an Ancient Egyptian-themed slot where the main character is Cleopatra. With every spin, the number of symbols of each row will change and this will give you a particular number of ways to win (Megaways). You can see your current number of Megaways at the bar above the reels.

To spin the reels of the Legend of Cleopatra Megaways slot, you will need to place your bet per spin first which can range from £0.20 to £100. Both Autoplay and Turbo Spin mode are available. To create a winning combination, you need to land at least three matching symbols on an active payline, starting from the leftmost reel. With over 200,000 paylines and bonus features to play with, you can win up to 6,584x your stake from a single spin, which is great. The bonus features here include Collapsing Symbols, Scarab Multiplier and a Free Spins feature.

As its title suggests, the Legend of Cleopatra Megaways slot is built around the famous Egyptian queen Cleopatra. Playson did a great job in terms of the design of this game, and you will find a beautiful game with high-quality graphics. The reel set is placed in a desert and you can notice pyramids and palm trees around them. The colour palette features gold, blue, and purple shades which are pleasing to the eye so you’ll receive a top-notch gaming experience. The soundtrack is also Egyptian and perfectly fits the gameplay.

The paytable here is composed of both low- and high-paying symbols. The lower ones are the standard Royals (9, 10, J, Q, K, A) designed in different colours. On the other hand, the high-paying symbols are Horus, Anubis, Basted, and of course Cleopatra, which is the top-paying symbol and pays up to 40x the stake if you land six in combination. There is also a gold wild symbol with the name ‘WILD’ on it which appears on reels 2, 3, 4, and 5 and substitutes for all regular symbols.

RTP, Variance and Payouts for Legend of Cleopatra Megaways Slot

The Legend of Cleopatra Megaways slot has an RTP of 95.84% which is slightly below average, as the average RTP for online slots is considered to be 96%. The RTP (Return to Player) displays the theoretical payout that a slot will pay back to the players over time. The hit frequency is 30.46% which means that you will land winning lines on third of the spins on average. This makes the Legend of Cleopatra Megaways slot a high variance game so you can expect to land less frequent, but bigger winnings. The maximum win that you can take out from this game is 6,584x your stake on a single spin if you manage to trigger the Free Spins feature, For players who like high variance gameplay, this game should appeal.

Gameplay and Features on Legend of Cleopatra Megaways Slot

The first and main feature that determines the gameplay of this online slot is the Megaways mechanic. With a game mechanic that can give you up to 200,704 ways to win, there are thousands of opportunities to create winning combinations, especially when you trigger some of the bonus features. In the Legend of Cleopatra Megaways slot, three bonus features are included - Collapsing Symbols, Scarab Multiplier, and a Free Spins feature. Let’s take a look at each of them.

The Collapsing Symbols feature, also known as Cascading Reels feature, has been featured in many Megaways slots, so you might have heard of it. Every time you land a winning combination, the Collapsing Symbols feature is triggered. It will remove the winning symbols from the reels and will put new ones in their places. The new symbols will give you new opportunities for more winning combinations on the same spin. The feature goes on as long as you keep winning.

The horizontal top reel above the main reel set has the word “BONUS” in the background, and it’s known as the Top Bonus Row. Each symbol that slides there can come with up to three mini scarabs attached. When the top reel symbols are part of a winning combination, the Scarab Multiplier feature is triggered. Each scarab that is included in the win will increase the multiplier by 1x. At the end of the Collapsing Symbols feature, the multiplier resets.

Playson has optimised the Legend of Cleopatra Megaways slot to work on all mobile devices without issues. The design, layout, bonus features and everything that is part of the game works seamlessly when playing on a smaller screen. This game is developed with HTML5 so it’s mobile-friendly and can adjust to any small screen, whether it’s an Android, iOS or a Windows device.

Playson is a popular slot developer that is known for its high-class Ancient Egyptian slots. One of its latest releases is the Solar King slot, which is also an Egyptian-themed game that comes with multipliers, wild symbols and free spins. Another popular Playson slot is the Diamond Wins slot that has the Hold and Win feature where you can win a Mini, Major or a Grand Jackpot. Another popular slot from Playson that has a fruit theme and the Hold and Win jackpots is the Sunny Fruits: Hold and Win slot with a top payout of 1000x multiplied by the winning bet amount.

Playson’s first game that has the Megaways mechanic is excellent. The Legend of Cleopatra Megaways is a nice update from its original version and offers many features that can give you huge prizes. In addition, it’s a well-designed game with quality graphics that can be played on any desktop and mobile device. So, if you enjoy playing Ancient Egyptian slots with Megaways mechanic, you should give this game a try.

Discover the Legend of Cleopatra Megaways slot by claiming a welcome offer right from this page and play at top-notch online casinos.