Fly away turned into a marvelous raven, to a Celtic adventure filled with magic and reels of stacked symbols. Raven's Eye is a slot game that ought to sit well with anyone who knows how to appreciate nature and the mysticism surrounding its unstill spirit.

The Raven's Eye top payout prize is 176,000x coins multiplied by the line bet, and the bets range from 0.10 per spin to all the way to 100.00. There is a total of 30 paylines that spin across five reels and four rows, and an above average Raven's Eye RTP of 96.10%. The mobile version lets Android and iPhone users get on the reels from any casino that can launch on these devices. 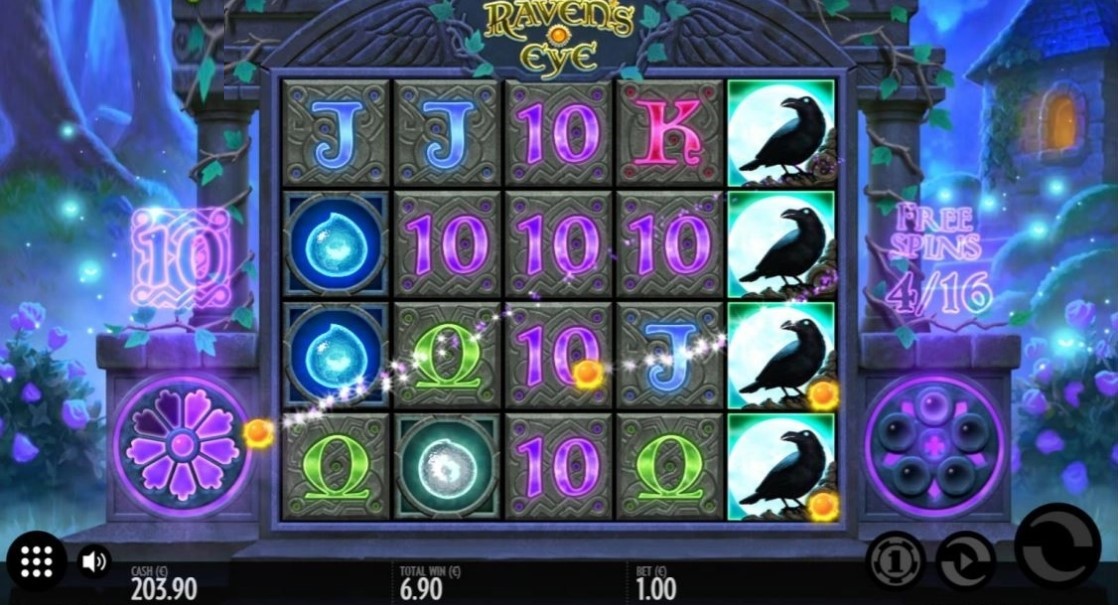 This is a slot game by Thunderkick who had instilled it with five reels and four rows that become filled with orbs and glowing royal cards symbols. There are two rosettas flanking the sides of the reel-set, and each one has a circle of petals that can get glowing under the duration of a spell, which is conjured up from the winning combinations.

The last becomes the case especially during the Raven's Eye free spins bonus feature. The raven across the moon is one of the game's most valuable symbols, and it is related to its triggering of bonus rounds. This symbol can come as stacked and cover many of the squares on the grid. Read the full review on SlotsWise and claim a welcome bonus to one of the casinos on this page.

Slots inspired by the Wild West seem to be all the rage in the first half of 2019, with multiple studios releasing titles of this theme. One of the highlight releases for May is the Gold Canyon slot, coming from Betsoft. We have a splendid Wild West action slot on five reels, three rows and bets that start as low as 0.10 per spin, and go through small and big increments.

Besides the collection of on-theme symbols, such as horses, sheriff's stars, nuggets of gold and bandits, Gold Canyon slot has a wild and a scatter symbol. The latter is a wrap of dynamite sticks that can bring 20 free spins, and many more on the subsequent retriggers.

The horseshoe symbols are collected as bonus symbols which can in turn increase the chances for a bigger, better win. Play the Gold Canyon slot on your computer or mobile device, as both iPhone and Android are supported as the game has been optimized to fit either. Coming soon is a full review of Gold Canyon, so brace yourselves for the welcome bonuses that will be available right from this page.

Rich Wilde and the Tome of Madness

Rich Wilde has become a household name in the world of online slots. This is the third installment after the now famous Book of Dead and Rich Wilde and the Aztecs. Rich Wilde and the Tome of Madness has a mysterious air to it. What is this tome, what kind of magic does it contain and how much is its top payout? 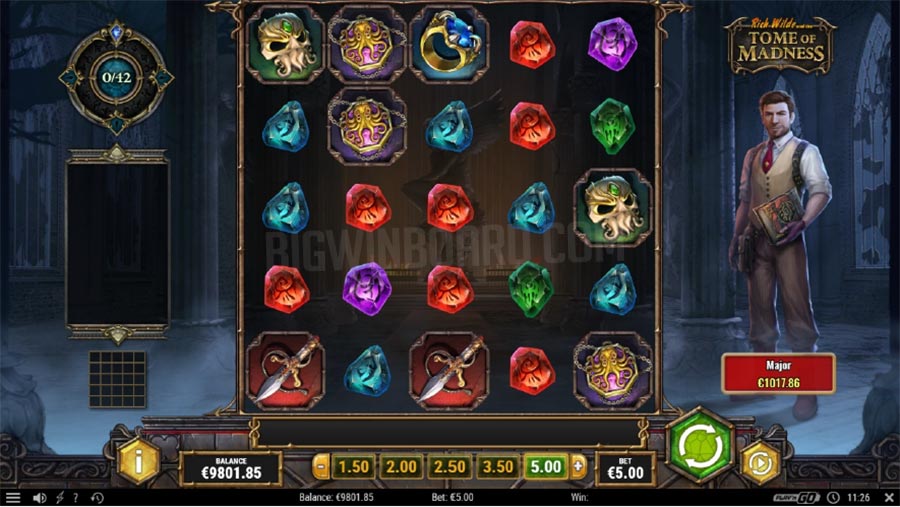 Well, we have in fact a five reel game with a wide betting range (between 0.10 and 100) and a top symbol payout of 2000x on the line bet. That doesn't mean this is the only chance for a jackpot, as the same prize could be won more than one time. Meanwhile, the Rich Wild and the Tome of Madness has an RTP of above-average 96.59%.

The game goes into the unknown, following the same concept in the previous games, and the long-lost civilizations provide the perfect setting. Tome of Madness slot has gems for symbols, which are in place of the royal cards. The high-paying symbols are a number of artifacts and similar such objects that can pay sums that are multiplied by 100x.

This is a cluster wins game, meaning, the winning combinations are paid as the result of a number of matching symbols falling around each other, or on consecutive reels. One of the game's most valuable symbols is the wild, called Necronomicon, and it adds a 2x multiplier to the winnings. Another wild is a Cthulhu-like creature is an expanded wild that comes in during the Tome of Madness free spins game.

As it was expected all along, the latest Rich Wilde slot has reel modifiers which occur because of the portal to the right of the reel-set, which instigates three effective eventsL Special Wilds, Abyss and Void. As it is expected, again, this edition may displace the Rich Wilde Book of Dead slot from its piedestal, so do try the latest Play N Go game and one of the potential most famous slots.

Playtech are always quick to release slots game that are a mix of sci-fi and real-world bits and pieces. Their previous release in this fashion was the spy-themed Spy Rise slot, and now we have something resembling a space pirate story, with pirate androids and humans with electronics planted on their bodies. This is the Starmada Exiles slot. We can't be sure how well of a reception this slot is going to receive from the slots players, but we do recognize some potential. 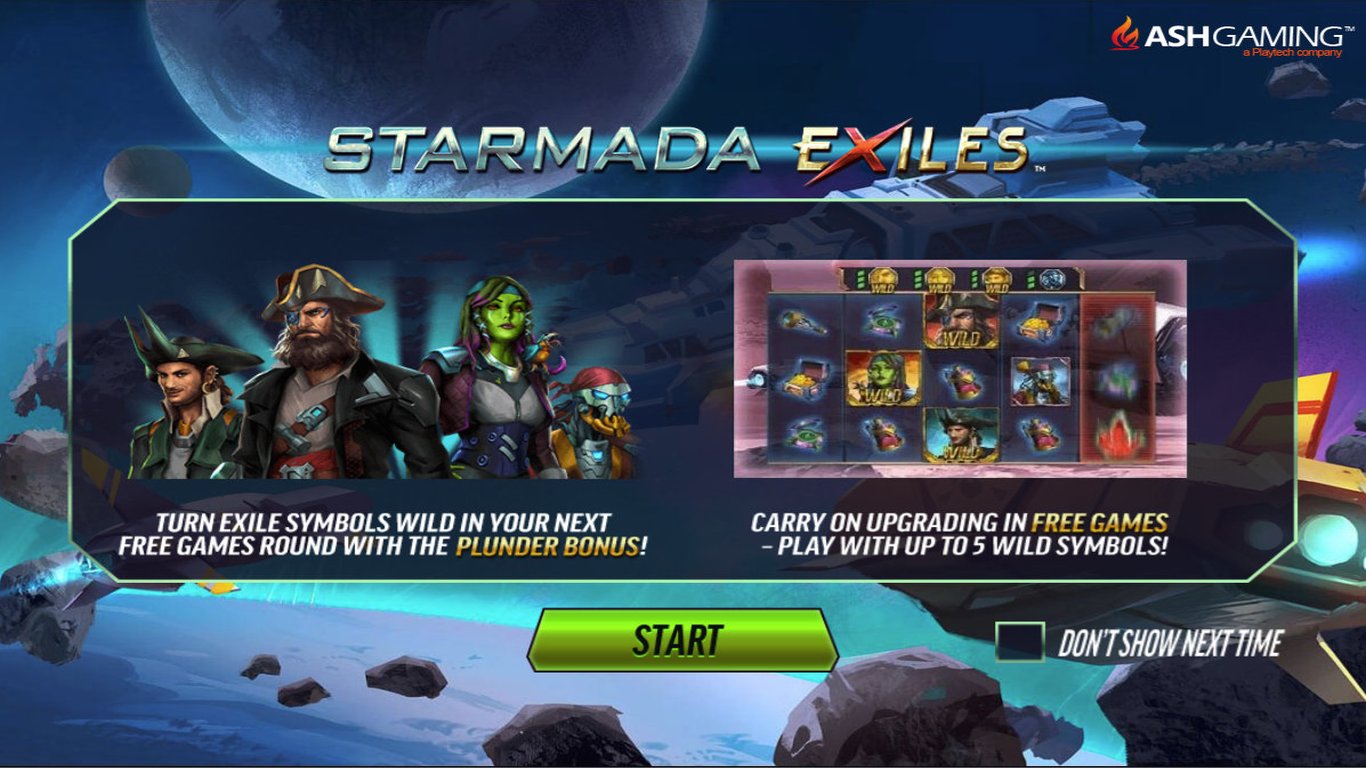 Starmada Exiles is a standard reel-set of five reels and three rows. There are 25 always-active paylines that spin for prizes that are quite lucrative: 1500x on the line bet for the game's top paying pirate, and 1000x and 700x rewards for five matching symbols on the subsequently-valued symbols. Any of these symbols, called Exiles, can turn to a Wild, and substitute for any except scatters. Land three or more of the planet scattered symbol to get 10 free spins, which are ready for the retrigger for an additional round of 10.

As for the betting opportunities, there is a wide range that start with the low of £0.25 per spin. These go through a number of increments before turning to round sums like £1 and then going up through quarter pound increments up to £2 and so on. The Starmada Exiles slot maximum wager is an unbelievable £2500. We can't be sure why Playtech would include such an amount because their slots have a cap of £500, usually, so this question begs some answers. Is the game's top payout able to spit out some hefty sums that can be put back into the game for a chance for an even bigger payout? This we'll leave up to the high-stakes slots experts out there.

Meanwhile, try the Starmada Exiles slots on a welcome bonus that can be claimed right from this page.

Discover the sound of a top possible payout of 900.000x on the line bet on the Mariachi 5 slot by Reel Time Gaming. This title has five reels, three rows and a consecutive reel type of play, with 243 ways to pay. The variance is medium but leans towards high per a large number of bets, and then swings back to medium, seems like. The players are welcome to make small bets that are way below £1.00 but these could go up as high £150, for those who like to engage in high stakes action.

Real Time Gaming have impressed players left and right with their amazing slot games such as Lucha Libre, Trigger Happy and Fire Dragon. One of the highlight releases for 2019 is The Mariachi 5. It looks like Mexico-inspired themes are a thing for this company because, besides Jumping Beans, now we have another epic game involving a bunch of mariachi and a big-win potential.

The Mariachi 5 slot has been optimized for mobile, as all games by this studio are. So as long as the casino of your choice can launch on mobile device, and this game is on it, you will be able to rock the reels and sing a tune or few with the bony mariachi.

The free spins bonus feature comes with wild symbols that slap a multiplier on all winnings. The players can land x2, x3, x4 and x5 on the winning line and even retrigger the free spins by lading additional scatter symbols. The biggest symbol pay is 6000x on the bet and other hefty symbol payouts. So let's go and celebrate the Mexican Day of the Dead with The Mariachi 5 slot.