Celestial King slot is a game with an ancient Asian theme. While fans of Marvel comics may have encountered the term in a different context, here the title refers to a mythical/fantasy king who rules the far east. Bally Gaming’s designers obviously got pretty creative here and we have to admit that they delivered a game with some quite exciting features. 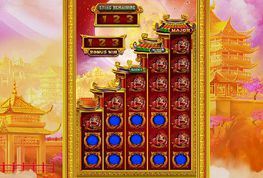 Celestial King slot is a game with an ancient Asian theme. While fans of Marvel comics may have encountered the term in a different context, here the title refers to a mythical/fantasy king who rules the Far East. Bally Gaming’s designers obviously got pretty creative here and we have to admit that they delivered a game with some quite exciting features.
Bally is a division of Scientific Games and they have been very active in the last few years, releasing a number of highly popular games, including Celestial King. The four jackpot prizes that can be won by any player who plays the game are one of the strongest selling points of Celestial Kings slots.
The game features quite a unique design in that the reels take up a very small proportion of the screen. Some players may not be used to that, but it is definitely refreshing and new. Otherwise the game is quite simple and straightforward.

Once you load the game you will notice the young Celestial king just above the reels. The reels are placed centrally, in the bottom part of the screen. You will notice traditional Asian buildings on both sides of the reels and the buttons are below and to the right of the reels. As we’ve mentioned, the reels are quite small, so it’ll take some time to adjust to the tiny symbols.
The music completely matches the overall visual theme, and there is a very distinct far Asian feel about it. The colours are vivid, and you’ll notice that the king himself often comes to life, especially after winning combination has been formed. The game is available across a range of devices, so you can play it both on a desktop computer or a laptop, as well as on your smartphone or tablet.
The game has five reels and 30 paylines. If Celestial King slot sounds like your king of a game, you’re at the right place, many of the casino sites featured on SlotsWise offer this amazing game, so just choose one, claim the special welcome bonus and start playing.

How To Play Celestial King

The main controls that you need to play this game are to the right of the reels. You’ll notice the large play button and the ‘+’ and ‘-‘ buttons which you can use to adjust your wager. The bet is set in total, not per payline. The minimum amount that you’ll have to stake per spin is 50p, but you can increase your stake up to a maximum of £80. Even though you choose the total amount the wager is still divided. For instance, if you wager £1 per spin, the bet is divided into 2p per line and 40p feature bet.
You will notice how the Celestial King slot jackpots listed above the reels raise as you increase your bet. Below the game screen there is a bar which feature few smaller buttons and where certain relevant game info is displayed and here you’ll notice the settings button. If you click on it, you’ll be able to toggle the sound and all sound effects off. Maybe you just want to play the game in silence, or perhaps you prefer to choose the music yourself when you’re playing.

How To Win Celestial King Slot

At least three symbols have to be aligned across a payline for a win, but the combination must start at the leftmost, otherwise there would be no payout. Celestial King slots standard symbols can be divided into two categories – low value and high value symbols, but there are also special symbols – a wild and a scatter.
Standard card symbols – Q, J, K and A are the symbols of lower value and with a stake of £1, you can win 10p for three Queens or three Jacks, 20p for a combination of three Kings or three Aces. Understandably, with more symbols per payline you can win higher prizes.
Coin, lotus, medal, pig and priestess are the symbols of higher value and five priestesses across a payline generate a win that’s three times your total bet, so in the case when you wager £20, this prize would be £60.
The wild symbol doesn’t only play the role of a substitute for other symbols, it also pays more than the priestess, provided that the winning combination is consisted only of wilds. The wild cannot replace the bonus, the scatter, nor the jackpot wild symbol.

There are few bonus features that can be triggered in Celestial King slots.

The grand jackpot, which is the highest prize in the game is triggered when you have five jackpot wild symbols across a payline. You should be wagering £4 or more if you wish to be eligible to win the jackpot. If you are wagering more than £4 the jackpot amount will be increased.

The mini, the minor and the major jackpots can be won even if you’re playing with less than £4 per spin. The jackpots amounts are displayed above the reels and these amounts will not change if your stake doesn’t exceed £4.

In addition to free spins, there’s also a re-spin bonus. In order to activate this feature, you will need at least five scatters, or more. When you get at least five scatters during a spin you will get to play three re-spins. The reels are transformed for this feature, high reels appear and during this bonus only scatters and symbols of higher value appear. Scatters are also valuable and can generate a win up to 50 times your original stake.

Ancient China is not an uncommon slots theme, but Celestial King slot is in many ways unique and original. The game RTP is 96.00% and that’s quite favourable. All in all, this is a pretty neat game with a massive jackpot prize, so if you want to test your luck, register on one of our featured casinos, claim a welcome bonus and start playing right away!