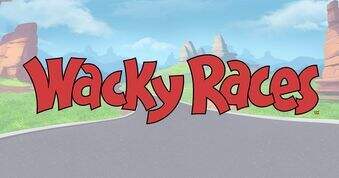 Play the Wacky Races slot on 40 paylines, with lots of bonus features and for a chance to win the top prize of 250,000 coins.

The imaginary world of ridiculous vehicles and the cast of character that tunes and races these is known as Wacky Races. It was a Hanna-Barbera series for television  that became part of the toddler curriculum since 1968 and went on for 20 years. Now we all of the absurd action from the television screen distilled into the Wacky Races slot, produced by the slots experts at Scientific Gaming and Ballys. This slot game has been optimized for mobile play and for the land casino floor, but it is natural that slots players can play it on their personal computer or tablet.

The slot creates an engaging gameplay with multiple bonus features and a reel-set that is outside the standard three by five. Here we have four rows and five reels spinning across 40 always-active paylines that can deliver the theoretical maximum of 250,000 coins on the line bet. Considering the multiple Wacky Races bonus features, there are multiple ways to arrive at potential winnings, which can be part of a very wide range, so even if the top payout seems far-fetched, there are so many potential prizes in-between that can be enjoyed by the players.

It looks like we have a Wacky Races slot that isn’t so wacky after all: the potential winnings are excellent, the gameplay too, and there is a range of bets that are welcoming to just about any player out there.

How to Play Wacky Races Slot

The playing surface of the slot seems like an entire controls board of one of the Wacky Races racing cars. The forty fixed paylines means that the only setting that needs to be configured is the  Bet/Line, which is located in the bottom right corner. This is where the bet is set per the payline, so whatever amount is selected it will be extrapolated across all 40 lines. The starting line bet is one penny, and that produces a bet per spin of £0.50, while the highest bet is obtained through wagering £1.00 per line, which would amount to £40.00, however the game grants a £10.00 bonus per spin with the highest bet, so the final price is £50.00 per spin.

There are few other buttons that have their part in the gameplay. There is the paytable, which in the Wacky Races slots is dynamic and reflects how the winnings raise in size as you change the size of the bet. Browsing the pages of the paytable will lead you to more information about the game's bonus features, the mystery stacked reels feature, the random wild feature and so on. The paytable can be accessed from the button that is just above the Wacky Races better bonuses button.

Then there is that button below the Paytable, which enables the slot game to work with at higher possibility of triggering a bonus feature, but at a more expensive bet.

All of the symbols are on-theme, having been taken from the tv show. There are the symbols of the various vehicles such as the creepy coupe, Muttley’s wacky scrap car, the professor's car and so on. Penelope Pitstop's symbol is also up there. As for the symbols of lower value there are the high cards starting at jack and ending with the ace.

The action on the reels becomes animated whenever there is a winning combination, and the screen above the reels shows an animated sequences whenever there a triggering event, such as when Dick Dastardly rolls a boulder to the edge of a cliff and pushes it down, during the stacked wilds event.

How to Win Wacky Races Slots

As for the adventure of arriving at the eventual big payout, there is more than one way that could possibly lead to that. The game's most valuable symbols are the Dick Dastardly wild and the Muttley and Dick scatter symbols. With the highest bet, both pay 500, multiplied by the line bet. There are other symbols that come with decent pays, but nothing gets close to the potential pays of the these two symbols - except for the bonus features.

The Wacky Races slots can trigger mystery stacked reels at random, so the players shouldn't be surprised to see a full reel of symbols that can go to interact with the other symbols and potentially make a winning combo. Then the Random Wild feature can result in an event where up to 11 symbols are converted into the wild.

The racing bonus is an animated bit where all of the cars enter a race, potentially triggering prizes or the Creepy Coupe free spins, in which 10 turns are awarded. The Random Wild feature can be activated during the free spins and there is the Gruesome Twosome wild which can substitute for all symbols and act as a scatter, which can retrigger the free spins for an additional 10 turns.

If anyone is ready to enter the Wacky Races slot race, the adventure can start right here by claiming a welcome bonus and exploring the game at one of the casinos on this page.

Deal or no Deal Megaways: The Golden Box