88 Fortunes Megaways slot is a remake of the jackpot game 88 Fortunes. The slots experts behind this release are Bally and they've done a solid rendition that brings all the excitement of a megaways slot. The players will discover the 117649 paylines on six reels and shifting rows, with an additional row that displays four symbols. Play for a chance to win up to 10,000x on the winning bet. 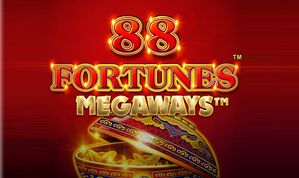 Play for a chance to score consecutive wins, free spins, multipliers and a prize of up to 10,000x on the 88 Fortunes Megaways slots.

In continuation of the trend in reshuffling popular or classic online slots in the Megaways engine the slots experts at Ballys have made the 88 Fortunes Megaways slot. The game gets a makeover, this time on the six reels that have become standard for megaways slots, and the shifting rows that start with four.

88 Megaways slot comes with an additional row, like the one found on the Bonanza slot, which displays four symbols that change with each spin. Furthermore, to the right of the reel set is an additional reel that displays the size of the prize that can be made during the bonus or jackpot play.

The symbol wins are made from left to right on consecutive reels, with the possibility of making wins even with two or more symbols on the same reel. As long as the first reel contains the matching symbol that is found in continuation on the subsequent reels, a payout shall be made.

This edition of the 88 Fortunes slot comes with 117,649 ways to win, but starts with fewer, as these expand with the symbol and the subsequent wins.

It shouldn't surprise anyone that Ballys had retained the spectrum of colors, ahem, the full pallette of reds and golds from the original 88 Fortunes. This implies that everything is on-theme and that everything stays the same, except the paylines and the jackpot tiers.

88 Fortunes Megaways slots sports the same symbols - traditional Chinese objects of luck, fortune and prosperity and the array of high cards, ranging from nine to the ace. There is a musical theme that copies anything that has to do with Imperial China or the tradition thereof, so don't be surprised by the familiar sound.

Overall, however, the experience is a bit different from the prequel to the megaways version. We get a full-blown gaming experience with the exciting consecutive win cascade.

How to Play 88 Fortunes Megaways Slot

Just like in the original game, this version is dominated by the number eight. No wonder the bets range between £0.08 and £88.00 per spin. This number is traditionally related to fortune so superstitious players are given an auspicious talisman to hold on to.

The bet can be selected from the Total Bet window which is located to the right of the Spin button, in the lower right area of the screen. To the left of the spin button is autoplay, which lets you choose from the number presets of automatic spins and lets you set a single win limit or a total loss limit.

To view the symbol pays of the 88 Fortunes Megaways slots, bonus feature details and other relevant gameplay information, you can select the question mark button and that will take you to the paytable.

How to Win 88 Fortunes Megaways Slots

The winning outcomes are made of three or more symbol wins laid on consecutive reels. With each win the game wil disappear those symbols and their place will be filled by a new set. Ensuing consecutive wins can go on until indefinitely, all from that singe triggering bet.

One of the gameplay features is to choose how many gold symbols ought to be present in the gameplay, between one and five. The cost of the spin rises with each gold symbol invited in the 88 Fortunes Megaways slot.

When you play with the smallest bet, playing with five gold symbols costs an additional 0.88 per spin.

There is a free spins feature but there is also a pick me game, which is the case with the original slot. The objective of the pick me game is to reveal the child symbol from behind the fu bat gold coins.

The 88 Fortunes Megaways free spins bonus is triggered with four, five or six of the scatter gong symbols, if these land on subsequent reels.

The game can be taken for a test-ride at a number of online casinos that offer demo games. The caveat is, the demo games can be played by registered players only, and in very few casinos by general visitors. But, with such small bets taken on the 88 Fortunes Megaways slot, you can play the slot game with real money and make the actual winnings, while simply trying the game out.

The are many reasons why this game received a megaways makeover. It’s the popularity, the pay potential and the four jackpot tiers. Sadly, only one jackpot prize is left in this version and it pays the theoretical maximum of 10,000x from a single spin.

Claim a welcome offer to play 88 Fortunes Megaways slots at the online casinos on this page.