Monopoly Bring The House Down Slot

A Standard Monopoly Game transformed into an Online video slot game by Backrest.

A Standard Monopoly Game transformed into an Online video slot game by Backrest.

For all the board game lovers, in addition to all the games which include those symbols, we have another one to add to the list – it’s called Monopoly Bring the House Down and it is developed by Barcrest. This game focuses on symbols available in the monopoly, a host that is the typical monopoly figure – an old person with white hair and bread, in a suit and black tall hat, which helps you reveal the prizes of the game. It has a blue background with the monopoly land based game’s picture on it, while the reels are spinning on a blackboard, with all the options that the game offers below it. It can use a little bit of colouring on the reels as the black reel background is not the colour of choice for many people, but that’s not what you will be here for, and we are sure you will love the prizes that this game has to offer. With a return to player rate of up to 98,10% so far (considering this is a relatively new game developed in 2017) it satisfies the needs of every player so far. Let’s take a look at its gameplay and how you can win some of the lucrative prizes.

Monopoly Bring the House Down is five reels 40 paylines online video slot game that can be played with a denomination from £0.20 all the way up to £500.00 which is a vast interval of bet per ship value that you can play, and it’s perfect for all kinds of players – for the ones that are here to chill and spin reels with a possibility to earn some small cash, or totally on the other end of the stick, the players with adrenaline rush and a desire to win the most valuable prize of the game. This is possible through the “Max Bet” option that can be found beneath the reels, right next to the “Auto Spin” option. This is for the ones that have the desire to play but are lazy to click the Spin button each time. Set the number of spins as well as the coin value, and let the game fill up your stake. The number of paylines and coin value, as well as bet per spin, can be adjusted with the “+/-“ buttons. Let’s take a look at the symbols of this game.

There are two types of symbols in Monopoly Bring the House Down, and they are divided into high and low valued symbols. The lower valued ones, as expected, are the deck of cards inspired symbols starting from the 10, through the Jack, Queen and King all the way to the Ace. The higher valued symbols are a boat, a car, a cat and a dog, all in a form of the original monopoly metal piece figures.

There is no standard wild symbol in between the standard symbols, but you can find a zone that travels behind the reels, and if the one or more pieces of the zone land on the reels, the symbols will turn into Wilds. These wilds activate a bonus feature that we will talk in a bit. On the other hand, there is also a Monopoly symbol which looks like a big M over a red background, which triggers another bonus feature. Let’s take a look at these bonus features.

Hot Zone – The zone that turns symbols into wilds is called a Hot Zone and it counts as a bonus feature in this game. 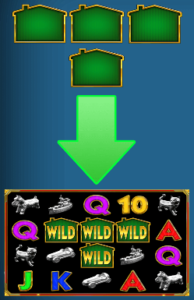 Big Bet –Just like in the monopoly game, you can buy five linked spins for an extra cash:

You can pick these cards that will award you the following features:

Free Spins –Three Scatter symbols anywhere on reel one, three and five will award you eight free spins. It’s not possible to retrigger this feature. Every House and Hotel which will land during these free spins will stay locked in place, increasing your chance of whopping prizes.

Chance Card –Once in a while you will have the opportunity to choose from three Chance Cards which will give you hot Zone pattern on the reels.

Selector Feature –A random, Hot Zone will be added to the reels and you have three seconds to accept. If you accept the zone will award wilds if not, a new one will appear. There is an option not to award a new zone, which in this case the last one will be placed on the reels

Bonus Drop –If a hot zone doesn’t appear on the reels for a long time, this Bonus Drop will place one to give you a little bit of refreshment.