Plenty Dragons slot comes with four rows and five reels that spin on a maximum of 50 paylines. Since these are not fixed, the players can choose to play on fewer, as they lower by increments of ten. The fewest number of lines is 10 and that impacts the bet amounts as well, with a minimum bet of just 10p per spin. 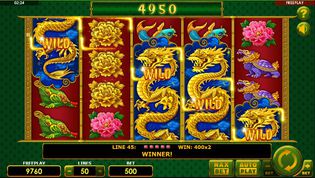 When there are plenty of dragons we are sure they are guarding plenty of gold, at least in Chinese mythology. The game that we are reviewing comes in Amatic's recognizable style and has a set of gameplay features that make it a land-casino game that's also available at online casinos.

The game's most notable feature is the expanded wild symbol, which is represented by a dragon. Being fierce as it is, this symbol also adds a multiplier of 2x on all winning outcomes that emerge with it. The other highlight is a heavy-paying scatter symbol and overall, a great base game.

The game design is very much alike any Amatic game we've played thus far. The graphic design style is recognizable from afar. Make no mistake, this isn't to say anything negative about that. Perhaps the symbols appear kind of dated in the way they appear, but on the screen of the gaming cabinet at land casinos, these are marvelous games.

Plenty Dragons slots offers a very simple set of visual effects. The wins are marked by a ball of fire spinning around the symbols that are involved in the win outcome. Some of the symbols flash and turn, while the dragon does put up some dance moves and changes colors. At any rate, the symbols are all drawings of animals that are revered in China, and there aren't any card symbols on the paytable.

How to Play Plenty Dragons Slot

Setting up for the game requires selecting the number of paylines. How it works is very simple. The more paylines are active in the game the greater the chance is for not missing any winning outcome.

Playing the fewest number of paylines (ten) is a way to get cheap bets on the game, however, the winning outcomes may be limited in number also compared to 50 paylines.

To select the bet amount use the minus and plus buttons in the bottom right corner of the screen. The bet amounts are expressed in credits and each credit is translated into the currency where the casino resides. In the case of pounds in place of the credits, a bet of 100 equals 10p.

Bets of 500 amount to 50p per spin, which is the smallest bet on all 50 paylines. The players are welcome to use the buttons to arrive at a bet they prefer to play with on the Plenty Dragons slot.

The spin button is the only round big button on the screen. The question mark opens up the paytable and the AutoPlay button starts the game in the automatic spins mode.

How to Win Plenty Dragons Slots

Winning at the game requires at least three matching symbols on a payline. The win outcomes must occur starting on the leftmost reel. The dragon wild substitutes for any of the symbols, except for the pearl, which is scattered.

In terms of value, the most rewarding symbol on the paytable of Plenty Dragons slot is that of the phoenix. As far as the regular symbols are concerned, this symbol pays the most, at 4x multiplied by the bet for four matching symbols.

These are not some overly exciting values, simply because all focus on the game goes to the dragon and scatter symbols.

The game doesn't have any respins or free spins, so we take what we have, for those who decide to play this online slot.

Other than this, three, four and five dragons on a payline pay the following amounts 1x, 5x and 20x multiplied by the bet.

The pearl symbol is scattered, which means it can occur anywhere on the reels. The ultimate prize is 25,000 credits which is 25x multiplied by the bet for five matching symbols.

Amatic have released this game as a free play demo, enabling online players to check it out with free credits before deciding whether to play with real money or not.

There isn’t anything special about the game, except perhaps the 50 paylines with a 50p bet. The maximum payout is moderate by any means, but the double with the dragon may bump any regular wins to double the pay amount.

Discover the Plenty Dragons slots by claiming a welcome offer right from this page and play at top rated online casinos.