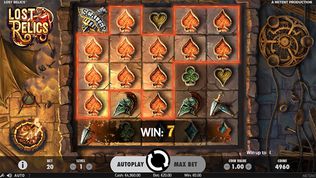 Searching for hidden treasures is quite a common online slot theme and that’s hardly surprising, because, if you think about it you’ll realise that playing slots online is a lot like a quest for a hidden treasure. There are a lot of people searching for hidden treasures and the larger the treasure, the more people are looking for it and while the odds are small for an individual to find the treasure, someone will eventually manage to find it. Lost Relics slots are the latest edition to the long list of slot games with a similar theme.

Indiana Jones is by far the most popular treasure hunter, and even though he is a fictional character, he is probably a lot more famous than most of his actual ‘colleagues’ and that’s hardly surprising considering that he was portrayed by Harrison Ford. Lost Relics slot features vivid Indiana Jones imagery and you will certainly enjoy this game, especially if you fancy watching Indiana Jones films and reading Indiana Jones comics.

You may think that when there are a lot of games with a similar theme it is difficult for a newly released game to get among the top ranked games, but you have to remember that Lost Relics slot is a game delivered byNetEnt, and that fact alone speaks volumes of the game’s quality, as NetEnt has created some of the most refined and most playable slot games, not just in the last few years, but in general.

Lost Relics slot features advanced and distinctive graphics, and the game is particularly optimised for mobile play, so you will be able to play it on your smartphone or tablet. That doesn’t mean that Lost Relics isn’t available on desktop computers and laptops though, you’d be able to play it across a range of devices and operating systems.

The sounds are very clear and have a very high level of quality and they are in complete accordance with the theme, you’ll almost feel like you’re in a dark cave, looking for valuable lost treasures worth millions.

NetEnt generally tends to make all their new games resemble each other, so that players won’t be confused and will be able to get into the gameplay immediately and that is the case with Lost Relics slot as well. The control panel is very intuitive and straightforward, as it is the case with all games by this provider.

How To Play Lost Relics Slots

This game has five reels and five rows, which is a somewhat unusual grid, as most NetEnt games feature five reels and three rows. The game is played with a minimum of 20 coins and there are no standard paylines as Lost Relics utilises the Cluster Pays engine. The cluster pays engine is one of latest inventions by NetEnt, where each cluster of symbols that appear on the reels generates a payout.

Since a cluster is needed, it doesn’t matter whether the symbols are linked from the leftmost towards the rightmost reel, vice-versa, or the cluster is located somewhere in the middle, anyhow there will be a payout.

You will have a chance to adjust the stake per spin starting from a minimum of 20p per game, up to a maximum amount of £400. As you can see, the Lost Relics slot offers a wide degree of flexibility when it comes to stake rates, so you will be able to play about with the wagers, decrease and increase the amount as you please. Always try to keep your wager in accordance with your bankroll, and don’t wager more than what you can afford to lose.

How To Win Lost Relics Slot

We already mentioned the cluster pays feature, and we will add that you’ll need a minimum of six symbols, in a cluster, linked horizontally or vertically to get a win. There are many different symbols in Lost Relics slots, starting from card suits – hearts, clubs spades and diamonds, up to objects that are linked to the theme like helmets, snakes, bracelets and daggers. Even the cards are designed in an Ancient fashion and don’t look like modern card symbols.

There is a difference in terms of how much a particular symbol pays. The card symbols pay less than the theme symbols, and if we compare different theme symbols against each other we’ll see that some of them pay more than others. The bracelet and the snake are most valuable two symbols and they can pay up to 1,000 times your stake. However, for such a payout you will need 25 symbols across the reels, in a cluster. While that doesn’t happen too often, it’s still good to know that you might win such a high jackpot.

As it often is the case with NetEnt slots, Lost Relics features quite a few bonus games. In fact, there are five different Lost Relics bonus features. There are three separate bonuses that are triggered randomly.

-          Added scatter – You are given an extra scatter symbol on a winning spin, and up to a maximum of three scatters can be awarded.

-          Added wilds – Similarly to the feature above, you can get three additional wilds, on positions that aren’t originally part of the winning cluster. Up to five instances of this feature can be awarded, which means you could get up to 15 different wilds.

-          Added coins – You could win between three and 30 times your stake randomly and up to five instances of this feature can be added, which means that the maximum win is 150 times the total wager.

The free spins in Lost Relics slots are activated when three scatters appear during the same spin, on the first, the third and the fifth reel. You will get ten free spins and remember that the Added scatter bonus can be very helpful when it comes to activating the free spins bonus.

The hidden chest is a feature within the free spins game. You can see the chest behind the reels and getting winning combinations can award you hidden chests. There are three different sizes of chests, including a small, a normal and a big chest. They can award various prizes including additional free spins, but also cash prizes and more.

Lost Relics slot is another one of NetEnt’s great Cluster Pays games, where there are no standard winning combinations, but you receive a payment for each cluster of at least six symbols that are linked either horizontally or vertically.

The game has both randomly triggered bonuses as well a standard free spins bonus feature which hides a lot of surprising and winning opportunities. If you’re a fan of Indiana Jones, look no further, and choose one of the online casinos featured on SlotsWise where you can play NetEnt’s latest Lost Relics slot.