Are you ready for an adventure through the age of stones? Precious stones, that is? Here is a Random Logic slot that puts you in the role of a stone age miner, looking for symbol payouts of 5000x and 1000x on the winning payline bet. Jack's Pot has a decent theoretical RTP and a free spins bonus, as well as a fun-loving gameplay. 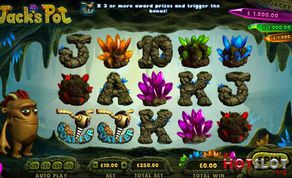 Are you ready for the adventure of your life, for one of the most innovative and exciting online slots that take you on a journey full of bonus features and amazing rewards? If your answer is yes, then we’ve got the perfect slot for you coming from the studios of Random Logic. Try Jack’s Pot slots at some of our casino partners on the right-hand side and claim some of the best welcome bonuses on the market. It might not be Millionaire Genie, but it is definitely worth the try. Want to find out a bit more before playing? Keep on reading!

Jack’s Pot is a five-reels, 25 paylines online video slot that comes with a Crystal Rock bonus game and three progressive Crystal jackpots. With limits for the bet per spin ranging between £0.25-£12.50, you’re in for the chance to win the game’s highest payout of 5,000x your line bet. The slot is a great addition to the gems theme in online slots where you spin the reels in the search of some valuable gems that will bring you high wins.

As soon as you launch the slot, you’ll notice that the graphics and animations on Jack’s Pot slots are of outstanding quality. The five reels are transparent, and the symbols look as if they are hovering in the air. The action in the game takes place in an underground cavern with the control panel positioned at the bottom of the screen. While the game logo is displayed in the top left corner of the screen. Undoubtedly the most interesting corner of the screen is the top right because it holds the three available jackpots placed within three ems in different colours.

Placed underground, you’re playing along with a creature with funny looks and a pot full of surprises. He will keep you company while you’re spinning the reels which are decked of theme-related low-value and high-value symbols.

The low-value symbols in Jack’s Pot are 10, J, Q, K and A, while the high-value symbols are coloured gems that stick out of rocks, so you have purple, orange, blue, green and red gems.

The special symbols in Jack’s Pot slots include a barrel full of gems in different colours which substitutes for all other symbols, except the scatter symbol, which is a rock drill used to trigger the main feature in the game.

How To Play Jack’s Pot Slot

Operating this online slots is quite easy and straightforward because all game buttons are positioned at the bottom of the screen and marked well. The only variable that you need to set before spinning the green Spin button in the bottom right corner of the screen is your bet. By pressing the plus button of the BET box you can increase your bet and if you want to decrease it, just press the minus button.

If you just want to enjoy the gameplay without pressing spin after each round, go for the autoplay option below reel one. Here, you can select from four numbers of rounds to be played automatically for your current bet, so make sure you select your bet before pressing one of the four options for the autoplay. 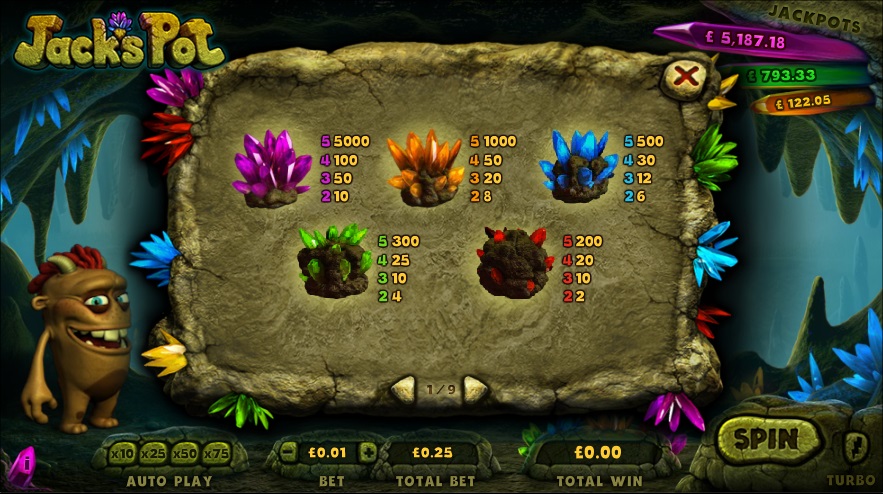 How To Win Jack’s Pot Slots

As with most online slots, winning payouts in Jack’s Pot are dependent on the number of symbols you land on the reels and their payouts. However, the most interesting thing about the slot is that you could win all three progressive jackpots!

As for the three progressive jackpots, you can see them growing as you play and you could win them only from the Crystal Jackpots bonus feature in Jack’s Pot.

Triggered by landing at least three of the drill scatters anywhere on the reels, the first thing you need to do is pick one of the six rocks displayed on the screen. You can get anywhere between eight to ten free spins, plus two or three amber wilds. The amber sticky wilds are added to the reels on each of the free spins to help you create combos and get bigger wins. During the feature, there are no scatter symbols, so the bonus feature cannot be retriggered.

Jack’s Pot slots feature is also triggered at random after any spin. However, it seems that higher bets increase the chance of this happening but take this with a pinch of salt. When it happens, you’ll be shown four crystals and you need to pick one of them to get one of the jackpots or the three jackpots if you’re lucky enough. 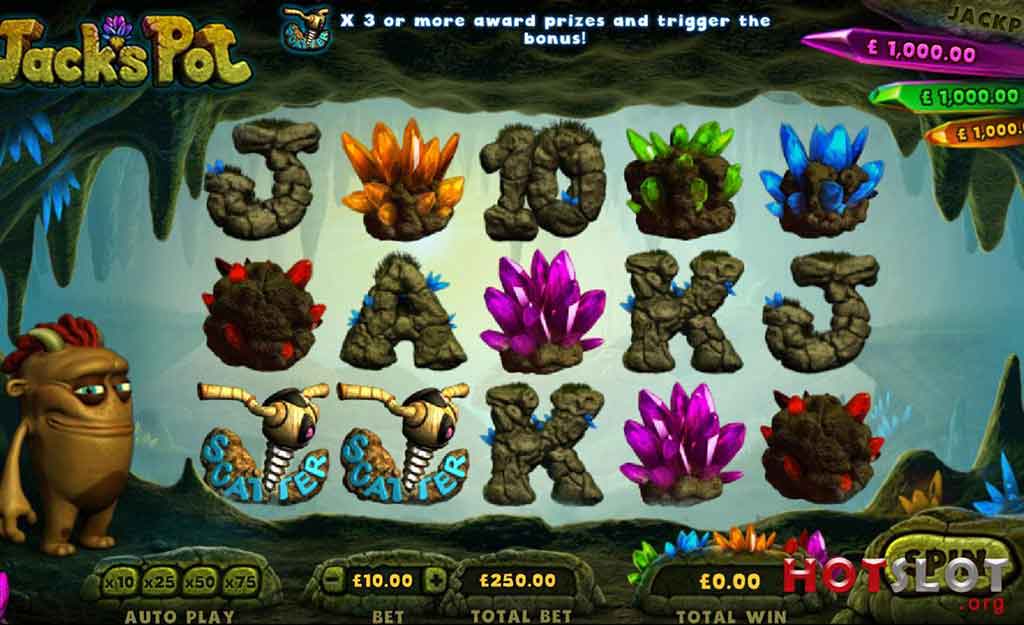 One of the reasons why Irish slots are so popular is the fact that luck is very important in Irish culture and many of the traditional Irish symbols have to do with luck. We’ve got many Irish slots here at SlotsWise. Click on the slot names below to read more about these Irish-themed online games.

Jack in a Pot

Jack in a Pot slots from Red Tiger Gaming is the first Irish slots game on our list, which is based upon the classic ‘Luck of the Irish’ legend. This online slot game features a 7×7 reel grid and benefits from cluster pays. What makes this game much more entertaining are the five bonus features that have a potential of bringing lucrative prizes. So, when playing Jack in a Pot slot, try to activate the Rainbow Swaps, the Beer Reels, the Magic Pipe, the Hat Trick and the Jack in a Pot free spins bonus round.

The second game on our Irish slots list is Pots of Luck slot. The game is developed by OpenBet and includes 5 reels and twenty paylines, which features more than enough winning opportunities for you. Pots of Luck slot also features two bonus rounds the Caravan Free Spins and the Shamrock Surprise.

As we already mentioned, the Irish slots are really gaining momentum and it seems that there are more and more software developers who like to create games that revolve around the Irish luck. The last but not least Irish slot on our list is Pots O’ Gold slot developed by Amaya Gaming and is a classic 3 reel slot with only one payline. This doesn’t make this online slot any less entertaining, especially if you know the fact that Pot O’ Gold comes with a progressive jackpot and a Rainbow bonus feature.

Jack’s Pot is definitely a high-quality online video slot that is a nice addition to the gems genre. Its bonus feature is triggered easily but doesn’t pay that much. The thing you should be watching out for is the progressive jackpot feature which could be very lucrative if luck is on your side. Jack’s Pot RTP is 94.57% which is a bit on the low side, but not the lowest we’ve seen.

Play Jack’s Pot online for the chance to win real cash prizes, but don’t forget to claim your welcome package from those featured here at Slotswise!

Around The Reels In 80 Wilds