Iron Dog Studio has made a Christmas-themed slot that comes with the Megaways mechanism which means cascading wins and unlimited win multipliers. Players can trigger a free spins bonus and land additional free spins with the chance for getting a guaranteed seven-symbol row on every spin. 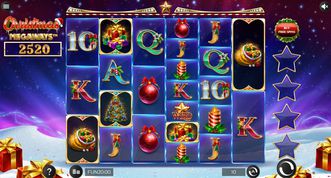 Iron Dog Studio has the present game just in time for the season in which we can feel like being part of a wintry fairytale. The game takes the player to the northern fringes of the earth where the sky is illuminated by the Aurora Borealis phenomenon and the reel set is aglow in the charm of Christmas. This is a perfect background for the theme which features decorated pine trees, ornaments, candles and presents.

To be sure, the company has made Christmas Megaways with that payout mechanism, so players can expect up to 117,649 ways to win and, depending on luck, guaranteed seven-symbol rows during the bonus feature. The latter is one of the highlights because it doesn't allow the win-ways to dip below a certain level. Speaking of presents, this is a feature that we haven’t seen on other Megaways slots this winter season, and that makes the Christmas Megaways slot unique.

The slot design exudes the spirit of Christmas. We can say that it makes perfect sense to play one or few games on the theme even if snowfall is a strange sight in your part of the world. Nevertheless, this Megaways slot comes with graphic design that is appealing, even though there is little animation that surrounds the symbols. The music and sound element of the gameplay is fulfilling and adds to the holiday cheer that accompanies the potential winnings.

As for the symbols and payouts, in the lows category there are five card symbols and the highs category consists of five symbols represent gems, diamonds, candles and ornaments. The two highest-paying symbols of the game are the red and blue diamonds. The first can pay between 20x and 150x the payline stake and the latter can pay between 20x and 500x.

Theoretical Return to Player is a factographic detail that shows the potential return of the wagered money, represented as a percentage of 100%. If you play Christmas Megaways slot you will find an RTP of 96.20%, a figure which is above the average which is 96.00%. Another detail concerns the volatility or variance, which is the same thing that concerns the frequency of the winnings and the size.

Christmas Megaways is a highly volatile game, which makes sense to us in regards to the theme. Some players are going to hit a very big win as the game can prepare such outcomes amidst a multitude of low payouts. On the other hand, the cascading wins payout system can start with a small payout and amount to returning the bet amount or more.

It's been a trend on the increase for Megaways slots that a free spins bonus is triggered with five or more consecutive wins, whenever a scatter/bonus symbol is not part of the gameplay. This is not the case in the Christmas Megaways slot because here players can land four cascade wins and trigger eight free spins.

Each cascade past the four-mark adds two extra free spins to the tally and the maximum is 14 spins. The highlight of the game is when one or more reels lock with seven rows. As it is the case, Megaways slots come with rows that shift between two and seven symbols.

The free spins bonus can ensure that the number of megaways doesn't fall below a specific number for the spin during which seven-symbol reels are intact.

What is more, win multipliers are awarded for each locked reel and as by a rule, if a reel locks with seven symbols on the last free spin, the game awards one extra.

The maker of this game is Iron Dog Studio and this company is part of the 1x2gaming group, which has been making mobile-friendly slot games for a long time. Players who want to play Christmas Megaways on mobile can do so on Android or iOS.

Is there a Jackpot on Christmas Megaways Slot?

The game doesn't come with a classical jackpot prize that warrants an instantaneous payout should it trigger. Instead, a maximum win potential of €800,000 on the highest bet of €20.00 is possible, or winning outcomes up to that figure. As a total win multiplier on the bet, this figure translates to 40,000x your total bet.

Triggering this sum is only possible during the free spins bonus. We can envision high payouts coming from multiple seven-symbol reels and very high win multipliers. Since the game doesn't have a limit in that regard, we can see how the multiplier can reach 10 or more within several spins and thereby significantly increase the chances for a big win or a succession of winnings with a win multiplier.

The game design is appealing, but only for the season, so the game will have a lifetime of several months and it may become memorable enough so as to appear in the following year around the same time. On the other hand, the features are quite decent. Like we said, the only example of a game that can award locked reels with seven symbols is Christmas Megaways slots. The unlimited win multipliers is also a huge plus, so the bottom line is that this is a fun to play game that can trigger potentially huge wins, albeit on a highly volatile model.

Something that is radically more different but still depicts a season of the year, of sorts, is the Helloween slot by Play'n GO, which is steeped in metal music and deep shades of brown and orange, instead of the green and red that permeate Chrismas.