Play with the monkeys for a chance to win a progressive jackpot and base-game prizes in the Monkey Monia slot. This is a Playtech game which starts with a jackpot seed of 90,000 and a respin game where the players can win with four, five, six and up to nine monkeys on the reel-set. The game has scatters which turn into wilds that have a sticky ability. 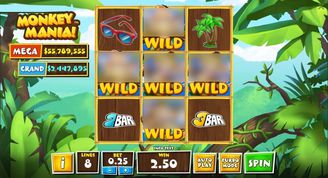 Invite as many monkeys as you can on the Monkey Mania slots party for a chance to win a progressive jackpot prize, which seeds at £90,000.

Who knew that a banana-throwing, monkey-business, jungle-loving online slot can turn out to be such a nail-biter.

Monkey Mania slot is a simple but engaging game that packs a mighty jackpot. Players are welcome to try their liana-swinging abilities by pulling the lever on the three-reel slot that has 8 paylines.

The originators of Monkey Mania are the slots experts behind Playtech Origins. They've decided to go with a simple layout for this jackpot slot. Clever thing to place it in a jungle because this ecosystem brings out the best of the reel adventure at hand.

Besides the base game wins there is the Monkey Mania jackpot game where anything can go down, all thanks to those cheerful primates who can stop on up to nine of the nine-grid reel-set.

Playtech Origins have landed the monkeys on a jungle beach and they are vacationing pretty hard. PArty glasses, funky hats, hammocks a d golden chains, the symbols are all about the easy life.

Their everyday implements are things one would associate with a tropical paradise island: sunglasses, coconuts, palm trees and bananas.

Oh, and there is another symbol that we can associate with monkeys even though it hails from the era of classical slots - the bar symbol - how funny!

Monkey Mania slots is pretty engaging for a simple three-reel game. Make no mistake, Playtech and their Origins studios are experts of the first rank and when they make a jackpot slot, it's made to last.

So whoever is down to relax while the reels do the work for the possibility to return a big win, this is the early 2020 slot to consider for the purpose.

How to Play Monkey Mania Slot

The game plays both on personal computers and mobile and portable devices that run on android or iOS. Set up for the gameplay by making just a couple of clicks - select the bet size and press the Spin button.

All of the controls have been placed below the reels in the top left corner Monkey Mania slot shows the amounts of the progressive jackpots which can stretch to impressive amounts.

The bet can be selected by choosing the payline coin value from the bottom. Use the minus and plus buttons to arrive at the desired payline bet. The bets start at only four pennies per spin while the maximum bet amount can go up to £400.00.

To start the game press the big green spin button which can be found in the bottom right corner To the left of it is the Turbo Mode which causes the reels to spin faster when it has been toggled on.

Yet another look to the left is the Auto Play button which lets the players engage in Monkey Mania's automatic spins mode. Press that button, select a number of spins from the presets and watch the monkeys play for the potential big win.

How to Win Monkey Mania Slots

Land three symbols of the same kind to score a win on this game. One or more wins are possible from a single turn of the reels. There aren't any wilds as a standard game symbol, but wilds can appear on the reels as the result of scatters and during the respins.

The sunglasses are the most valuable symbol in Monkey Mania slot as they pay 37.5x multiplied by the winning bet when three of the same fall on a payline. The exciting prizes don;t stop there because the monkey symbol, which is the scatter, can become a wild which can then combine for a win that pays 43.75x on the winning bet.

The game has a bonus feature which is responsible for triggering the Monkey Mania jackpot game.

This is a completely random event which can trigger following any given spin. In essence, this feature is the same as in many jackpot slots, where coins or a specific symbol appears on the reels and stops for the final tally.

In Monkey Mania the wins start with four monkeys, as these are the only symbols that are available in this phase of the game. This outcome pays 5x on the winning bet. Seven monkeys pay 50x.

Eight monkeys pay the Grand Jackpot while the entire reel-set filled with primates brings the Mega Jackpot, which has a fixed seed amount which resets when someone wins the progressive prize.

For each monkey that stops on the reels the respin counter resets to three. Each time there isn't a win, one respin is taken from the counter.

Playtech might release this game as a free play demo, but then we can’t know for sure because it is a progressive jackpot. Without this element playing it, even for free, makes little sense.

The game is fun to play because of the jackpot element to it. The respins are a fun way to play for the possibility of winning it, and there is the scatter symbol and the sticky wilds that can help make wins on the respin.

Discover the Monkey Mania slots by claiming a welcome offer right from this page and play at top shelf online casinos.