Players will find six reels and five rows that spin across 15,625 ways to win that can turn up winning outcomes according to the adjacent wins payout system. Players can spin on Legend of Hydra: Power Zones with as little as 10p per spin for a reel adventure with 96.56% theoretical return to player and, as of yet, undisclosed variance. 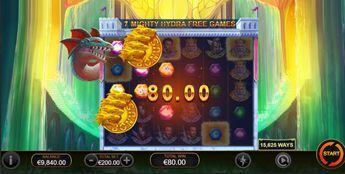 Ash Gaming are gently pushing their way through to charm online casino rosters with their increasingly more amazing productions. Their Leged of the Hydra slot appears like a grid-based game, but comes with a multitude of ways to win, which help create an exciting reel adventure.

The elements that make the game exciting include not just a thrilling base game but also a bonus feature, win multipliers, mystery symbols, a free spins bonus feature and the Playtech-approved Power Zones. All of this is bound together in a math model that can trigger winning outcomes of up to 10,000. Therefore, Legend of Hydra: Power Zones slot.

The game is right up the alley of those who find epic fantasies a world worth exploring and, at points, inhabiting wholeheartedly. The game at hand offers a premise which involves an epic battle between heroes and monsters, with the hydra being the mother of the latter.

High-paying symbols of Legend of Hydra: Power Zones slots are the warlock, the knight, the thief, the king and his charming daughter. Events on the reels, such as winning outcomes and close-calls manifest through a flurry of lights, fireballs and the stuff of magical powers.

Overall, the game is fun to play and visually stunning, so players will have no hard time getting into it - which is helped by an amazing musical score.

How to Play Legend of Hydra: Power Zones Slot

Your adventure through the rugged reels of this Ash Gaming production can begin with the push of the play button, which sends the reels spinning and deducts the active bet amount one time from the balance.

All of the settings in the game can be found at the bottom of the reels, but also the displays. The Total Win amount is shown in the display that is immediately below the reels and the total bet amount can be seen at the bottom left corner, along with the current balance.

Many players prefer to play their favorite online slots in autoplay mode. This option is available in Legend of Hydra: Power Zones slot by selecting the smaller of the two circular buttons that is closer to the Spin button. When the settings menu opens up, the player can select the number of automatic spins from the presets and place few other optional controls.

As for the bet amounts, working the minus and plus buttons on the Total Bet setting enables players to scroll through the available bet amounts. The smallest bet is £0.10 and the maximum bet is a rather high £200.00 per spin. Regardless of the amount of the selected bet, the game will spin on all potential 15,625 ways to win.

How to Win Legend of Hydra: Power Zones Slots

Winning outcomes in this game are made on adjacent reels and must start on the leftmost reel and extend uninterrupted towards the right. Each spin activates the aptly-named Power Zones, which surround the symbols.

In terms of symbol payouts, the high-paying category is spit in two. Each one of the heroes' symbols pays the same amount, between 12x and 24x multiplied by the bet for outcomes between three and six symbols.

The king and the princess of Legend of Hydra: Power Zones slot make payouts that are slightly higher, between 16x and 28x multiplied by the bet for wins between three and six symbols.

The bonus feature is a set of free spins that begins with three or more scatter symbols, which are golden medallions with the four heads of the hydra.

The order of free spins and scatter that are needed to trigger them is as follows:

The Power Zones are active at all times during the bonus feature. At the end of the bonus the game will award the Mega Spin where all Power Zones become the same mystery symbol.

During the base game and bonus feature, winning outcomes that land on the power zones become the same symbol.

Each hydra head casts its own reel modifier on the reels. This ability is unlocked when the meteor symbol lands in the Powe Zone and fills up the meter. Each time the meter is filled, the player gets one of the hydra feature to unlock.

The game can be tried with free credits at online casinos that host free play demo slots. This makes all of the features available, except the winning outcomes are just for show.

Players will find that this is an adventurous slot game that is very dynamic thanks to the ways to win system combined with the Power Zones. It is notable that the free spins bonus is retriggered with only 2 scatters.

Discover the Legend of Hydra: Power Zones slots by claiming a welcome offer right from this page and play at top rated online casinos.