The full 117,649 ways to pay are able to come through on the six reels and shifting rows of the Mighty Griffin Megaways slot. The additional row of four-reel is present on the top to turn up extra symbols which can enhance the winning outcomes and a potential maximum win of 50,000x 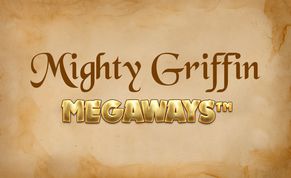 Enter the lost kingdom of the Mighty Griffin Megaways slot, where the maximum maximum payout is 50,000x on the winning bet.

Here is a megaways slot that can deliver what has become a signature slots experience and then some more. This is a Blueprint Gaming production that captures the mythical golden bird, the griffin, along with the likely aesthetics that surround the stories that portray such a world.

One of the defining moments of this release is the maximum prize of 50,000x which is far greater than what has become a standard 10,000x from a single spin on most megaways slots. In addition to this prize, the Mighty Griffin Megaways slot is part of the Jackpot King series and boasts three-tier jackpot prizes.

Blueprint Gaming know how to create a world of symbols and pictures that makes for an engaging visual experience. The backdrop to the reel action is castle perched up on a hill that overlooks a big valley. The mystical kingdom is the home to the Mighty Griffin slot whose picture symbols provide all the magic towards making a big win.

The slots experts haven't created any fascinating production points so animated bits are mostly lacking, but this doesn't mean that the game underachieves in the design department. A sound score contributes to the overall density of the adventure and all makes sense when the winning outcomes ring out in their full glory.

Before you embark on your reel adventure on this game, it's best to make sure that the default bet reflects the sum that you had intended to play with.

The bets can be selected from the bottom left of the screen by clicking or tapping on the bank-note icon. This opens up a list of bets.

The smallest bet is £0.10 per spin and the biggest bet is £10.00, much like in most megaways slots. There is a range of bets between these two sums and for those players who are just starting on the slots, the bets can be changed following any given spin.

To send the reels turning you need to press the gold medallion that inscribes a goden griffin. The Golden Griffin Megaways slot also has an autoplay function, whose button can be found below the previous button.

Selecting autoplay lets you choose from the number presets so that the game can engage in automatic spins.

There are additional options that help you have control over the balance by placing a stop when the bonus feature triggers, when the balance has reached below a certain sum or when there has been a single win of a specified amount.

The megaways style of play makes winning outcomes of of three or more symbols, which can include six for the optimal symbol pay, before any pending multipliers.

The matching symbols need to fall consecutively on the reel-set, however wins also count when two or more of the same symbols are on the same reel and the rest follow consecutively.

The topmost row of four reels can also produce symbols that can become part of the winning outcome on the Mighty Griffin Megaways slots which has 117,649 ways to pay.

The most lucrative symbol is the golden griffin itself which brings 50x multiplied by the winning bet when six of the same fall on the reels. This symbol can be substituted by the wild, which is represented by the book and which only stops on the topmost row.

The main extra feature are the free spins which can be triggered when three or more scatter symbols stop anywhere on the reels. The bonus can also trigger the golden streak feature which plays only the bonus symbols. When a bonus symbol stops on the reels it remains, and thus these can amount to a full reel-set, each one carrying a random number of free spins.

So how do you trigger the jackpot in Mighty Griffin? There is an Jackpot King overlay that can cover any of the standard symbols. In the event, there is a second-screen event where the goal is to get 15 crown symbols, in the event of which you can advance to another set of checkpoints.

It is likely that an exciting slot such as this one will be in demand as a demo. Hopefully, Blueprint Gaming will release it available to the general public and at online casinos that offer their slots as demos too.

The feature, the theme and the potential payouts of up to 50,000x are all the things that comprise a solid online slot and one that will remain on online casino rosters. The volatility is expectedly high and the RTP is fitting for a megaways slot at below 96.00%.

Claim a welcome offer and discover the Mighty Griffin Megaways slots at the online casinos on this page.