Discover the latest megaways action slot, this time around made by Blueprint Gaming and on behalf of and for the famed LeoVegas casino. This is a standard megaways layout - six reels and four rows that can contract or expand, and a top row of four reels that can boost the chances for a win. Land three or more scatter symbols to get a free spins bonus, which is retriggered with additional scatters. 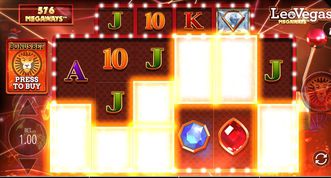 Discover the LeoVegas Megaways slot and play at one of the best online casinos in the world.

Do you what we recognize as a boss move on part of one of the most prominent casinos out there? The making of a slot game with that casino's theme! That's exactly what we have in the LeoVegas Megaways slot, developed by Blueprint gaming.

This isn't the first time LeoVegas are implementing their passion for online slots. They have had other collaborations with well-known online slots developers, such as NetEnt, so it logical that they wanted to get something from Blueprint.

What we have here is the latest addition to the world of online casinos - the Megaways engine, originally developed by Big Time Gaming. This is a mechanism that works with the random number generator in order to deliver the random win or lose outcomes. The one and major difference is that Megaways operate on up to 117,649 ways to pay.

This is exactly how many ways to pay are available on the LeoVegas Megaways slot. The game itself is themed according to an online casino vibe. What we are used to seeing in Las Vegas themed slots such as the Richie in Vegas slot, is presented here on six reels and four rows, which, as we know, are prone to expanding and shrinking thanks to the expanding symbols.

How to Play LeoVegas Megaways Slot

Start the action with the... pull of the lever, on the right hand side of the reel-set. To be quite honest, it may seem like a tacky move, but it is so original because 99.90% of the releases today don't feature the arm that makes these things either one armed bandits, or one armed givers - depending on your personal luck.

Of course, you don't have to pull the lever with each turn. Instead you can use the autoplay button, which is accessible along with the option to set LeoVegas Megaways in automatic spins mode. The game will send the reels spinning for the specified number of times, and all of its features will remain active as normally.

The players can experience the free spins bonus, which has the capacity to produce unlimited win multipliers. The cascading symbols may result in subsequent wining combinations that could in theory, go on until indefinitely. In this type of game, each winning outcome will make room for a new set of symbols, which can in turn create another win, and so on.

The starting bet on LeoVegas Megaways slot is £0.20 per spin and the maximum bet is just £10.00, which is a deviation from the somewhat standard £20.00 for megaways slots. At any rate, the bets can be set form the left side of the reels, by using the down and up arrows. Pressing the circular button will also open up a list of the bets.

How to Win LeoVegas Megaways Slots

The game makes out its winning outcomes in the consecutive reels way of play. The row of symbols on top of the six-reel set provides four additional symbols with each turn, that can become part of a winning outcome.

For a win to occur, there must be a string of matching symbols that isn't interrupted by a reel that does not contain that symbol. The game has a wild that substitutes for any, except the bonus symbols, which are represented by the paw (a mystery symbol) and the LeoVegas logo, which is the game's free spins trigger.

Like we said, the paw will transform into any symbol. It falls on the reels at random and helps to boost the potential outcomes. The only symbol it will not substitute for is the LeoVegas bonus. Four or more of these symbols will trigger the LeoVegas free spins.

The free spins can be retriggered. If three bonus symbols  appear on the reels, the players get five extra spins. Four of the LeoVegas logos result in ten extra free spins. What is more, the multipliers that can boost each winning outcomes will rise with each consecutive, that is, cascading win.

The theoretical return to player outcome follows along the same lines with other Megaways slots. It is above average and doesn’t deviate lower than this game’s competitors. It’s been located at 96.50% and the game itself is a high-variance affair, meaning, a big win is possible following a short period of play, however, smaller winnings will be sparse. After all, the outcomes always depend on your luck in relation to the random number generator.

The game has a solid gameplay, nothing over the top and nothing below our most reasonable expectations of a Megaways slot. It’s been branded by one of the top online casinos in the world, and there is no reason to avoid it just because of that. In fact, the game may be tied to promotions regularly, that is, the players may come to enjoy free spins on this game. Want to know how?

Claim a welcome offer at one of the casinos on this page, or, claim a bonus at LeoVegas, and play this or other exciting slots games.