As it is usual for Deal Or No Deal slots, the most exciting elements of the television show are part of the gameplay, including the game of revealing boxes, instant cash prizes, as well as a free spins bonus feature. Some players will discover the Lightning Spins element of the game. This is the bonus feature of Hold and Win, where one and the same symbol appears on the reel-set, tasked with filling up as many positions as possible. 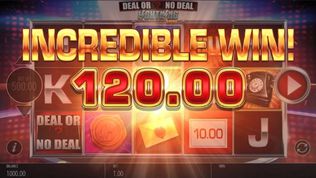 Blueprint Gaming are continuing the famous Deal Or No Deal saga in the world of online slots. Their latest release puts the players in the hot seat and up against the banker, who is presiding over a reel-set of three rows, five reels and 20 always-active paylines.

In terms of graphic design, Blueprint Gaming have instilled the game with the best video effects the television game show theme can sustain. Wins are marked by a good deal of motion surrounding the symbols that have been involved, and the picture or game-show symbols are also animated.

The high-paying symbols category consists of the mug, the Deal or No Deal slot logo, the wax seal with the letter B (for Blueprint) inscribed, the golden envelope, and the telephone. Low-paying symbols consist of the royal cards made in a silver finish.

Throughout the reel adventure on the Deal Or No Deal Lightning Spins slots, there is a dynamic that makes the gaming experience amusing, and that's only for the design aspect of the game.

How to Play Deal Or No Deal Lightning Spins Slot

To start playing, players can use either the spin button or the autoplay option. The first is represented by a green, circular button on the right-hand side of the reel-set. Pressing it once deducts the active bet amount one time from the balance.

Autoplay is perhaps the more preferred option to play by players who are decided on staying with a particular slot for more than a handful of spins. Autoplay enables you to kick back and relax, without having to press Spin for each turn on the reels.

Pressing the autoplay button in the bottom right corner of the screen opens up a menu where the players can select from the automatic spins presets and add optional controls that place stops on specified actions resulting from the balance spend.

Last but not least, Deal Or No Deal Lightning Spins slotshows all of the potential payouts around the symbols on the paytable. Press the 'i' button to find out about the bonus feature and the payouts for each specific symbol and win outcome.

How to Win Deal Or No Deal Lightning Spins Slots

Scoring win outcomes occurs with three matching symbols. Wins with four of a kind makes for stronger payouts, while five matching symbol wins equal the best payouts. The game has a wild symbol that helps substitute for any of the standard symbols on the Deal Or No Deal Lightning Spins slot paytable, excluding the bonus symbols.

The red boxes that show a specific amount on the front are those that can trigger the Lightning Spins bonus game. Six of these symbols appearing on the reel-set will award the cash amount that's been collected on aggregate.

The Hold and Win type of bonus starts with three spins. Each time one or more red box stopping on the reels on the turn, resets the respins back to three. The jackpot prize is awarded when all 15 positions on the 3x5 reel-set have been filled by red boxes.

Meanwhile, any of the three smaller jackpot prizes are paid when the symbol that corresponds to that jackpot prize lands on the reels during the Lightning Spins bonus.

Three or more scatter symbols trigger the free spins bonus, where the players can choose from the boxes to reveal the number of free spins as well as an instant cash prize that comes attached to one of the boxes on the left.

The Deal or no Deal saga has reached epic proportions, when it comes to online slots and noone is surprised because the television show is one mighty source of entertainment. With the number of slots comes the dilemma of choosing which to play.

The fact that there is a DOND Megaways slot and a Slingo version attracts players who prefer these games. The Deal or no Deal Double Action is also its own thing with a specific set of features, but the game at hand is comparable to Deal or no Deal Bankers Riches slot.

Both games come with a layout of three rows and five reels and spin across 20 paylines. Those who are after the big riches can turn to the Lightning Spins version because the payout potential is 5000x compared to 2000x your bet on the DOND Bankers Riches. On the other hand, the latter is a medium variance slot while you can play Deal or no Deal Lightning Spins on medium to high variance.

The game is bound to appear as a free play demo slot at online casinos that enable the players to play their games in practice play mode. This enables the player to discover the features, the potential payouts and more about the particular game, with free credits instead of depositing real money.

There are several DOND games released as online slots and there will be more to come. This is the latest one (June 2020) so fans of the television show will be tempted to try it out. On the other hand, the gameplay is inviting to any slots players, regardless of whether they are a fan or not.

Discover the Deal Or No Deal Lightning Spins slots by claiming a welcome offer right from this page and play at top-rated online casinos.

Deal Or No Deal: Double Action