Ted Megaways comes with six reels, between two and seven rows and an addition row with four reels that we are used to seeing in games like Bonanza Megaways. Players can play with as little as 10p per spin on a game that has a theoretical return to player of 96.03%, high variance and potential payouts of up to 50,000x multiplied by the winning bet. 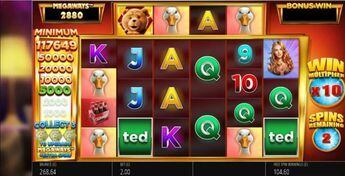 Blueprint Gaming are champions when it comes to licensed content based on popular television series or Hollywood movies. The company released the Ted slot few yeas back and it became an immediate success thanks to its many bonus features. This time around, Ted gets an upgrade with the help of the 117,649 Megaways ways to win

Players who have enjoyed the 3x5 layout are going to find Ted Megaways slot more than engaging. Payouts are made with three or more symbols that can land across adjacent reels, from left to right. The game comes with several features, whose names reflect the mind and ways of the little cynical bear: Beer Shuffle, Psychedelic Colossal Spin, Laser Gun Wilds and more. All in all, we are in for a super-dynamic adventure on the reels.

In terms of graphic design, the game offers the expected - a background that represents Ted's bachelor room, while the ree-set reflects some of the characters in the movie. Nothing new there, it's just a Megaways mechanics behind an artwork that is quite similar, if not the same, on the old Ted slot.

Nevertheless, players will find Ted Megaways slots fun to play, as you really don't need any highly-bombastic video effects here. Some of the symbols are animated just enough, but it is the megaways payout system and the cascading wins that bring out the best in this title.

How to Play Ted Megaways Slot

Playing the game requires finding your way around the layout of controls and buttons, but first things first, you need to choose a wager for your game.

This can be done by either pressing the circular button on the left side of the reel-set and choosing one of the available amounts on the table, or by pressing the minus and plus buttons that are on top and bottom of the circle.

The bet amounts in Ted Megaways slot begin at 10p per spin and have a maximum of £10.00. Regardless of the amount that you select, the game will play across all potential megaways.

One way to play the game is by selecting the autoplay mode. This can be done by pressing the small circle in the bottom right corner of the screen. Once in the menu, the players can choose the number of automatic spins from the presets and add controls on the spend limits and few other options.

Ted Megaways comes with a buy feature, which enables the players to buy an instant free spins bonus. This costs quite a lot, and it isn't available in all countries, so it is best to consider whether you want to pay a huge sum in return for the bonus which can trigger sooner or later on its own.

How to Win Ted Megaways Slots

In terms of the payouts and how these work, the game has the cascading wins payout system, which causes the reels to trigger successive wins from the same bet. Winning outcomes are removed from the screen and the blank positions are filled by new symbol drops.

In terms of payouts, Ted Megaways slot has the usual for any megaways game: symbol payouts are low, but that's only because of the cascading wins possibility. At any rate, the game's logo is the most valuable symbol and pays 50x multiplied by the winning bet for six matching symbols across the reels.

The game comes with a wild symbol (Ted) that substitutes for all, except the other special symbols, which are scatters and mystery symbols.

The bonus game is called Thunder Buddies and is triggered with four or more scatter symbols. This is one of those megaways slots that offer either a number of free spins, in this case 12, or to gamble those and get either a better or worse outcome.

Whatever your choice, the free spins bonus has win multipliers that go up by 1x for each cascading payout. Ted's symbols are gathered in the meter below and turn into two free spins for each three that are collected.

The game may be available as a free play demo slot at some online casinos that enable the privilege of practice play. This enables players to try the game’s feature and decide whether to play with real money.

It’s a marvellous thing to see, we mean Ted, doing what he does out on the loose. The movie was raunchy but both online slot versions are toned down. Nevertheless, this is a great megaways game to consider playing.

Ted Megaways Compared to the Original

Although we can see the potential and the fun of this new Ted Megaways Slot game, it is important for us to take a look back at the original and see what the differences are.  Now, this is a Megaways game for starters, so the wins will be wildly different to the original with a standard set of non expanding reels.  The problem with the new Megaways, is that it seems to have a lost a lot of what we could see of random base game features that the old game had.  Personally I know that a lot of people were always kept intrigued by the vairous 6 base game random features that could trigger at any point.  With those missing from this new game, people may feel a bit let down.  All in all though, in terms of wins, this Megaways game has huge potential!

Discover the Ted Megaways slots by claiming a welcome offer right from this page and play at top-rated online casinos.

When is Ted Megaways Slot Being Released?

Ted Megaways is set to be released to online casinos on the 30th of July 2020 - we are confident it will be readily available, being a Megaways Game!