Play the craziest slot machine out there with Kenny, Kyle, Cartman and Stan. Anarchic but always hilarious. 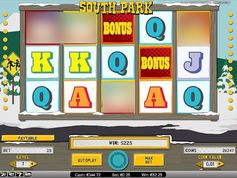 There couldn't be a person in the world who hasn't caught a thing or two about South Park - the famed animated young adult and adult television show originally aired on US network Comedy Central. We are not exaggerating, because South Park has entered pop culture and consumer culture, with thousands of products and clothing with the show's memorable characters.

Indeed, South Park has such a cult following, that it only made sense producing a slot game with the same title. So we have here the South Park slot made by the slots experts at NetEnt who have breathed some of the haps and mishaps inside the five reels and three rows on this 25 payline slot.

But besides the gameplay details there are the winnings and bonus games. The highest paying symbol of the regular ones is, not strangely at all, the Cartman character, who delivers 750 credits for a line of five. Considering this is Net Entertainment's first ever branded game. we are not surprised that they have invested so much energy and attention to detail in providing us with a smooth gaming experience. So what else is there to say. Learn how to play South Park slot and what does it mean to enjoy the South Park free play.

How To Play South Park Slot

It being a NetEnt game makes the wagering setup steps familiar and easy. All that you have to do to begin playing is figure out the coin value and the bet levels. The paylines will always be active with every spins made on the reels.

As for the coin value, it starts with just a penny and goes to £1.00. When you notch up the bet levels, the sum that you have selected, and which is automatically extrapolated across the paylines, will be taken up the level that you choose. So, at the first level, playing a penny means your total wager per spin is £0.25. Playing at the highest tenth level with £1.00 means the total bet per spin is £250.

There are few other buttons that are important or pertinent to the gameplay. If you want to pull up the paytable simply click on the button with that wording which is located above the Bet Level setting. The centrally placed Spin button is flanked by the Autoplay and the Max Bet buttons.

Sadly, and we have no idea due to what reason, NetEnt did not include additional characters such as Tweak or Craig or Token, however Jimmy does appear, as well as Butters and Mr. Garrison. The standard characters light up and become animated when there is something going on the reels, such as a winning combination. At any rate, we wish there were many more South Park characters instead of the boring symbols represented by the cards randing from jack to ace.

And here we will state the most unsavory element we have found in a slot game. For some reason during the South Park free spins bonus, Stan and Wendy are in the center stage and Stan is wobbling from being sick. With each winning combination Stan literally vomits in Wendy's face, which is absolutely disgusting. But hey, this is South Park slot and it stays true to the series, which have treated their viewers to some outrageously disconcerting footage. Then during the base game you will get to see quite a lot of Mr. Hankey the Christmas poo.

How To Win South Park Slot

The game has several bonus features, which makes it all the more fun to play. Considering the absence of a hefty jackpot prize, the South Park bonus features are what compensates in that regard, so when you land these during your play you do stand a chance to ring in some nice winnings, especially if your winning bet has been higher than the miniscule amounts.

How to win the South Park bonus play? Have three of the Bonus symbols land anywhere on the reels will trigger one of the few. For example, the Bonus symbol with Kenny will start the game in which you select the part of the road on which Kenny will move, so as to avoid killing him. He will get run over by a bunch of penguins, but he is safe and so are your winnings, as long as you don't meet the truck.

Kyle Broflovski has his own bonus. In it, during the free spins the Wild symbol is his brother. Once the Wild makes a winning combination, the tiny Ike Broflovski comes into the play. Kyle punts him, Ike bounces off of the mailbox and lands on the multiplier amount on the ground. This is seemingly a brutal way to land winnings, but hey, it happens and the winnings can be awesome.

To play the South Park slot you can start by claiming your welcome bonus at the casinos we have right on this page.