Players are going to find a layout of three rows and five reels that is populated by the heroes of the Top Cat fame. There are 10 paylines and that seems sufficient for having decent potential payouts as you play Top Cat Most Wanted. The theoretical return to player (RTP) is quite a decent 96.12% and the math model spell out medium volatility. PLayers can wager as little as 10p per spin for a chance to win more than 30,000x multiplied by the bet. 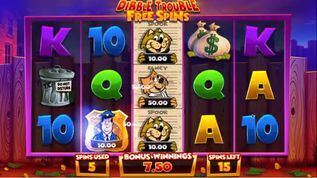 One of the most beloved cartoon from the old days of the Hanna-Barbera era has already been made into an online slot by Blueprint Gaming. That was the aptly titled Top Cat slot. Some years later the same company is making a new take on the game and its heroes. This time around it is called Top Cat Most Wanted slot, a game that is a lot simpler than the previous one and for many reasons, potentially more engaging.

Unlike the first game of the same name, sin the 'Most Wanted' subtitle, the present game comes with a single feature only, which is not to say that feature isn't worth its weight in salt. Players get to enjoy a fun-loving base game without it, but the bonus is something that everyone is anticipating to get because of its potential to pay a swell prize.

Players are going to discover a game that looks and feels as familiar as the famed cartoon. Regardless of whether you had watched it or not, the game plays and feels like a proper online slot. You will encounter all of the cats, such as Top Cat, Choo Choo, Brain, Fancy, Spook, officer Dibble, the trash can and so on.

Top Cat Most Wanted slots doesn't have too many moving parts on it. The cats are not animated even when they are a part of a winning outcome, but there are enough visual effects, shading and light to create a sufficient environment for having fun while playing for the potential payouts on this game. There is also a decent musical theme, so all in all, it's a game that is strikingly similar to its predecessor.

How to Play Top Cat Most Wanted Slot

Playing the game requires setting up for the reel adventure ahead. Players who are new to Blueprint Gaming slots will receive a quick tour of the premises.

The button that causes the reels to turn is the one that is a big round arrow and is located on the right side of the reel set. Before you give the game a go, it's best to check out the amount of the bet per spin, which is shown at the bottom part of the screen in the middle area.

To change the bets on the Top Cat Most Wanted slot, you need to press the circle button on the left side of the reels and select one of the bet amounts from that menu. Bets range between just 10p per spin and reaches a maximum of £200.00 per spin.

Players can play Top Cat Most Wanted in autoplay mode which can be set up by selecting the smaller circle in the bottom-right corner. Adding a maximum win limit or a loss limit in order to stop the automatic spins is optional and can be selected from the settings.

How to Win Top Cat Most Wanted Slots

The random number generator must create three matching symbols across the reel set, starting from the left reel and extending to the right. The royal and number cards are the low-paying symbols. Basically, most of the winning combinations that are made with these symbols don't return back your full stake.

The premium symbols are different in that most of these can pay more than the bet. The high-paying symbols are the money bags, trash cans and the fish bones. These can pay amounts that are much better, such as up to 200x multiplied by the bet for those who are lucky to get five of a kind across a payline.

The bonus is a free spins game that can trigger with three or more bonus symbols anywhere on the reel set. Three, four and five symbols reward 10, 15 and 20 free spins respectively. This is where Top Cat Most Wanted slot can work its magic towards better paypots.

One of the symbols that can appear during the free spins is that of Officer Dibble. Whenever there is a cat symbol in view and there is Dibble nearby, the value that's been ascribed to the cat symbol is collected and added to your pot.

The more cats you get to stay in view along with Officer Dibble, the better the cash prizes. Dibble is a paying and substituting symbol too that can fetch up to 500x your bet if he lands in five position on a payline.

Players can try the base game and the extra feature with free credits at online casinos that host the game in Practice Play mode. This is essentially playing the game as free play demo slot, which means it is not possible to collect real cash winnings.

Overall, it’s a decent game to play. Comes with less features but the only one that it has is decent and can result in good payouts. Also, there are few symbols that pay great amounts, but you need to be extremely lucky in order to get them to land in five positions on the reels.

To discover Top Cat Most Wanted slots choose one of the welcome offers, claim it and play at one of the best casinos on the internet.