Play one of the most fantastic Chinese-themed game called Golden Toad!

A brand-new Chinese themed game which will shock you! Red Tiger Gaming is the master of creating the Chinese related games, and they proved it with Golden Toad online slot video game. 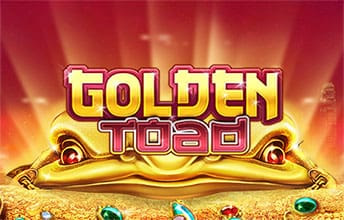 Red Tiger Gaming is known for their desire to represent China and everything that they possess. Once again, they have done a great job with one of their latest online slot video games called Golden Toad, and it is all about the golden frog which received a protagonist role in this slot. The Golden Toad is a mythical creature that appears under the full moon and tends to bring new homes and businesses good news. This is Red Tiger Gaming’s way of sending luck to your home, in hopes of earning few K in bucks and placing a smile on your face.

Try it on some of the casinos that are on our site, claim the free spins and welcome bonuses to get you kick-started in this game.

The theme of the game is rather interesting. In the back, there is a field full of golden flowers with some big buildings in the back. The reels are taking a big part of the screen, placed in the middle, and they are held by the giant golden frog, whose face can be seen over the reels.

The typical Chinese music flows in the background, and although on 1st glance the giant frog looks like a terrifying creature, it’s really rewarding. Just try not to get scared away by the big red eyes.

With five reels and ten paylines, this Golden Toad has more than enough paylines and frequent winning landings to keep you satisfied whole day. Se the wager from £0.20 up to £60.00 a spin, where the maximum amount that you can win reaches £3,000 jackpot. There “Max Bet” option is here to set to the max denomination and activate all of the paylines, and the “Auto Spin” will set the reels turning with you previously stating the desired number of spins and denomination.

There are two categories of symbols – high and low valued ones. The low valued ones, as expected, are the deck of playing card inspired symbols starting from the number 9 and going all the way to the Ace. The higher valued ones include three golden emblems as tokens, in different shape, as visible on the screenshot above.

To make things interesting, there is a Wild and a Scatter symbol represented by the Golden Toad itself. The wild symbol is used as a substitute for the normal symbols, while the scatter is here to activate the Free Spins feature.

There are two bonus features in Golden Toad, and Red Tiger Gaming knows that this will trigger the attention of people playing slot games.

In the first one, there will be random wild symbols placed on the reels before the reels start spinning, which will definitely improve the performance of the game and the payouts.

By landing three or more Golden Toads anywhere on the reels, you will activate the Free Spins Feature. In this feature, the wild symbols that land on the reels will get locked and will proceed to stay locked in place until the feature ends. This means that the chances of winning in the free spins feature are gradually increased, and you don’t need to start from the 1st reel to land a winning combination. You can start from any reel, as long as the same symbols are adjacent.

As a brand-new game from Red Tiger Gaming, it is interesting to see how it will progress and will it make any impact on the attention of the online slot players. Golden Toad has everything it needs to become one of the top games, and with all the bonus features, fantastic graphics and interesting set of reels, it most definitely feels like the next big thing.

Check it out on some of the casinos that we have, as they are offering welcome bonus and free spins. Good Luck!