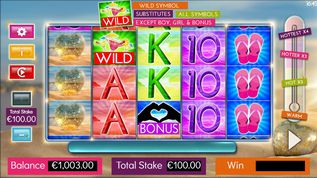 Play the Love Island slot for a chance to win the top symbol pay of £2500 and a theoretical maximum payout prize in the realm of seven figures. Additionally, experience multipliers of up to 4x and bonus features, such as free spins and expanding wilds.

Love Island is a popular reality TV show that has its own editions in multiple countries and territories. The release of Love Island slingo had become a part of the slingo repertoire and for quite some time it was one of the best ranking slingo games. Now we have the Love Island slot game, produced by the Storm Gaming Technology company, who've made an attempt to build a representation of the visual layout of the show. The reels of the Love Island are five in number and they interact across three rows. There are 20 paylines that are always active and a bunch of on-point symbols, among which are few specialty symbols.

As part of the gameplay is a gauge located to the right of the reel-set, which represents something that we may call a love-o-meter. Underneath it is the blinking glass heart for the play button, and above on the gauge are three multipliers that start with x2 and end with x4 for the 'hottest'. This becomes filled up with each re-triggering event that occurs during the free spins game and once it reaches the top level, a hefty multiplier gives a kicker to all of the triggering bet winnings.

It may be worth noting that the paytable is dynamic so the players can set their bet per spin and see how it is going to reflect in the symbol pays area. With the most expensive bet of £100, Love Island slots can deliver a maximum possible payout of 3,505,750.

How to Play Love Island Slot

The game has a fixed payline mechanism which leaves the players without the need to activate or deactivate any of these. The bet is set through the button labeled Total Stake, located to the left of the reel set. The smallest available wager is £0.20 and the most expensive one is £100, however there are many amounts that can be selected from in-between the two extremes.

There are few other buttons that can help during the gameplay. The autospin button lets the players set a number of automatic spins, but unlike in most other new slots, it doesn't come with a win/loss limit. At any rate, the highest number of 100 could come in useful for any player who wants to kick back and relax while letting the Love Island slot spin on its own. This button is located to the left of the reels, above the Total Stake button.

The other relevant buttons are those that bring up the paytable and the settings. The first is above the autoplay. The paytable is the area which displays the symbol wins and the details around the bonus features, as well as the paylines. The Love Island payline is dynamic, which means, the values will change with the bet. Last but not least, the settings button serves to toggle on or off some gameplay options.

The designers at Storm Gaming Technology have done a quite decent job in grasping the stuff that makes the popular television program. There is the sand that reminds of the pristine beaches, there are the implements of beach-goers such as a beach ball, a pair of flip flops, cocktail glasses complete with straws and umbrellas, the Love Island heart made of glass, and others.

The game's symbol of lower value are the high cards, which start with ten and end with the ace. These are all done in candy colors to match the similar layout, all towards the effect of being on the Love Island slot.

How to Win Love Island Slots

There are enough top paying symbols in the high value category of picture symbols that make this one of the more lucrative slots. With a maximum payout of £3,505,750 Love Island is one of the most prized slots out there, however, ambitious players should note that this is only possible with the highest bet of £100 and through a sequence of events in which all of the maximum prizes are paid and maximum number of retriggers occur on the free spins.

Then there are multiple bonus features. One of these is the occurrence of expanding wilds in the shape of the male and female beachgoer symbols. This can only happen when both of these symbols appear on reels two and four. In the event, they will expand and give their best to interact with the other symbols in forming a win.