The name of the game is Moley Moolah slot and it comes with a payout of three rows and five reels that can pay across 10 paylines, which, by the way, can pay both left to right and right to left. So far, so good, or so we think. Players can make bets that are as little as 20p per spin and count on a theoretical return to player of 95.74%. 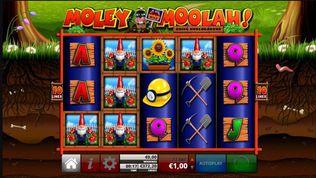 The Mega Moolah slot had built a name for itself from the very first moment it dropped its first progressive jackpot. Many milestones were to follow, such as the size of the pot growing bigger and bigger, until it became the biggest online progressive jackpot prize ever to be awarded.

Microgaming followed on the success of the original Moolah game by releasing Atlantean Treasures: Mega Moolah, Absolootely Mad: Mega Moolah and the altest Fortunium Gold: Mega Moolah slot. But wait, someone else is banking on the name - a bunch of moles digging for gold underground.

But wait, if the word 'Moolah' is in the title, shouldn't that suggest this is a progressive jackpot slot and that the RTP should be a lot lower? Well, if you play Moley Moolah slot you will find out soon enough that the game is not part of the Mega Moolah fame.

Players are not going to have a difficult time settling in their seat to play the game, mainly because the maximum payout potential is 6750x multiplied by your bet. But that doesn't mean Moley Moolah is a jackpot slot. There are

Design-wise this release looks like it was made in 1999 but that's only the effect of the finish on the symbols and on the background. The style is retro and it seems to work because most of those who've heard of Mega Moolah have a retro look and feel in mind.

Reflex Gaming has succeeded in producing an apt mimicry of a original and we are fine with that. but distinguishing players who are looking for a jackpot counter may simply step back from the welcome mat.

At any rate, Moley Moolah slots has few tricks up its sleeves, such as the quadruple reel set that is part of the bonus feature, where players can see golden coins and acorns raining in case of a big win. Graphics-wise, the game is not a huge travesty, but then it couldn't have been made better considering the choice for a title.

How to Play Moley Moolah Slot

Reflex Gaming has furnished the controls layout on this game with big, blocky buttons and Yggdrasil Gaming has gone with. Sure, why not. You can't miss the spin button if it were the end of the world and you are trying to make one last go for the win which can be a gratifying accomplishment before the alien invasion. But all jesting aside, Play is at your disposal in the bottom-right corner of the screen and Autoplay is to its left.

The latter enables you to play Moley Moolah hands-free. Just select from the automatic spins presets and hit the play button to have the game underway, but before doing that it's best that you select a stake from the available range, which begins with 20p per spin and ends with £100.00.

The window in the middle shows three different numbers: the hour of the day or night, the available balance and the latest win amount. To the left is the settings menu and another look to the left you have the paytable button which shows all of the symbol payouts plus information about the extra features.

How to Win Moley Moolah Slots

In terms of payouts, the game is as common as a house sparrow, or as a common lizard you may say, which means winning outcomes are paid for three matching symbols across the ten paylines. But let's not forget that the moles of Moley Moolah slot can make the payouts count both right to left and left to right.

In terms of value. the game's logo is most lucrative one on the paytable. Five of a kind pay 50x. The wild symbol is a crate of dynamite sticks and it substitutes for any of the standard paying symbols.

The game has a free spins bonus and another feature called Wild Reels. The former is triggered with three bonus symbols that have to land on the odd-numbered reels to award 12 spins.

The bonus is the base game but upgraded with an acorn-collecting feature. The more acorns you collect, the more reel-sets open up to your advantage. If you get all 20 acorns you are treated to a 250x bonus prize.

The Wild Reels is basically a wild-symbol transforming modifier. When the mole appears on the reels with a sign in its tiny hands, the game may or may not throw in the extra wilds.

Players can try the game as a free play demo slot at online casinos that host games that are part of Yggdrasil’s Masters series. All of the features and the full math model is available in the demo game, but winning outcomes are not paid in cash.

A raging right is at work in bringing the decision whether the game is a yay or a nay. While we can’t get over the fact that Reflex has jumped on the ‘Moolah’ connotation, the game actually plays decently enough. So, make what you will of that.

Discover the Moley Moolah slots by claiming a welcome offer right from this page and play at top-rated online casinos.

Wild Tome Of The Woods