Jewel of Athena plays on three rows and five reels that spin across 25 paylines. Winning outcomes are made with three or more matching symbols and there is the wild symbol to help in that regard. The base game is alright, as it can create the online casino experience which can result in good payouts. It is however the free spins feature that carries the element of surprise. 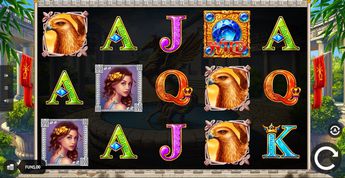 1x2gaming are known for making decent online slots that are never cluttered with bonus features. They are continuing in that vein with the Jewel of Athena slot, which takes the player to the Athens of antiquity, where the usual is to be found: temples, mythological animals, gods and artifacts.

1x2gaming have made several interesting slots in the past months, such as the Book of Merlin slot, Irish Love and the bizarre but awfully engaging Space Christmas. So we have many reasons to see this game becoming one of those little-known games that has a following. So, let's look at it in further detail.

In terms of game design, this game does well what it is supposed to. It creates potential wins on a visually pleasing reel-set and symbols that sprint to life when they are part of a winning outcome. The pegasus moves, the winged sandals lift up and so on. There isn't anything magnificent about it, but it's better than the symbols just staying still.

One of the more impressive elements of the overall design is the musical theme. It is something that reminds of an Irish harp song rather than a melody composed in ancient Athens. Nevertheless, Jewel of Athena slot is complete thanks to this element, and needless to say, it doesn't leave you bored at all.

How to Play Jewel of Athena Slot

On the matter of setting up for the gameplay, the only action that needs to be taken is to select the bet. The casino where you may be playing this game may have a rather high default bet, so changing it is a smart thing to do at the start.

Choose the bet by selecting the two stacks of coins in the bottom left corner of the screen. This will open up a bar at the bottom of the reel-set, from where you can use the minus and plus buttons to select the bet amount.

Jewel of Athena slot has a smallest bet of £0.25 and a highest bet of £50.00 per spin. Split across the number of paylines, the payline bets start with one penny and have a maximum of £2.00.

Anyone who wants to recline and let the game play on its own can do so by selecting the autoplay button, which is the smaller of the two circular buttons on the right. This button opens up the automatic spins presets. Select a number then press the autoplay button again.

For additional options in the autoplay menu, select the Autoplay tab from the main menu and then choose the conditional stops, such as single win limit amount or bonus feature trigger.

How to Win Jewel of Athena Slots

Maybe the game has only one bonus feature, but the potential winnings are definitely something to consider over many other online slots.

The most valuable symbol is that of Athena. Her portrait framed in ancient columns pays 1000x on the payline bet for five matching symbols. Four and three matching symbols pay 375x and 60x.

The minor symbols consist of the royal cards and pay amounts that are significantly smaller.

The bonus feature is triggered with the scatter symbol, which is the Athenian temple appearing only on reels one, three and five. Three of these trigger five spins.

During the free spins the wild jewel symbol substitutes for all symbols, stays on the reel-set every time it appears and awards one additional free spin for each symbol.

It doesn’t sound like much, but three or four wild symbols within the initial five spins can result in a number of hefty wins. These are definitely helped by the wild and its ability to substitute for any. The maximum number of additional free spins is 15, owing to the number of positions on the reel-set.

The game can be found as a free play demo slot at online casinos that allow free credits to the games on the roster. This enables the players to try any game for free and to decide whether it is good to play with real money.

The top symbol payout brings 1000x multiplied by the payline bet, which isn’t that great of a prize. On the other hand, the wilds can help to this kind of a payout occur more than one time in the game. Some among the remaining symbols also pay decent amounts, so the game may be worth checking out after all.

Discover the Jewel of Athena slots by claiming a welcome offer right from this page and play at top rated online casinos.