Play Burn'em Up slots and burn some sevens in return for cash prizes. There are four combinations of this symbol, each of which comes with a cash prize. However, the most lucrative prize is with the wild, five of which bring 5000x on the line bet. The game has a free spins bonus that is triggered with three or more scatter symbols. 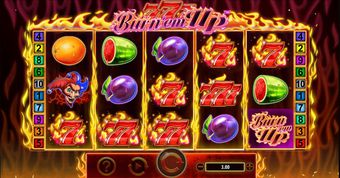 A slot game that is in the sign of the sevens is something worth noting by the retro slots players out there. This time around the slots experts at Barcrest bring us the Burn'em Up slot which features lots of the burning sevens, which are a symbol that is associated with classical slots machines, such as those found on the Las Vegas casino floor.

The game features five reels, three rows and ten always-active paylines. Those looking for a bonus feature will be surprised to discover one, because as most of us know, retro and classical slots will most likely lack one. Not the Burn'em Up slots. There is a free spins bonus, as well as a wild symbol which substitutes for any other symbol except the bonus trigger.

Regarding the style of play, this is a multiway game with ten paylines that pay left to right. All of the winning outcomes are paid according to the symbol's value multiplied by the line bet. And when it comes to the potential winnings, Burn'em Up has symbol pays that are quite solid, with two of these paying 1000x or above, and we'll get to that soon.

The slot design is quite basic, but not poorly so. The bottom of the reel-set has the visual effect of the flowing of flames, with the occasional embers wisping up towards the night sky. As the title suggests, fire is the element that defines the graphics design, so everything has been laid out in shades of orange, red and deep yellow.

When the Burn'em Up free spins bonus feature is awarded, the screen lights up on fire. With each winning outcome the paylines are accentuated by an animated line and whenever the sevens are involved, they burst up in flames.

Surprisingly, there is a musical score and it awfully reminds of the forward-scroll beat-em up arcades of the early 1990's, which isn't such a terrible thing to listen to. The winnings are marked by a fanfare sound and room ambiance much alike that of the casino floor.

How to Play Burn’em Up Slot

Set the game for the play by selecting the total bet. This setting is located right underneath the fourth reel and you can use the minus or plus buttons to arrive at the wager amount that you will find preferable.

When you are ready to play hit the Spin button underneath the middle reel and see the reels turn once. If you want to set up the autoplay feature then use the button that is to the left of Spin.

This is where you can choose from the number presets that represent the automatic turns of the reels. When you expand the menu by clicking the green arrow an extended menu opens up with options to set a single win or a total loss limit.

You can view all of the game's symbols and their value when you select the paytable. This area of the slot game is represented by the question mark symbol located to the left of the autoplay button.

Here you can view the game rules and the symbol values, as well as the Burn'em Up RTP.

The most lucrative symbol of the game is the joker, which is the wild. It pays 5000x on the line bet. It is followed in value by the crow, which pays 1000x when five of the same land on the line.

How to Win Burn’em Up Slots

Winning the game presupposes hitting payline wins of four or more symbols, or at least three or more of the same consisting of the game's high paying symbols.

Like we said, the most lucrative prizes come with the joker and with the crown, but there are also the fruits which are the low-paying symbols, and the combination of sevens, which are medium.

The single seven pays 100x, the double pays 150x and the triple does 250x. There is another smaller symbol that pays 50x when it lands on a payline in five instances.

The Burn'em Up slots bonus feature comes with three or more of that symbol.

Land three of these symbols to get 12 free spins, four to get 18 free spins and five to get 24 free spins - anywhere on the screen. What is more, this bonus feature can get a retrigger if three or more land anywhere on the reel-set during the bonus.

We’ve seen few of these games that are styled just like Burn’em Up, but that doesn’t mean the game is dated or uninspiring. With a top payout of £250,000 gotten from the top line bet of £50 multiplied by the 5000x five wilds, there is a lot of cash between the reels. If you are feeling lucky you can give it a try.

Claim a welcome offer to one of the best UK online casinos and play the Burn’em Up slot.