A Barcrest games slot with a theoretical return to player of 98.00% bears the spintastic name Super Star Turns slot. The reel action unfolds on three rows and five reels, which spin across a total of 40 always-active paylines. The players can start playing with a small bet of just £0.10 towards triggering the eventual bonus features which include three wheels of fortune and lots of multipliers and cash prizes within. 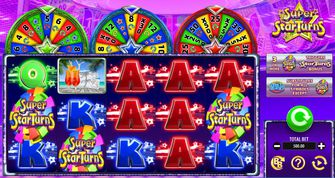 Play the Super Star Turns slot for a chance to win a maximum payout of 250x your bet for the spin. Play the Big Bet bonus for additional chances for a big win!

Just about when it is time to plan a vacation Barcrest releases the cocktail-heavy, leisure-inspired Super Star Turns slot. The entire game reminds of a game show in which the contestants get to turn the wheel of fortune and anticipate prizes at each stop. Perhaps the reason for the resemblance is due to the three wheels at the top of the screen. They provide free spins, multipliers and bonus cash to the luckiest players out there.

The Super Star Turns slot has five reels, three rows and 40 always active paylines. The reel set occupies most of the screen with the three fortune wheels placed above it. The Super Star Turns game logo is in the upper right corner of the screen with the information on the Star Turns Bonus feature and the Wild symbol. The bottom right corner is where you can find all the game button. The players will not be able to evade the game show feeling because there are several bet levels which raise the stake in the game. 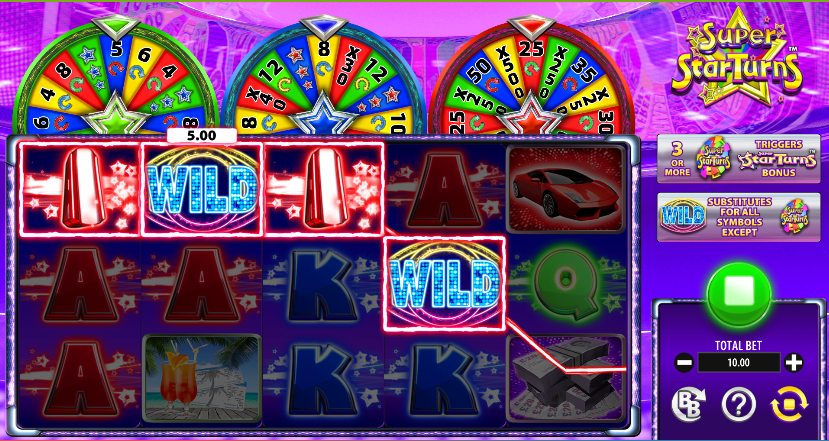 As with most online slots, the symbols in Super Star Turns slot can be split into low values and high values. The low-value symbols in the game include the three playing card symbols Q, K and A. They all award certain payouts for combinations of three, four and five matching symbols.

The high-value symbols consist of a couple of cocktails, a bottle of champagne, a stack of money and a luxury car. As with the low-value symbols, they also award payouts for combinations of three, four and five matching symbols on a payline.

Setting up the game is as easy as it gets because you need to decide only on one variable. Since the 40 paylines are fixed, you only need to decide on your total bet for the spin. You can do this by pressing the minus and plus buttons on the sides of the ‘TOTAL BET’ box. The smallest amount that can be selected is £0.10 up to the maximum of £500 per spin. Such betting range caters to both low-rollers and high-rollers. Once you’ve selected your total bet for the spin, press the green spin button to the right of the reels.

The Autospin button lets you set a number of automatic spins so that the reels turn on their own with the specified wager. The paytable is behind the question mark and lets you view information on all symbol payouts, the bonus feature and the Big Bet play option, as well as the paylines.

It is possible to try the gameplay of Super Star Turns slot before you decide to make any deposits. Just look for the Super Star Turns free play online and you can try the slot for free. The free play is almost completely identical to the real-money version of the slot. You can set your total bet for the spin, set off the reels, land winning combinations and trigger the bonus feature. However, since you’re playing with virtual funds, you can’t withdraw any eventual wins.

We recommend spinning at least 100 spins on the free play of Super Star Turns and try different amounts for the total bet. Thus, you can see how the game reacts to different bets and how much it pays out. There’s also a good possibility to trigger the bonus round during these 100 spins.

Winning the game involves hitting one of the big multipliers or a big symbol payout on a big bet. The amount of the win that you hit depends on the symbol you land and its number. The low-value symbols will get you smaller amounts, while the high-values will award higher payouts.

As for the symbols that are paid out in the base game, the most valuable one is the Wild. For a string on five matching symbols on a payline the prize is 250x. The next over is the luxury car, paying 5x multiplied by the winning bet. Next symbol is the stack of cash, paying 3x on the bet, and so on. During the Big Spin mode, the symbol pays are significantly enhanced, so those players who trigger a string of paying events may very well gain back the cost of the bonus.

Moreover, you can win some hefty payouts during the bonus features, which are described below. 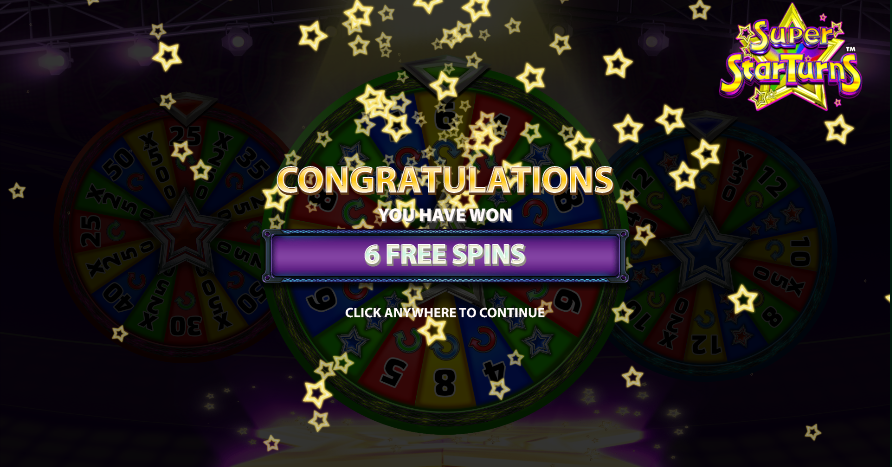 Landing three of the Super Star Turns scatters triggers the free spins bonus feature. You are awarded a spin on the green, blue or red wheel of fortune spinning to reveal the bonus prize. That prize could be a multiplier of 500x or 250x or 30x or other amounts, as well as free spins. The players get seven free spins during which the playing card symbols are removed, so there are only the high-paying picture symbols, as well as the Wild.

Super Star Turns is a high-variance online slot which means that you’ll land mostly smaller to moderate wins from time to time. However, if luck is on your side, and you land a big win, it could potentially be a huge one.

Super Star Turns is another great addition to Barcrest’s Big Bet games. It comes with an excellent show-game theme and excellent win potential. Watch out for the Wild symbol and the bonus feature, because they could be quite lucrative.

To start your Super Star Turns slot adventure, claim your welcome offer from those promoted here at Slotswise!