Take a walk through the bamboo forest and spot five panda bears to win 250x on the triggering bet. This is the top symbol pay on the Bamboo Rush slot unless we count the multiplier wilds that come with x2 and x3, and which can multiply on aggregate for the number of times they appear on the reels. This and a free spins bonus can produce hefty winnings for the lucky players out there. 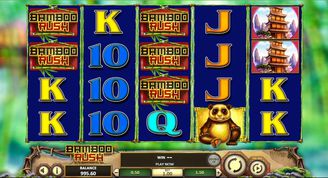 Enter the Bamboo Rush slot and play for a chance to win up to 250x multiplied by the winning bet, without counting the x2 and x3 stacking multipliers.

Towering pagodas, lotus flowers and bamboo, lots of bamboo, is found on the Chinese-themed Bamboo Rush slots. The idea is clear, connect the symbols that make up winning outcomes and gain cash from a slot game that may have something to it, even though it appears a bit bland.

But when we look at the producers behind the thing, and scope out the name Betsoft, we know there is definitely more to this slot. This is especially true for those who want to play low-stakes game but also have higher stakes as an option.

As for the arrangement of the reel-set there are four rows and five reels. These spin across 40 always active paylines that can turn up a free spins bonus on the Bamboo Rush slots, and one that can throw in multipliers of x2 and x3.

The graphics design features are not amazing but that doesn't seem to be a problem for players who don't care that an online slot must contain 3D graphics, video cuts and splash screens.

The game has a look and feel that reminds of video slots found at land casinos in the 2000s and thereabout. None of the symbols move or have any animated features added, unless they become part of a win, in which case they simply pulsate.

The musical theme offers a melody filled by string instruments and it is lively enough to make you forget about the plain graphics.

How to Play Bamboo Rush Slot

The adventure through the bamboo forest begins when you press the Spin button, which is found underneath the reels in the bottom right coner.

But before you do that, you may want to check out the default bet. You can choose from a range of bets in the bottom ticker, from what has become the adopted feature of Betsoft slots.

The sliding scale contains a smallest bet of £0.10 which goes in increments of the same amount before reaching £1.00. There are several medium stakes bets before the maximum bet of £10.00 per spin, making this a very conservative slot in the betting options it offers.

If you want to set the game working the reels on its own you can use the autoplay button. The farthest button in the bottom right opens up the options for the automatic spins.

You can choose up to 100 spins, set the cost per each one and set a totl cost, which helps mind your balance.

How to Win Bamboo Rush Slots

The game packs a mighty payout with one particular symbol which is an animal that isn't associated with any mighty capacities at all.

The Giant Panda delivers a prize of 250x multiplied by the winning bet when five of the same fall on one of the paylines.

Next in terms of value is the yin and yang symbol, paying 25x on the bet, followed by the pagoda, which is worth 12.5.

There are several other symbols that belong in the picture category, such as the lotus flower and the Bamboo Rush slots logo.

The rest are the high cards that start with the ten and end with the ace, paying amounts that are barely significant, but that can sustain your balance in the game nevertheless.

The bonus feature is triggered with the golden panda symbol. When three of these stop anywhere on the reel set the resulting bonus comes with 8 free spins and a payout that is relative to the bet.

In the best outcome five golden pandas pay 100x on the bet and throw the game into a 20 free spins bonus. During the bonus feature the Bamboo Rush slots can put up additional scatters that retrigger the game with three or more.

What is more, the Wild symbol comes with multipliers of x2 or x3 and these can appear on the reel-set in more than one instance, thereby multiplying each other to produce bigger, better winnings.

Those who are eager to play a demo version of the game and get a feel of the gameplay and the potential payouts can always look for a demo. You can turn to some of the online casinos on this page because a number of thee have demo games for users who hold an account.

But if that is too much of a thing to do, then simply locate the casino of your choice and go on to discover Bamboo Rush slot there by claiming a welcome offer. The game plays with just 10 pennies and you can try it all you want on a low-stakes such as this.

What we have here is a standard online slot by a well-known company. The top payout of 250x seems like a far-fetched thing but that panda symbol can get substituted by the wild. Keep in mind this symbol can expand on the reel. The bonus spins is where a lot can go down, especially with the multiplier wilds.

Claim a welcome offer to discover the Bamboo Rush slots at any of the online casinos on this page.