Are you ready to go back to the Jurassic era when dinosaurs were alive? Don’t worry; we think we’ll never be prepared for that! Still, Betsoft made sure to present the Dinosaur era in the best way possible by launching the Lava Gold slot, a title that captures the period when volcanoes started to be a major threat for these animals. The Lava Gold slot is powered by the Cluster Pays engine, while the real reel excitement happens during the Free Spins round. Find out more in our detailed Lava Gold slot review below.

The Lava Gold slot is paying tribute to a period when active volcanoes have become the main extinction of the dinosaurs as an animal kind. This reel play will offer you an exciting action played on a dynamic 5x5 grid where you can win up to 161x your bet during spins. It’s not much compared to the win potential of the other new releases, but since this is a low variance slot, it pays out quite well.

The main attraction of this slot is the free spins bonus game that’s triggered after you fill out the lava metre from the right side of the reels. Cluster pay combinations play out nicely during spins, where symbols must be horizontally or vertically connected. Curious to find out more? Carry on and see what the Lava Gold slot has to offer.

Embark on an exciting reel journey with the Lava Gold slot, a title that’s visually quite impressive when it comes to the storytelling segment. This game will introduce you to the Jurassic era, showing us probably the culmination before big volcano eruptions that lead to dinosaur extinction. However, this slot game focuses more on the part where you trigger frequent wins by creating winning clusters and filling that lava metre for a chance to activate the bonus. 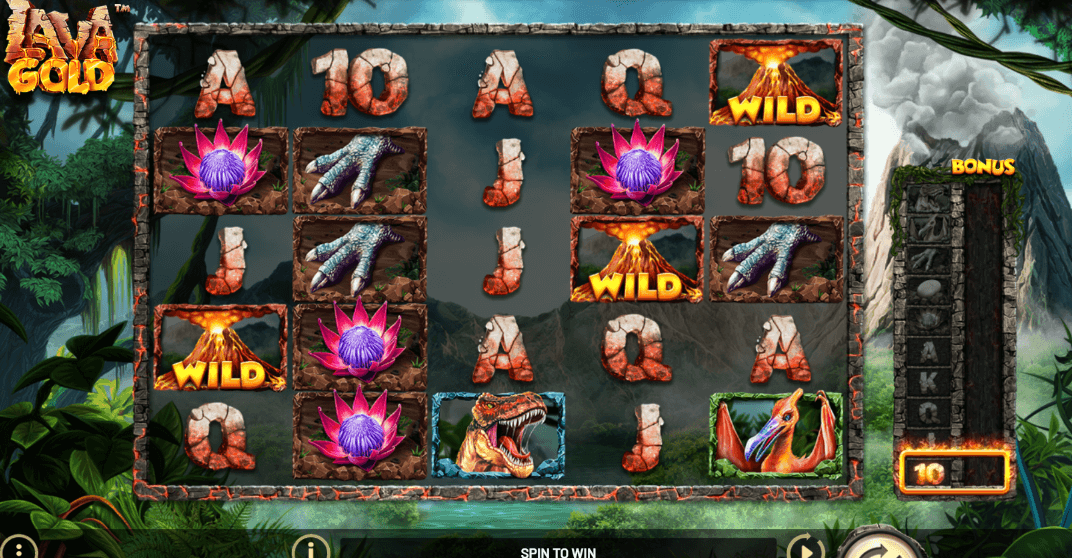 The Lava Gold slot plays on 5 reels and 5 rows. So, to form a winning combination, you’ll need to match at least 5 symbols for a cluster win. Winning clusters with each of the various symbols are collected in the Lava Metre. Each time you collect a relevant cluster, the metre fills, and you’re one step closer to the Free Spins round.

You can start spinning the reels of the Lava Gold slot at stake levels that range from £0.25 to £25 per spin. Suitable for beginners and those that prefer to play with low stakes, this reel play will enable frequent smaller wind during gameplay. Press the + and – buttons below the reel set and adjust your bet preferences.

Even though we’re visiting the era of the dinosaurs, there aren’t many things happening there in terms of in-game bonuses. Still, the clusters mechanic delivers a decent action on the grid, while the free spins game highlights the template.

As we already revealed in our intro, the Lava Gold slot is an adventure-themed title that revolves around the dinosaur era. Betsoft is known for producing high-quality slot games when it comes to graphics, and this title is no exception. You’ll find yourself in a dense jungle with erupted volcanoes in the background. The reels are transparent and framed with heated stones.

In general, this is a slot game with quality design and great attention to details regarding reel animations. The uplifting tribal sounds in the background perfectly complement the overall atmosphere.

When it comes to symbols, the Lava Soft slot includes the standard stone-made 10-A royals alongside dinosaur eggs, exotic flowers, volcanoes and dinosaur’s feet. The T-Rex and the Pterodactyl are the only representatives from the dinosaur species. The highest paying symbol in this collection is the T-Rex, paying you 15x your bet if you’re lucky to make a cluster of 11 symbols on the grid.

Finally, there’s a wild volcano symbol that serves as a substitute for other symbols to form winning clusters. All the reel action will take you closer to the heated lava, or if you prefer, to the top of the volcano metre when you’ll trigger the main bonus feature of this game.

The Lava Gold slot comes with a theoretical RTP of 96.02%, which is the industry standard. In addition, it’s a low to medium volatile game, so expect frequent, smaller wins during gameplay.

In total, you can end up winning 161x the stake from a single spin, which is pretty low compared to other slot games, but considering the variance, it’s balanced quite well. This setup would be perfect for players who don’t chase big potential prizes and feel more comfortable playing with low stakes. If you want to read more about RTP and variance models, check out our detailed Variance, Volatility and RTP guide.

We already mentioned that the Lava Gold slot is powered by the Cluster pays engine, which further helps in filling the Lava metre. Filling the Lava metre is vital for activating the Free Spins, which is the game's main bonus round. Let’s see how these features work in more detail:

To win, you need to match 5 or more symbols on adjacent reels and form a winning cluster. Then, the symbols that have participated in the win are removed and replaced with other symbols that drop to occupy the respective places. The Cluster sequence continues as longs as you form winning clusters or until all 25 positions on the grid are filled with the same symbol.

This feature is activated once you fill the Lava metre with suitable symbols. Once the metre is filled, you’ll be awarded 10 free spins. The metre is progressive and does not reset after a losing spin. It’s worth noting, though, that if you change the bet amount, the metre will reset, and you’ll have to start all over. With each free spin, there’s a multiplier that increases by 1x. This means that by the time you get to the tenth spin, you’ll have a 10x multiplier.

The Lava Gold slot is optimised to work on all mobile devices. Betsoft has created this slot with HTML5, which makes it adjustable to any operating system. As a result, the game loads perfectly on any mobile screen to provide you with quality gameplay.

If you like to explore different slot games produced by Betsoft, we’ve picked some of our recent favourites, so feel free to check them out and test their win potential. The first on our list is the Stacked slot game, a title revolving around the magician’s tricks and practical magic where you’ll play with secret tricks, multipliers and modifiers that will lead you to big wins.

Get familiar with the Chinese tradition and culture with Golden Horns, a slot game that celebrates the year of the Ox, where you might win a prize of up to 25,344x your bet. Or, explore the history of Ancient Greece with the Take Olympus slot and meet the Greek Gods that will trigger different bonuses and reel modifiers.

The Lava Gold slot is an excellent slot game with quality graphics engaging reel play. Even though the payout potential is relatively low, it still offers an impressive reel experience for a low-variance game. So, if you’re interested in meeting face to face with the animals that have marked an important era for our planet, you should definitely spin the reels of this slot game.

Play the Lava Gold slot and claim your welcome offer from our page, where we feature only the top-rated online casinos.