Take a trip to the Middle East and enjoy this Arabian-themed five-reel, 20 payline slot from Blueprint. Make a wish for some big cash and it might just be granted by the Genie of jackpots. Read our entire Genie Jackpots slot review, here! 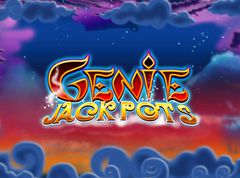 Take a trip to the Middle East and enjoy this Arabian-themed five-reel, 20 payline slot from Blueprint. Make a wish for some big cash and The Genie of Jackpots might just grant you what you want.

Enjoy a fairly good RTP, some nice graphics and symbols, plus some great gameplay when you spin on the Genie Jackpots slot. And if you were wondering where to play this game, we have a list of the best slots sites with Genie Jackpots.

Aside from the nicely designed playing card symbols, you can land higher value symbols including crossed scimitars, the genie's turban, a magic lamp and the game's logo.

Plus, the Genie Jackpots game’s wild symbol is a performing money and the bonus symbol is represented by the word.

The Genie Jackpots slot also appears to be one for players of all budget sizes, with bet sizes per spin ranging between 20p and £200! Although the 500x jackpot isn’t the most staggering we’ve seen, it does still give all players the chance to win an acceptable amount of cash.

Genie Jackpots slot surely isn’t the only or the first Arabian themed slot, but it definitely is one of the most exciting ones. In fact, it could be said that this is one of the games that put Blueprint Gaming on the map, along with other popular titles by this provider such as Big Banker slot, but we also need to mention one of their newest releases – Deal or No Deal: Double Action slot.

How To Play Genie Jackpots Slot

Before the spinning begins and genie-themed symbols are landed, you must select your coin size. This can be easily done by using the + and - buttons next to ‘Total Bet’.

Once you’ve chosen a coin size, which will be multiplied by the 20 paylines to establish your total stake, you can rub (click) the magic lamp in the bottom right corner of the screen to spin the reels.

Alternatively, you can use the ‘Autoplay’ feature. You can set the reels to spin automatically anywhere between 10 and 50 times in a row. Or until you launch the bonus feature!

This means you can give your finger a rest until the fun really starts and you can enjoy the Genie Jackpots bonus features!

How To Win Genie Jackpots Slot

Like all slots, landing combinations of reel symbols will result in a payout. The most lucrative symbols to land include the wild, paying out 500x your stake for a combination of five. The Genie Jackpots logo symbol will pay out 400x your stake.

These two symbols also pay out for combinations of just two symbols when landed on an active payline, although the rest require three or more symbols.

With a genie-themed slot, your wishes for bonus features would have to come true, wouldn’t they?

The Three Wishes Power Spin bonus feature is arguably the most exciting feature in Genie Jackpots. And it can be randomly triggered during any spin. Once you trigger it, three magic lamps will appear on the reels and you’ll need to select one, revealing one of the following rewards:

Any position will turn wild and respins once

Any position will turn wild with a 2x multiplier

The Genie Jackpots Bonus Feature Award is another welcome addition to the Genie Jackpots slot. This can be triggered whilst playing the Three Wishes Power Spin feature. When the magic carpet symbol lands on reels one, three and five, a number of magic carpets will appear and you must select them one and a time, helping the money move along them, picking up some cash prizes along the way. You may choose to ‘Collect’ at any time, taking your current winnings and heading back to the base game and ending the round. Better yet, if you make it to ‘Big Money’, you’ll be in for a treat and some incredible big wins!

Landing the bonus symbol on reels one and three, alongside the treasure chest symbol on reel five will reward you with a mystery prize multiplier of up to 100x your total stake. This bonus goes by the name: the Mystery Win Bonus.

As mentioned, players also have the opportunity to trigger and win the impressive Progressive Jackpot whilst playing the Three Wishes Power Spin bonus feature. This is arguably the Genie Jackpots slot game’s key feature, as the name might suggest. Hidden beneath one of the genie’s magic lamps, you can reveal this jackpot, which offers an astonishing amount of money for players lucky enough to uncover it!

Genie Jackpots is game that is available on mobile devices, so you’re not limited to playing from home, you can be anywhere, as long you have a stable internet connection on your smartphone or tablet. There won’t be a need to download an app, you can start playing directly, right after you open the site in your mobile browser, register if you haven’t already or log in if you’re already a member.

Unfortunately, Genie Jackpots doesn’t have the highest Return To Player. The Genie Jackpots RTP sits somewhere at 94.00%. However, this game features plenty of multipliers! The individual payouts are somewhat average and this slot appears to have low volatility, paying out little and often. Of course, that doesn't apply to the progressive jackpot, this is not a prize that is hit frequently. Click here to read more about the Genie Jackpots RTP!

Overall, we’d recommend giving Genie Jackpots a spin for the chance to land some impressive multipliers alongside some fun design and on-theme symbols. And it goes without saying, a progressive jackpot is never unpopular among slots players!

The genie theme is quite a common one within the slots scene, but that doesn’t stop us from enjoying it. We think it works fantastically and lends itself well to slots gaming.

The Genie Jackpots slot game also gives players plenty of ways to land winning combinations with 20 active paylines! Plus, with plenty of bonus features and the chance for players to win some impressive multipliers, Genie Jackpots is an online video game that offers the chance to win big cash.

If we had to suggest something, we think that the Genie Jackpots slot could do with a free spins feature, or at least the chance to win a few additional free spins throughout. Aside from that, the most attractive thing about this game is probably the progressive jackpot. With the amount constantly growing and ready to pay out at any given time, Genie Jackpots has to be a slot worth trying.

So, hurry to one of the online slot sites and try this game. We suggest doing that at one of the sites on the right side of this page. Make your choice, claim your welcome offer and have fun!

Is Genie Jackpots Megaways the same as the original game?

Both games are based on the same premise and by the same developer, however, the Megaways version is more recent and comes with a different payout system. Both Genie Jackpots slot and the Megaways release can be played by claiming a welcome offer from this page.

There are online casinos that host slot games in practice play mode. This enables players to play the desired game with free credits and try out the gameplay and features.

Are there bonus features in Genie Jackpot slot?

Players can see three different reel-modifiers triggered in the base game, which can add wild multipliers, multiple wilds and respins. In addition to these, the game also has the Mystery Win Bonus which awards an instant prize.