Play the Hooked slot for a chance to catch 15 lobsters or swordfish or sea bass and get up to 1000x multiplied by the winning bet. The game plays on 25 paylines and five reels which spin out two bonus features: the fish on with multiplier prizes and the free spins bonus. This is a low variance game that has a theoretical RTP of 95.49% 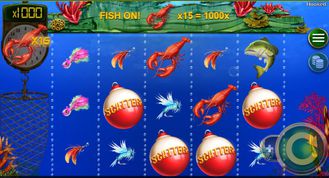 You don't have to operate a fishing boat in order to catch a big fish. The slots experts at Booming Games are providing the pleasure of fishing from the comfort of your home on the Hooked slot.

Get in the mood by throwing some exquisite flies in the water with the hope that a large bass or a swordfish bites in fives to bring 30x and 40x on the payline bet.

The game involves a scale that weighs your catch and as the winnings pile you stand a chance of winning serious multipliers on the triggering bet. This is possible with the game throwing out an entire reel-set filled with the same type of fish.

Besides this bonus win, Hooked comes with a free spins bonus and a wild symbol. The reel adventure unfolds on a reel-set of three rows and five reels that spin across 25 always-active paylines.

In terms of the graphics design the game doesn't pretend to be anything other than just a regular slot that provides fun-loving adventure on its standard 3x5 layout. However, when fishing for details we do find tiny bits that make a difference between an uneventful game and one that manages to impress with its modest appearance.

Hooked slots does remind of the Fishin' Frenzy slot a bit, but it is a unique game in its right. The fish and bait symbols are jolly on the reels, especially during the Fish On bonus game when each fish flutters its fins as it goes into the mesh. Win outcomes are marked by a square surrounding the symbols that are involved.

The slots experts at Booming Games have included a musical theme that sings along to this relaxing fishing outing.

How to Play Hooked Slot

The game starts with the push of the big round and green Spin button which is located in the bottom right corner of the screen. To the right of this button is the plus button that pulls out a menu with options that relate to the gameplay.

This is where you can toggle on the turbo option, which causes the reels to spin and stop faster. To the right of it is the play button that has the number 50, which stands for that many automatic spins.

Another look to the right is BET MAX, to crank up the bet to the game's maximum of £500.00 per spin. And finally. to toggle the sounds and the music on or off, use the relevant buttons.

Choosing the bet per spin requires selecting the coin stacks button that is in the top right corner of the screen. This is where the players can choose a bet from the list which starts with the minimum of £0.25 per spin, which is one penny per the 25 paylines.

How to Win Hooked Slots

Wins are made with three or more matching symbols posting on any one, or more, of the game's 25 paylines. The symbols are split in two categories. There are the low and medium paying fishing flies and the fish and the lobster group which pays the amounts that we wish to see more often on the reels.

Each of these outcomes is for the optimal payout with five matching symbols.

The game has two bonus features. One is a round of free spins triggered by the buoyant ball symbol. Three of the same start the game with five spins, four bring 10 free spin and five bring 15. The bonus feature can be retriggered.

Both during the base game and the free spins feature, the game can trigger the Fish On bonus. One of the high-paying symbols (lobster, bass and swordfish) can appear swimming across the reels.

An arm appears, with a net in the hand, trying to capture the fish. If it succeeds the Fish On starts where only the symbol that was caught appears on the reels. This is a gathering game, so the more you pick the bigger the prize is.

The three-tier jackpot prizes are paid for 15 of the same, or a reel-set filled with that symbol. In the event, the lobster brings 1000x, the swordfish 500x and the bass 250x multiplied by the triggering bet.

The players can expect the game at hand becoming available along with its official release. Best place to ook are the online casinos that offer free play demo slots to registered players.

It isn’t quite Fishin’ Frenzy but it may be even better. That all depends on the payout mathematics, for those who count. The game does have a handful of symbols that pay good amounts but it is the Fish On bonus that can translate into some more serious wins.

Discover the Hooked slots by claiming a welcome offer right from this page and play at top notch online casinos.