A game of wilds makes the scarabs fly and stick on the reel set and improve the chances for a winning outcome. Players can bet across nine paylines and for a chance to land winning outcomes of up to 1000x the bet. This is a high variance game that comes with a free spins bonus feature, made by Booming Games. 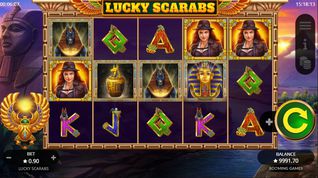 Booming Games is the maker of an Ancient Egypt game that puts the scarab symbol at the forefront. You are following a bold adventurer on her heels and straight into Egyptian tombs filled to the brim with artifacts. This is another game that delves into the mythology of this ancient civilization and does that well enough so as to make Lucky Scarabs an entertaining game.

Players will find nine paylines which spells out a semi-dynamic reel adventure that is not keen on making the spins exceedingly speedy. Instead, players can see the high variance at work in the base game, where Lucky Scarabs slot can post two different kinds of wild symbols on the reel set. There is also a free spins bonus which is where players can seek improved odds for landing a big win.

Right from the get-go, the game looks and feels like a classical payline slot because of the nine paylines, but it offers the sort of graphics big studios tend to make for their best games.

The reel set is wrapped by a golden frame that echoes the style and splendor of the ancient Egyptian world. The left side of the screen is marked by a colossal statue of a pharaoh and below is a golden scarab amulet that shines and inaugurates all the scarab wilds that can land on the reels.

Winning outcomes on the Lucky Scarabs slot are marked with animation as each of the picture symbols has been instilled with movement. This is especially true for the explorer, Anubis and the sarcophagus symbols. These represent the high pays on the paytable.

The pretty graphic design and the timeless theme are bound by two specific figures - the theoretical return to player and variance. The first has a value of 95.39% for the Lucky Scarabs RTP while the other information spells out high variance.

This means players may get a taste of the game's maximum payout potential, which is 1000x your bet from a single bet. That's quite decent but it is a very rare event for this sum to trigger from a single spin. Those who play Lucky Scarabs are going to see medium and small wins occurring at a greater frequency while the big wins are going to be sparse.

Nevertheless, the game seems to be balanced well because it can trigger payouts at a regular frequency and that is always refreshing for a high variance slot.

Gameplay and Features on Lucky Scarabs

In terms of extra features, we'll begin by noting that the wild symbol in both its Sticky Wild and Random Wild appearance can pay £100.00 for five of a kind. It is no wonder that the game is called that because the scarabs can make a huge difference for the outcome of that lucky spin and it can pay if the substitute symbol is numerous enough.

The game can distribute between one and ten sticky wild symbols while the reels are spinning. These wilds cover the symbols where they land, but they connect with potential winning outcomes that remain in view.

The main feature, however, is a free spins bonus. Players need to get three scatter symbols, which are represented by golden treasure chests topped by a statue of Bastet the cat god. These symbols can land on the odd-numbered reels to award eight free spins. The sticky and random wilds can trigger during the free spins bonus too.

Slot players can enjoy this Booming Games production on mobile and the 3x5 layout of the reel set fits pretty well on most iOS and Android devices today. Players can play Lucky Scarabs on personal computers also, as well as tablets, so the game is primed for online gaming on the go and while at full home leisure.

Is there a Jackpot on Lucky Scarabs Slot

The game doesn't have an instant jackpot prize, however, players can win up to 1000x. That figure is a very rare outcome but getting a win even halfway there is still quite solid and it can happen from a single spin. For that to occur you need to be in the free spins bonus and land multiple random and sticky wild symbols on more than one occasion.

The company has been busy at work making an assortment of exciting games. Some of our slots experts' favourites lately are the Wild Energy slot, the dynamite-heavy Danger Zone and Chicken Party which is an unlikely game to call a favourite, but it is, thanks to the added row of four reels that can turn up special symbols.

We thought this is going to be another game in the Book Of style, but it isn't. It may be lacking an expanding symbol in the free spins bonus but the wild symbol galore that can trigger randomly on any spin is good enough for us and it also matches the high variance odds towards the potential big win.

Discover the Lucky Scarabs slots by claiming a welcome offer right from this page and play at top rated online casinos.