Discover what happens when the right snail wins the race and falls on the reels in six positions. This snail racing adventure comes with six reels, bonus features and bonus game prize of up to 50x on the winning bet. Although it's all about the snails, the Snail Race slot is a fast-paced reel action that may surprise you. 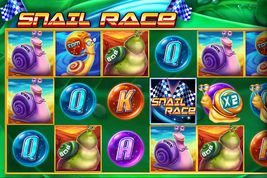 Snail racing has been a betting sport for some time, but Booming Games created the Snail Race slots to bring us double the fun and potential wins.

Are you ready to join Bob, Tim and Max on their loony race through the lettuce patch? Make no mistake, this race isn't all silly fun and games, as there are prizes to be won and reputations to be bolstered. Symbol payouts of 120x and multipliers of up to 50x can be made on the winning bets

The game does amaze in more than one respect, both in terms of the idea but also because of the offering of features and a reel-set that is less common. The players spin for the potential win on an oblong three rows and six reels, which have an additional reel of three snail houses that dispatch a racing snail each.

A bonus feature has the three snails racing on their own respective track that carries a multiplier of a different amount.

The wins are made from left to right when three or more matching symbols stop on one or more of the game's paylines. The snails themselves are not only emissaries of potential multiplier wins, but are also wild symbols.

We can see that Booming Games have been getting better and better since the company was founded. The graphics layout on the Snail Race slot is quite engaging and the game is fully animated, especially the snails, whose role is to reach the end of the race and bring back the wins.

The musical theme complements lively and colorful graphics, while the snails themselves comprise much of the action. The rest of the paytable offers the high cards as low-valued symbols, and these symbols were also given an anima.

How to Play Snail Race Slot

The race can start as soon as you press the big round Spin button, but before you send the reels spinning on the default bet you should check out the available bets. The range of wagers starts at £0.20 and ends at £100.00 per spin.

Snail Race slots offers an autoplay mode which can be set from the plus button that is to the left of Spin. As is typical for most other slots by Booming Games, the autospins mode offers 50 automatic spins, with the optional speedy spins, but without any stops, such as stop on a single win or total loss.

How to Win Snail Race Slots

Winning in the game means your snails are part of the races as frequently as possible. Here is the thing: not only do the snails bring symbol wins, they are also wild. Each time the walking multiplier snail symbol makes a win the game releases another set of the snail wilds that go in the opposite direction. On the opposite side of the leftmost reel are the snail houses that dispatch the walking wild multipliers of x2 and x3.

There can be more than one such wild interacting with the snail symbols. The best outcomes are possible when all three snails are released from their houses, and especially when the multipliers are x3 instead of x1 or x2.

The most valuable symbol in the Snail Race slots is the snail with 60x on the bet win, yet this symbol shares the podium with Max, the speedy purple snail whose six symbol wins pay 60x as well.

Bob the snail brings 50x and Tom does 40x. Both of these amounts are for six symbol wins.

The card symbols include only queen, king and ace, and in each instance the six symbol win pays 10x, 15x and 20x respectively.

There is one bonus feature that certainly defines the game, and that is the Snail Race Bonus. This is when the three racing snails are pitched in a race between one another. Each of the tracks in the bonus comes with a prize. The first snail reaching the end line triggers the prize respective to his track.

The slots experts at Booming Games are looking to impress so they have found a niche for which they’ve made a stellar release. Little doubt, the Snail Race slot will be released as a demo and the game ought to remain on the slots rosters of many online casinos.

We’ve been given a preview of the Snail Race slot but there is a lot more to be seen from this game. Once the game drops it will certainly turn heads, albeit not with the same speed that racing hares do. Nevertheless, Snail Race slot promises a fun, dynamic action on the reels.

Claim a welcome offer and discover the Snail Race slot at the online casinos on this page.