Reel Deal Diner slot is an online game that fans of traditional US burger joints will really enjoy. It has a retro feel to it, that kind of reminds of the American sitcom Happy Days without the Fonz on the reels. Reel Deal Diner has a bonus round that can get you a certain number of free spins, as well as coin wins added to your balance.

Reel Deal Diner slot is a five-reel, 25paylineonlineslotfrom Gamesys which is themed according to the classic diners of America. The game dishes out tasty fun starting with just £0.01 on one activepaylineup to £25 for all 25paylines. Reel Deal Diner comes with only one bonus feature which can potentially get you free spins and cash rewards. When spinning the reels of Reel Deal Diner, you can win the game’s maximum payout of 400,000 coins!

Reel Deal Diner slots from Gamesys is the food-themed online slot that pays a tribute to the American diners. It comes with a reel set of five reels in three rows and a total of 25paylines. It comes with one bonus feature, Meal Deal Bonus, which can get you free spins and coin awards.

As mentioned, the game has an American diner theme with the famous hamburgers, fries and milkshakes. The reels are placed inside a simplered frame with the logo of the game at the top of the screen and thepaylineson the sides of the reels. The background represents the stainless steel usually found as the food-preparing surface in these American food joints.

When it comes to the symbols on the reels of Reel Deal Diner slots, they can be divided into low-value and high-value symbols. The low values include six standard playing card symbols, 9, 10, J, Q, K and A, each awarding payouts for combinations of three, four and five matching symbols.

The high-value symbols include three diner employees awarding payouts for combinations of two, three, four and five identical symbols on the reels.

These three symbols are the game’s bonus symbols. 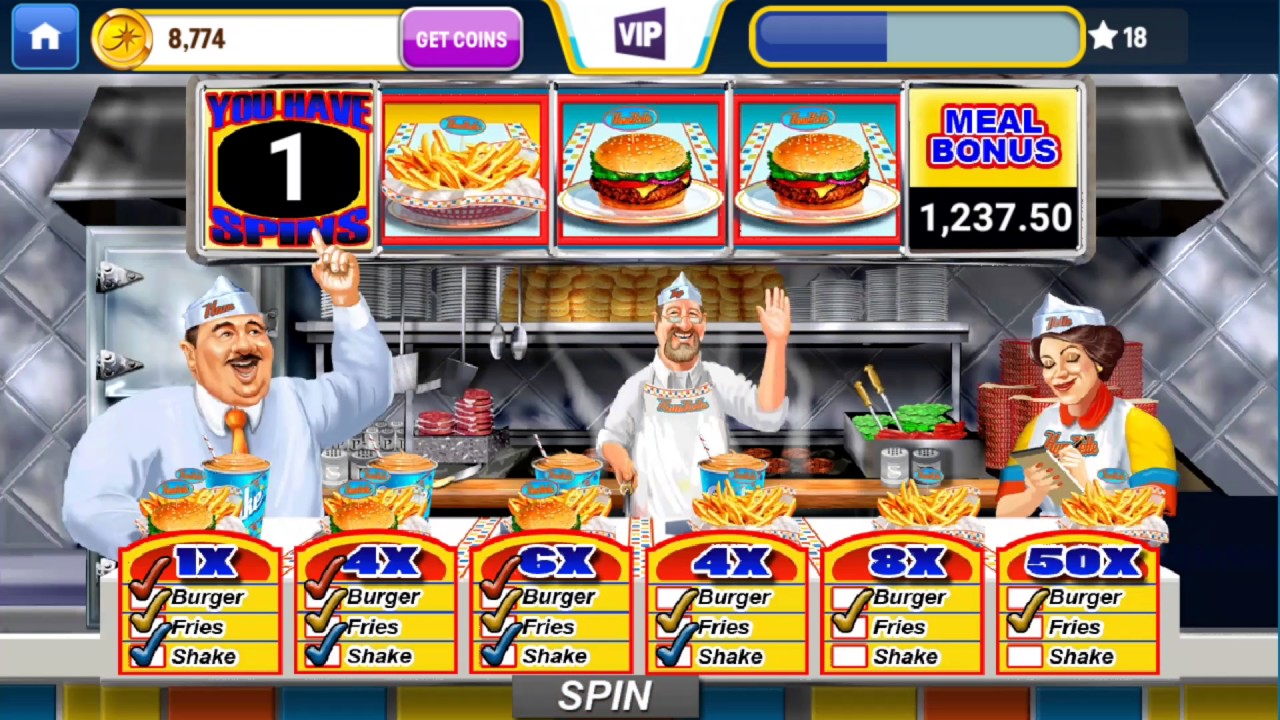 How To Play Reel Deal Diner

As with all three-reel slots, Reel Deal Diner slot is a very straightforward and easy-to-play game since all buttons are placed at the bottom of the screen.

Before spinning the reel set of Reel Deal Diner slot, you need to set your total wager for the spins. In Reel Deal Diner, this is done by setting the ‘LINES’ and ‘COIN SIZE’ variable.

By pressing the “+” and ”-” buttons of the ‘LINES’ box, you can select anywhere between 1 and 25 activepaylinesto play your bet across.

Once you’ve set your bet for the spin, you can set off the reel set by pressing the green ‘SPIN’ button in the bottom right corner of the screen.

Payouts in Reel Deal Diner slots are awarded by landing combinations of matching symbols on thepaylines. 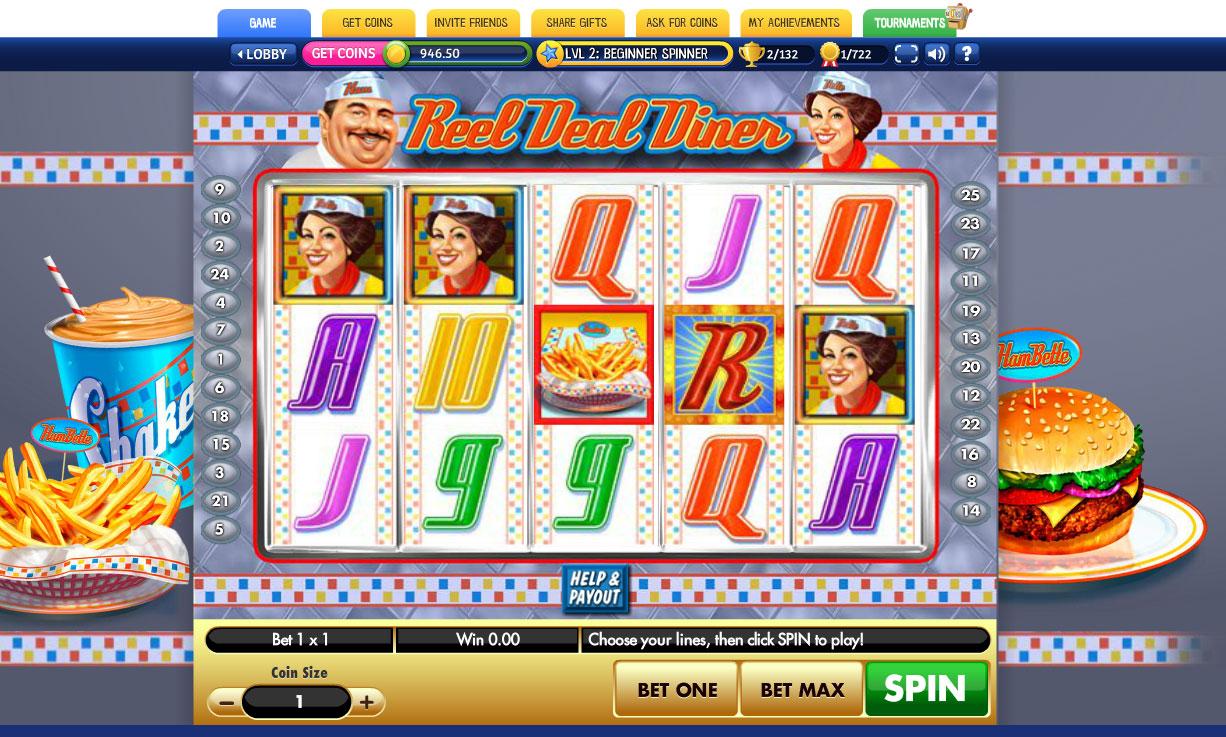 When it comes to the high-value symbols in Reel Deal Diner, they all award the same payouts. All three of them award payouts of 5, 20, 100 and 500 for combinations of two, three, four and five identical symbols in the reels.

The highest payouts in Reel Deal Diner are awarded by the Reel Deal Diner ‘R’ logo with 10, 50, 200 and 2,000 for two, three, four and five matching symbols on an activepayline.

As mentioned in the text above, Reel Deal Diner slot includes only one bonus feature which can get you excellent rewards.

If you land three of the scatter symbols anywhere in view on reels number two, three and four, you’ll trigger the Meal Deal Bonus game. Initially, the game will award you six free spins. To get coin wins, each time you press the “SPIN” button, the small reel set above the cooks will spin and award you various bonus meals made up of a combination containing hamburger, fries and milkshake. When the round ends, all your winnings from the Reel Deal Diner bonus are added together.

So, as you can see, the free spins round can get you more play time by awarding you free spins which means you get more for your money. 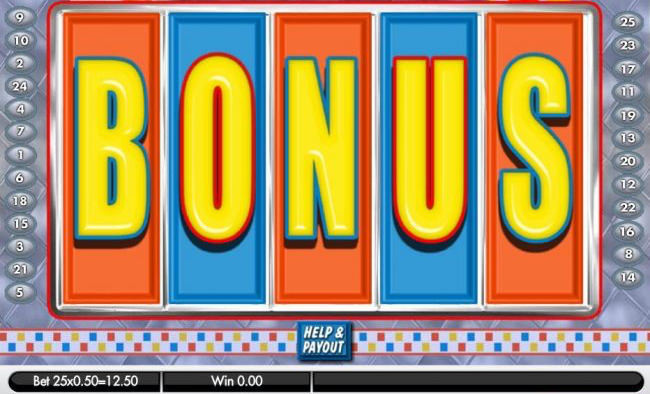 Gamesys has around 20 years of experience in the online gaming industry, so it doesn't come as a surprise that they've created some of the most played online video slots. This company was established back in 2001 in the UK and since then they have become one of the leading forces in this industry. If you want to read more about other Gamesys slots, you are in the right place. Keep reading to get more info on these three Gamesys slot. If you want to get even more details on these games, make sure that you click on the links below.

Around the Reels in 80 Wilds

As you've probably guessed by now, this slot is based on the famous novel from 1873, Around the World in 80 Days. This is a pretty new slot, released in January 2019. Around the Reels in 80 Wilds slot has three rows, five reels and 25 fixed paylines. What makes this game even more interesting is the bonus feature. This Gamesys slot comes with an RTP of 94.93%.

Reel Deal Diner slot is an online game that fans of traditional US burger joints will really enjoy. It has a retro feel to it, that kind of reminds of the American sitcom Happy Days without the Fonz on the reels. Reel Deal Diner has a bonus round that can get you a certain number of free spins, as well ascoinwins added to your balance. The RTP percentage for Reel Deal Diner is not known, but what we know is that with the bet per spin ranging between £0.01 - £200.00, you can have a shot at the game’s jackpot of 400,000 coins.

Try Reel Deal Diner today and don’t forget to claim your welcome offer from one of the sites promoted at SlotsWise!