Piggy Bank Megaways is a 6 reel slot that has the classic piggy bank as a main characteristic of the design. Each winning combination triggers the cascade features, followed by three other features: Max Megaways, Bonus Add, and Piggy Rich Cash Respin. Read our in-depth Piggy Bank Megaways slot review to find out how you can trigger them and more. 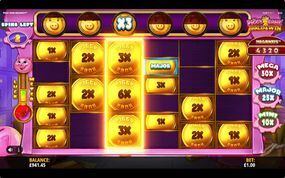 Even though the theme is a kind of deja vu in the iGaming industry, its provider managed to stay as original as possible in terms of design and features. In some way, the Piggy Bank Megaways slot reminds us of other similarly titled slots, but the domination of the pink colour in the design is very unique.

Piggy Bank Megaways is a money-themed slot. The whole outlook of the game is very cheerful. It isn’t the first time we see a pink piggy bank in the focus, but iSoftBet managed to do a good job when it comes to design and graphics.

Here we have interesting animations as well: glowing coins, a piggy bank that runs in front of the reels, cascading reels disappearing in the form of a piggy bank and more. The music is unusual, but the same as the design, is it cheerful, while symbols look very nice and match the theme.

Card royals A, K, Q, J, 10, and 9, joined by golden stars in the back, are low paying symbols, where 6 of them are worth 0.5x t 1.5x. The hammer, the cash bundles, the piggy banks and the slot logo as high-paying symbols can bring you 2x to 25x your stake for six of a kind. The wild appears on reels 2-5 only to substitute all paying symbols. This symbol is represented by three pigs laughing, while the scatter symbol is a golden coin.

Piggy Bank Megaways RTP is 95.98% which is slightly below the industry standard of 96.0%. The Bonus Buy option alters the RTP increasing it up to 97.0%, but this option isn’t available for UK players. Its medium volatility means winnings may be more frequent, but not extremely big. Read our full guide to find out more about variance, volatility, and RTP.

The fun can start even in the base game, where every winning combination triggers the cascade feature. No free spins here though, but there is the Piggy Rich Cash Respin feature. During the base game, you can also trigger Max Megaways and Bonus Add features.

You can trigger the Max Megaways feature on any paid spin in the base game. It is followed by great background animations when all 117,649 Megaways paylines become available.

In the base game, you can also trigger the Bonus Add feature that adds scatter to the reels. It can happen randomly, where a unique background animation announces that there is a chance you trigger the Piggy Rich Cash Respins.

If you manage to land five or more scatters anywhere in view on the reels, you are awarded 3 initial respins. You can play them on special reels and the only symbol that can land there is the scatter. The scatters triggering the feature are locked in the position for the duration of the feature. 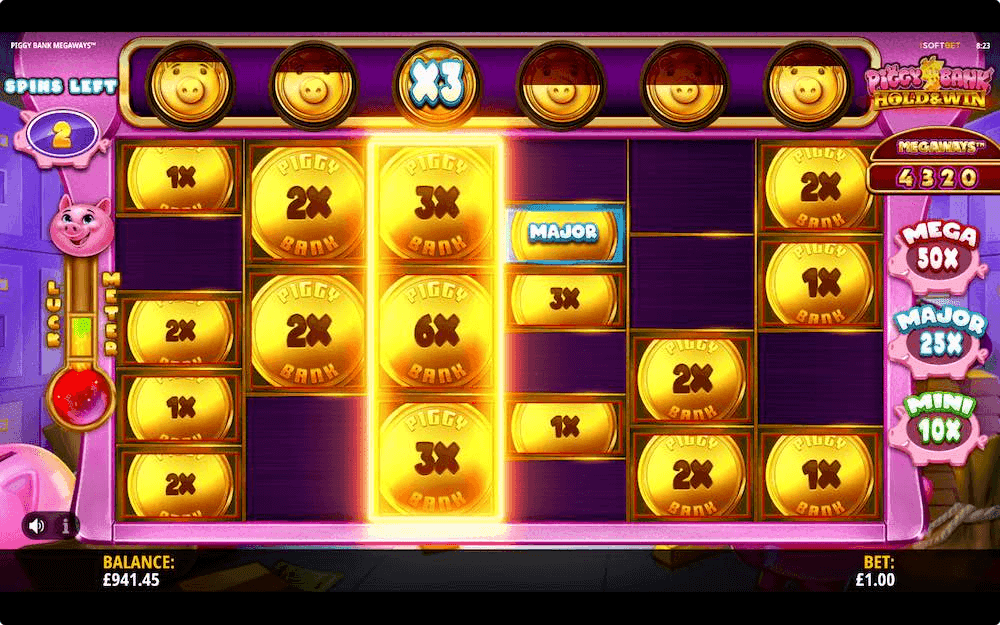 Land at least one more scatter, and the number of respin is reset to three. Any type of scatters, Mini, Major or Mega, that lands on the reels brings you an award shown in the relevant panel. If you fill an entire reel with scatters, you can unlock a multiplier equal to the number of the symbols on the reels. In the end, the total amount of all values is paid out.

You can play Piggy Bank Megaways slot on a mobile device on a different OS. iSoftBet used HTML5 for the development of the game, so it is compatible with Android, iOs, and Windows. It looks great on mobile and runs pretty well.

Tending to create amazing gaming experiences, iSoftBet has Megaways slots as one of its main focuses. Several Megaways slots can be a great choice and in this section, we recommend the following:

The Rubi Megaways - The Rubi Megaways is a retro-themed slot that can bring you 35,000x your stake. Played on 6 reels with three features including Free Spins, Mystery Symbols and Cascading Wins, this game can be a great choice.

Mighty Stallion - iSoftBet adds another title to their Hold and Win slot series with Native American motifs. With a medium-high variance and an average RTP of 96.0%, this 5-reel slot has 2 features, Free Spins and Hold and Win.