Get your holy water, wooden pikes and silver bullets and join the posse in the Hell'Sing slot. This 40 payline game has five reels and a reel adventure that's all about catching werewolves and vampires. The magic potions turn up random multipliers and the mystery symbol can bring about a prize of 25x multiplied by the winning bet, or 5000 the max, without the multipliers. There are several bonus features and a lot of fun on the way to the potential wins. 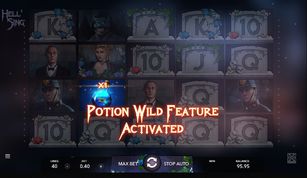 Play the Hell’sing slot for a chance to win up to 5000x on the payline stake or 25x multiplied by the winning bet.

Dr. Abraham Van Helsing is a fictional character from the famed novel Dracula. The name certainly rings a bell because there is a very famous movie series with the same name, and we have an online slot developed by the experts at Mascot Gaming.

There are some macabre characters as part of the picture symbols which add a cryptic feel to the gameplay. Those who opt for this game will have the chance to play for a number of features, including a free spins bonuses which involve hunting some of the beasts on the screen.

The payouts in the base game are made from left to right when three or more symbols fall on one of the 40 always active paylines. The outcomes may turn up even more bonuses as the Hell'sing slot seems ripe with them. So let's see what else is there and how we can play this game.

The graphics design of this game is offers art that's been drawn decently and colored-in in the style of comic books. There are several picture symbols that represent various beasts and characters and on the other end of the prize spectrum there are the high cards, which are chiseled on a set of tombstones.

Hell'sing slot gets exceptionally high marks for the musical theme. As the reels spin the players are drawn inside the murky look and feel of an adventure that is filled by someone looking to discover the occult. The string instruments set the mood for the spins and the potential wins.

How to Play Hell’Sing Slot

The players get a reel-set of 40 always active paylines and a minimum bet of £0.40 which is extrapolated from the smallest line bet of one penny per payline. The various sums of the bet can be selected from the bottom left corner.

There are several amounts for the bet and once you have gone through them, you'll reach the Hell'sing maximum bet of £200.00, which is a payline bet of £5.00.

To set the reels spinning in this vampire and werewolf hunting adventure, push the round spin button underneath the third reel. In order to set the game in the autospins mode, select the Autoplay wording which can be found to the right of the other button.

This doesn't come with any options to select the number of spins or even set an amount for a total loss limit or for a total win limit. What you get is the reels spinning until you press the Stop Auto button.

How to Win Hell’sing Slots

All of the symbol wins can be seen in the paytable, which is accessed from the menu button on the left hand side of the reels.

This is where we can use the plus and minus buttons of the bet setting in order to view the prize for any outcome of three or more of the same symbols.

The most valuable symbol is the demon-ish figure that has eyes glowing blue and is known to expand on the reels. This symbol is kept good company by a werewolf, which also expands and also delivers the same amount, which is 7.5x multiplied by the winning bet.

Now this doesn't seem like a whole lot, but keep in mind, Hell'sing slot is a low variance slot.

Also, there are two other symbols that can deliver prizes of 5x or above and these are the bobby and the lady. The absolute top paying symbol is the mystery, paying 25x.

Any of the top payouts are made with five of the same symbols falling on one of the 40 paylines.

The bonus feature is triggered when there are three or more of the mystery scatter symbols. More than three of these anywhere on the screen will trigger the bonus but the prize will be bigger as this symbol pays 25x the bet.

The trade-off is to either take the winnings or the bonus feature and there are several of these.

There is a Vampire Hunt with ten free spins. A vampire symbol becomes wild and transform all human symbols into wild vampires.

The Werewolf Hunt feature plays with ten free spns where the werewolf becomes wild and transforms all potions into wilds, where random multipliers of up to 3x are given.

Then there is the Beasts Respin and the Potion Respin bonuses which are free spins that can deliver multipliers.

The game doesn’t have the most affordable of smallest spins with 0.40 per one, so if you are debating whether to check out this slot, then you may do some research and discover what online casino holds demos of which the Hell’sing game is part.

The players will find that this low variance slot packs serious wins in the paytable. Only one symbol goes above 10x and that is the scatter, for which it is rare to appear in five positions on the reels. The several bonus features may tip the impressions towards a game worth exploring.

Claim a welcome offer to play the Hell’sing slots at one of the online casinos on this page.