Relive the 108 Heroes Saga with this amazing Microgaming video slot game. Play on three rows and five reels in this online slot themed around an ancient China epic. The game has a wild symbol and a scatter-bonus, with a top bet of 75 pounds. Two of the heroes pay 2500x for five matching symbols and can be substituted by the wild. The scatter pays the game's jackpot prize of 30,000x coins on the line bet and there are 10 free spins and a pick-me bonus.

108 Heroes slot is a low-variance mystical online slot from MIcrogaming which uses plenty of Easter lore for its gameplay. The game is loosely based on the 14th-century tale The 108 Stars of Destiny which tells the story of imprisoned stars that come back to the world to fight for justice.

The slot’s reel set comes equipped with five reels and 15 paylines and a bet per spin ranging between £0.15-£75.00. The gameplay is enhanced by the use of bonus features which include a free-spins round and a Chest bonus round. 108 Heroes slot advertises an RTP rate of solid 97.00%, which makes it an above-average RTP slot.

As mentioned in the introduction, 108 Heroes from Microgaming is based on an oriental theme. It is played across a five-reel, 15-payline set with a couple of bonus features including free spins and pick and click game.

The design of the game is pretty simple with the reel set placed inside a golden frame with the game logo placed on the top of the frame. The background is also quite simplistic featuring a red canvas with a pattern of black branches and pink flowers. The black bar at the bottom is where you can find all buttons and displays.

When the symbols on the reels are in questions, they can be divided into two groups. The low-value symbols consist of standard playing card symbols including Q, K and A. The high-value symbols are five on-theme symbols representing various characters from the game. The five unnamed heroes can bring you the highest payouts with their respective weapon. All symbols award payouts for combinations of three, four and five matching symbols.

The game’s logo is the wild symbol and it substitutes for all other symbols to form a winning combo, except for the chest bonus symbol and the Chinese script scatter.

108 Heroes slot is a very straightforward and easy-to-play game since all buttons are placed at the bottom of the screen.

Before spinning the reel set of 108 Heroes, you need to set your total stake for the spin. Since the 15 paylines of the game are fixed, what remains to be set before the spinning of the reels is the “BET” variable.

By pressing the “BET” button under reel four, you can set your bet value. As stated in the sections above, the bet per spin values range between £0.15-£75.00 making the game suitable for all kinds of players. If you want to play with the maximum bet available, without opening the “BET” menu, you can do this by pressing the “MAX BET” button on the left of the “Spin” button.

Once you have selected your stake for the spins, you can spin the reel set of 108 Heroes slots by pressing the green ‘Spin’ button, with an inverted arrow, in the bottom centre of the screen.

If you are not too keen on pressing ‘Spin’ after each spin, you can always go for the autoplay feature the game offers. By pressing the “AUTO PLAY” button in on the right of the “Spin” button, you can select a certain number of rounds to be played automatically. Once you make your selection, press the ‘START’ button and the reels start spinning. You can stop the AUTOPLAY mode at any given time by pressing the “Stop” button. 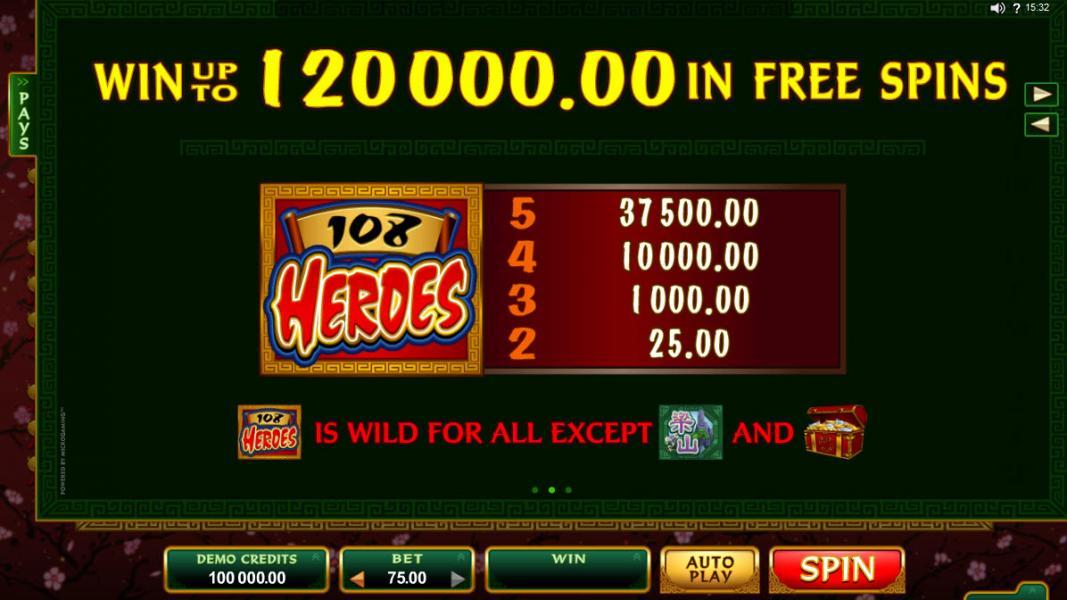 How To Win 108 Heroes Slots

As stated in the previous sections, 108 Heroes comes with a couple of bonus rounds that can get you free spins and other additional extras. The game's two bonus rounds are as follows:

The first of the 108 Heroes bonus features is the free spins round. The round is triggered by landing at least three of the Chinese script scatter symbols anywhere on the reels. You will receive ten free spins and all your wins during this round will get a x3 multiplier. A great thing is that the feature can be retriggered if you manage to land three or more of the Chinese scatter symbols on the reels.

The free spins round is a nice feature that can get you not just free spins, but more possibilities to land a winning combo during the spins. The great thing is that these rounds are "on the house" and you don’t pay for them.

The Chest Bonus game is triggered by landing at least three of the chest bonus scatter symbols on an active payline starting from the leftmost reel to the right. You will be taken to a new screen where you see twelve treasure chests. Depending on the number of triggering symbols, you’ll get to pick three, four or five of the chests on display. This feature can also be retriggered from the free spins round

108 Heroes slots is an online game that is based on an interesting theme. The slot comes with interesting animations and two different bonus features that can help you get the jackpot of 125x your bet. The game comes with an RTP rate of solid 97.00%.

Try 108 Heroes today and don’t forget to claim your welcome offer from one of the sites promoted on SlotsWise!