Experience the metamorphosis of butterflies and play a slot game of this kind that could bring cash with butterflies. The top single-event payout is 240x on the winning bet, and there are two bonus features. The butterfly staxx feature occurs during the base game, and may lead to a screen filled with butterflies plus x2 and x3 multipliers. The theoretical RTP is 96.35%. 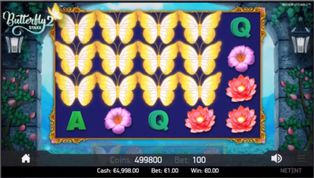 Get a reel-set filled with butterflies for a chance to win 240x multiplied by the winning bet, plus a respin game or a pick-me game in the Butterfly Staxx 2 slot.

Just as Play'n GO released a slot themed on the marvellous world of insects, called Firefly Frenzy, NetEnt are following up with their second edition of the Butterfly Staxx slot. This time around, we get another game of a similar theme, one that follows the beautiful process of metamorphosis, through which the pupae become the beautiful butterflies, which could result in cash winnings for the players.

The reel action on the Butterfly Staxx 2 slot occurs on five reels, four rows and 40 always-active paylines. This edition follows the reel action of the original slot game, so the gameplay features are similar although it does come enhanced with two bonus features. The players are invited to select a bet from a wide range of amounts, which enables anyone to get on with this game and enjoy it.

How to Play Butterfly Staxx 2 Slot

Start playing the game with the press of the Spin button, however, before that, you should see if the default bet is something you would like to bet per spin. The bets can be set by using the by now much seen controls board that is present in all new NetEnt slots. The smallest bet per spin is £0.25 and the highest bet is £1250 per spin. Why such a high bet we can't be sure, but NetEnt sometimes like to provide the option for the high rollers out there.

The autospin button is there at anyone's disposal, as it allows the players to use one of the number presets that send the reels spinning for that number of automatic turns. With each turn the player's balance gets a deduction as per the specified bet. There is another option that can set a single win limit or a loss limit which when met stops the automatic spins. To stop the game press the autospin button again.

The paytable is part of every slot game that gets released today, and that is the case with Butterfly Staxx 2 slot. The paytable opens up a view into the symbol pays, the game's rules, what triggers the bonus features and what may unfold thereof.

How to Win Butterfly Staxx 2 Slot

This symbol can result in the entire reel-set becoming filled with it, which pays the top payout of 240x multiplied by the winning bet. At first this number doesn't seem impressive but then if we consider the huge range of bets that ends with a four digit amount, we see why this game may be popular. Anyone daring to play large sums, plays for the chance to get a screen filled with butterflies.

The feature which is part of the base game involves the stacked butterfly reels, which is taken from the first edition of the game. Hence the name. Just as a reminder, if the first and the second reels are covered in butterflies, these will start moving to the right, leaving more butterflies in their wake, resulting in x2 and x3 multipliers.

The bonus features are triggered with the landing of the scatter symbol, when it does so on reels one, three and five at the same time. This brings forth two options - the free spins game and the pick-me game. In the latter, the players get to pick from a set of butterflies, which reveals numbers and multipliers, which are then added, the math done, and the final winnings pocketed in the balance.

The free spins game involves the butterfly symbol, which, we said, is the most important in the game and everything revolves around it. The cocoon symbols can be sleeping or active. Those that are active will turn into butterflies and the others may wake up during the subsequent respins.

The game has been given a theoretical return to player percentage of 96.35% which means, Butterfly Staxx 2 is above the industry’s average of 95.00%. On the other hand, this value is slightly lower compared to the original game, which has an RTP of 96.80%.

The game has been fitted for mobile. In fact, it has been developed with mobile in mind, so as long as you have either an android or apple device, it will run on the go. Another thing to consider is whether your online casino is mobile friendly, and if it isn’t then one of the casinos on this page does offer that ability, and the players can claim a welcome bonus to play.

This game has a low variance, that is, low volatility, meaning there are small and potentially medium winnings paid more often, with a big win at a greater distance in time. That being said, the game’s symbols don’t really pay a whole lot, but they may accumulate, unless a dry spell doesn’t result in the staxx feature getting lit.

Play this and other NetEnt slots at the online casinos of our choice - all excellent in their offering of slots. Claim a welcome offer to start today.