Join the pigs that fly in this amazing NetEnt game where by activating the free spins bonus you can activate as many as 3,125 ways to win. 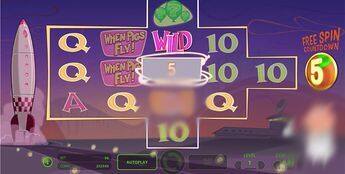 Pigs surely don’t fly in the real world, but in the world of online slots impossible things become possible. NetEnt have chosen to use the popular adynaton as a title for a slot game that they released back in the summer of 2016. When Pigs Fly slots sound and look appealing, therefore it is hardly surprising that this has been one of NetEnt’s premier and most played games, ever since the day of its release. Once they saw how popular When Pigs Fly slot became,NetEnt decided to do more of the same and has since released other slot games which included similar features and options as When Pigs Fly.

This is a rather unusual and quirky, but nevertheless an exciting and fun game, or maybe its precise because of its unusualness and uniqueness that When Pigs Fly slot is so fun. With up to 3,125 ways to win that this game features, it is sure much easier for you to hit a winning combination than it is for a pig to rise to the skies.

The game has a unique and original layout and the characters are fun and neatly designed. You will immediately notice the pig on the right side of the reels, as if there are any doubts what this game is about. The design is somewhat retro, but you can immediately notice that a lot of effort has been put into the visual effects and the general visual representation of the game. In fact, that might be one of the key reasons for the game’s popularity.

If you like sci-fi games with a great visual appeal and amazing effects, then you will surely enjoy ‘flying with the pigs’, especially since the sound effects are equally refined and in accordance with the overall theme. You will be able to hear the space ships and for a moment you’ll feel like you are in some sort of a futuristic society where everything is possible, even for pigs to fly. The game’s features and the other aspects of the When Pigs Fly slot are equally appealing.

How To Play When Pigs Fly Slots

When Pigs Fly slots feature five reels and five rows, but the most unusual element is the fact that not all reels feature the same number of symbols. There are quite a few games that feature a non-standard grid and it is always refreshing to see and to play a game that offers something unique and original, a feature that is not common or, so to say, boring.

The game features between 45 and 3,125 ways to win, and such a difference between the minimum and the maximum number of paylines isn’t something that’s too common, so in a way, When Pigs Fly is original in a wide range of ways. The game can be played with a minimum of 50p, which is just one quid for two spins, whereas the maximum stake is limited to £100.

The control panel is standard, so if you have previously played any slot games by NetEnt, you will have no issues with When Pigs Fly slots, as you’ll notice that all standard buttons are there, the bet level, the coin value, the spin button, the auto play, as well as the max bet option.

The game starts with one symbol on the first and the last reels, three symbols each on the second and the fourth reel and five symbols in the central reel. However, that number can change and based on the increase in the number of symbols that are placed on the reels, the number of possible winning combinations will also grow.

How To Win When Pigs Fly

You will need a minimum of three symbols across an active payline in When Pigs Fly slots to activate a winning combination. The standard card symbols pay a lot less than the thematic symbols. A pig’s cap with wings, green balloons with the number 7 on them, a bar symbol, a lady pig and Mr pig are among the most valuable symbols, together with the When Pigs Fly slot logo.

In addition to the standard symbols you will also see a wild symbol, which actually features the word ‘wild’ written in pink and this symbol can substitute all symbols. The wild can appear anywhere apart from the first reel in the main game, whereas in the bonus free spins game, it can appear everywhere, on every reel.

With every winning combination you get another chance to win, and while many games offer a Re-spins bonus, there is something special about this game. Namely, when you manage to hit a winning combination in When Pigs Fly, the reels will re-spin, but you will also see an additional position opening on the reels. The extra symbol that appears during this re-spin feature gives you more chances of a second win.

The fifth spin activates 1,875 winning combinations and if you are fortunate enough to retrigger another win during your fifth spin you will manage to activate the special When Pigs Fly slot free spins bonus. Eight free spins are awarded and there will be a total of 3,125 winning combinations, which is the maximum number of ways to win. In free spins mode there are five reels and five rows with five symbols per each reel.

Our When Pigs Fly Review

When Pigs Fly features a rather high RTP rate of 97% and that’s really the icing on the cake. This makes this slot not just fun and exciting, but also quite rewarding, considering that it is rather hard to find a game with an RTP as high as that. The average online slot RTP is about 95% and that says a lot.

If you find this game amusing and you’d like to give it a try, there plenty of SlotsWise partner casino that are waiting for you. Remember, via SlotsWise you can claim a special welcome bonus and start your experience with a bit of extra cash