Robots, futuristic symbols and a lot more sci-fi stuff on the reels of WIld-O-Tron 300 slot. If that sounds good to you, this is a game that can be played at many of our partner sites. 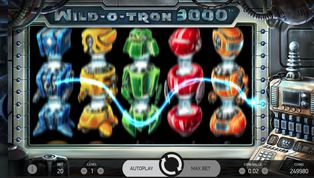 Sci-fi has been one of the most popular genres in the past decades, regardless whether we’re talking about films, books, series, shows, or even online slots. Even though there are earlier instances of iconic sci-fi works like Twenty Thousand Leagues Under the Seas by Jules Verne, we can safely say that the 1960s were the decade when sci-fi became pretty mainstream. In a way, even though it is futuristic, Wild-O-Tron 3000 slot reflects this epoch and the 60s approach to science fiction.

The Wild-O-Tron 3000 slot takes place in a science lab where you can see a lot of robots. The robots are actually the symbols that appear on the reels and they are in different colours. When it comes to settings and the control panel it doesn’t look too different from other NetEnt titles. In terms of functionality it is a typical NetEnt slot. The buttons are all there, placed below the reels, so if you’re looking to play Wild-O-Tron 3000 slot you will find it quite straightforward, especially if you have played any NetEnt games before.

Robots are not just on the reels, you will also notice them everywhere on the screen. Some of the robots are consisted of more than one part, so sometimes all its parts may appear on a single reel. The music is also a bit futuristic, but with a slight cheerful feel about it.

As with all other online slots, you will first need to set your wager and then you can spin the reels. The play button is located centrally on the control panel and the stake is controlled via the bet level and coin value buttons. The maximum bet level is ten, whereas the top coin value is 1.

So, if you increase the level to the max and the coin value to the max, your wager would be £200. We would recommend caution if you are to play with that much money per spin though, as it is not advisable to wager more than 1% or 2% of your total bankroll on a single spin.

Still, if you wish to wager the maximum amount, you just need to click the ‘Max Bet’ button and your stake will be set to £200. In addition, there’s also an ‘autoplay’ button that you can use if you wish to set the reels to spin automatically, without your additional intervention. Choose the desired number of spins but remember that you can always switch it off and go back to making each wager manually.

There’s a sound button placed below the info button, use it if you want to toggle the music and the sound effects off and listen to whatever you want or play the game in silence. You might notice a thunder/lightning button and this one is used if you like to darken the background behind the reels.

There are 20 paylines in Wild-O-Tron-3000 slot, and a payline can be activated only if at least three instances of the same robot across a payline, provided that the combination begins at the leftmost reel towards the rightmost one and not the other way around.

There are seven robots and the red futuristic one is the most valuable symbol in Wild-O-Tron slots, whereas the least valuable one looks like a robotic scarecrow.

The minimum amount that you can win is five coins and this prize is paid out for a combination of three of the least valuable robots across a payline. The maximum prize that can be won in the main game without triggering a bonus is 300 coins and this prize is won when you get five red robots across a payline. The other robots are a lot less valuable.

In addition to the standard robot symbols there’s also a special wild symbol that substitutes all robots, but it also triggers a win if a winning combination is consisted only of wilds.

This is an online slot that features only one bonus and this bonus game is conveniently named – Wild-O-Tron feature. During this feature a minimum of one and a maximum of six robots are turned into wilds, which generates large opportunities for winning combinations to be triggered.

During this bonus, all the lights that are shown beside the reels are lit up and get the colours of the featured symbols.

If you like robots, sci-fi and stuff like that you will definitely like Wild-O-Tron 300 slot by NetEnt. The game’s RTP is set at 96.01% whereas the game’s volatility is medium. This game is available on desktop and mobile devices.

Register with one of our partner sites, claim your bonus and you can play Wild-O-Tron slot right away